“Let me control the media and I will turn any nation into a herd of pigs.” – Joseph Goebbels, Nazi Propaganda minister. Someone at NBC should review the history.

Recently, I came across an article by NBC News calling out Alex Jones for having a long history of inflammatory, anti-LGBTQ speech, and sure enough, they had me in the mix of their propaganda-hit piece. When I first saw the article, I knew exactly what I was dealing with. The propaganda was written by none other than transgender and “useful idiot” Alexander Kacala (John 8:44).

Not that the corporate owned media has any credibility, but you would think that they would know when enough is enough. Apparently not. 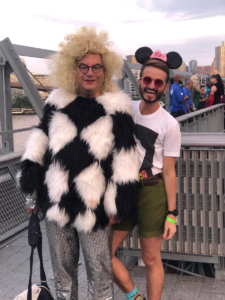 Alexander Kacala of NBC, right, next to harlequin 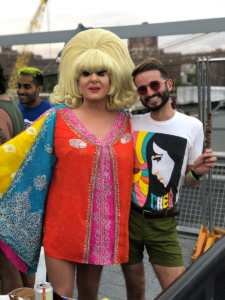 Alexander might lean to corruption in the courts and say, it is no longer the law! I ask Mr. Kacala, who said that? The Supreme Court did!

Do you mean the same Supreme Court that has been attempting to tear down America’s Christian heritage for the last 60 years through un-constitutional and illegal oligarchies? Slaves are made in such ways (John 8:34).

Many of the injustices should have been removed and indicted long ago for operating outside of their scope of authority (Article 3 & Article 2, Section 4, U.S. Constitution).

The proper relationship of God and the law

“No enactment of man can be considered law unless it conforms to the law of God.” – Judge William Blackstone.

As a matter of fact, in every state preamble, it starts off acknowledging the God of Abraham, Isaac and Jacob, who gave the law and His law clearly condemns what these people advocate (Exodus 20).

Furthermore, if Mr. Kacala is referring to the likes of Elena Kagan, who was merely placed as a Supreme Court justice for one reason and one reason only: to advocate on the behalf of other sodomites that are being used as political battering rams to upend America’s godly Constitution to give way to Sharia law, well then, by all means, let’s tell Americans a little history of Elena Kagan.

Elena Kagan is the former dean of students at Harvard. Contrary to Harvard’s founding mottos, “For Christ and the Church” and “For the glory of Christ,” Kagan is known for “queerifying Harvard.”

Elena Kagan has never judged a case a day in her life, yet Obama, unqualified for office himself, saw fit to “qualify” her on the Supreme Court bench…just in time for the Court to review homosexual “marriage.”

NBC and the law

Just think, NBC’s transgender and propagandist Andrew Kacala, who is on the wrong side of the law, wants to tell you who is persecuting them by acting out in an illegal and inflammatory fashion (Deut 22:5) by playing the victim. However, the fact is that he, along with NBC, is transgressing American law (Psalm 94:20).

According to Adolph Hitler’s propagandist Joseph Goebbels, if he had control of the media, he would turn any nation into a herd of pigs. It is true that pigs beget other pigs as they unify in filling up on the mire. Yet, they need to come to the realization that not everyone is filling up with their media-fed mire.

NAFTA replaced – at least with Mexico