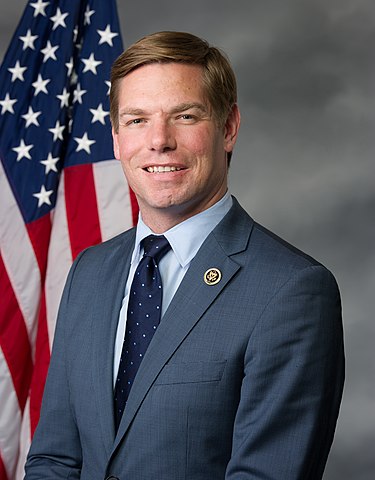 Those who routinely conflate the Democrat and Republican Parties in the United States today ought to reconsider. Never mind the soon-to-expand Democrat House leadership. This new gemstone collection comes from a mid-level Democrat Representative named Eric Swalwell (D-Calif.-15th)

Eric Michael Swalwell, Jr., took the old seat of Rep. Fortney “Pete” Stark of California. The district that became the 15th is an obvious safe seat. It happens to comprise the Eastern “Bay Area” of San Francisco. (Which means the voters who elect and re-elect Nancy Pelosi are their neighbors.) Any district that would elect and re-elect “Pete” Stark, one should suspect of having an habitual voter base of some of the least temperate voters in America. That’s because “Pete” Stark earned a reputation for some of the least temperate statements on the floor of the House. His Wikipedia article lists a few gems. This YouTube video has more:

For that particular outburst the House almost censured him. He swallowed his gorge and apologized—sort of. But even The Washington Post had to admit he often “shot from the lip.” They listed several ingots, like blaming his “Jewish colleagues” for Operation Desert Shield/Storm in 1991. In short, “Pete” Stark rattled off more inflammatory sayings than did William Jennings Bryan when campaigning against President William McKinley.

Swalwell takes up the mantle of Stark

Eric Swalwell has proved even less temperate and more vituperative and vitriolic than did Stark. He proved this in the context of the most dangerous Democrat ideology of all: gun control.

Last May he wrote in USA Today that the federal government should:

The congressman focused primarily on the price tag: anywhere from $3 billion to $15 billion U.S. He made totally short shrift of the Second Amendment. He made much of a split in the circuits since the landmark D.C. v. Heller decision. The Second, Fourth, and Seventh Circuits have ruled against gun owners, and the D.C. appeals court undercut its own ruling (Heller) later. Swalwell seemed to think those courts had vitiated the Second Amendment enough that his bill could survive a Supreme Court challenge. (Or he did until Justice Anthony Kennedy handed down several conservative votes, then retired. Justice Brett Kavanaugh might not agree with Swalwell’s analysis, and Swalwell likely knows it now.) In fact Swalwell said flatly the Second Amendment must yield to “the right to live.” (See also here from NBC.)

A Democrat takes rhetoric to the next level

A diligent engine search shows that the issue rested with this op-ed for over six months. Then a Twitter user named John Cardillo noticed it this week for the first time. He then sent this tweet:

Make no mistake, Democrats want to eradicate the Second Amendment, ban and seize all guns, and have all power rest with the state.

These people are dangerously obsessed with power. https://t.co/f1AS6Me0ko

Note what Mr. Cardillo said: the Democrat ideology calls for erasing the Second Amendment, confiscating weapons, and letting “all power rest with the State.” No one can infer anything else from Swalwell’s column, in fact.

And then Rep. Swalwell flew the true colors of himself and the Democrat Party:

And it would be a short war my friend. The government has nukes. Too many of them. But they’re legit. I’m sure if we talked we could find common ground to protect our families and communities.

You read that right: “It would be a short war my friend. The government has nukes.”

Absent that sentence, one could infer from his next sentence, about “talking” to “find common ground,” an attempt at reconciliation. Of course the only “common ground” is that the likely targets of the occasional mass murderer should also “carry.” Even six-shot pistols in the hands of half the targets would give anyone pause. Even one carrying an AR-18 or M-16 or AK-47 would think twice about attacking such a crowd.

But of course Rep. Swalwell won’t think of that. John Cardillo inferred correctly: he wants all power to rest with the State. And now Swalwell takes the Democrat ideology to a new, perhaps absurd, certainly dangerous level. Dare challenge the State, and the State will answer with nuclear weapons.

Not for the first time has someone raised the specter of nuclear weapons deciding any question of gun control. Jack Webb, the Great Rhabdouchophile of Hollywood, raised that specter on his television show, Dragnet. Read the relevant dialogue in Season 3, Episode 1, “Public Affairs: DR-07.” A veteran stands up to protest mandatory gun registration:

VETERAN: Look at it this way. We register all our guns. A foreign enemy invades us. The same thing will happen here, as happens in country after country. The invading army just goes to the files, and then goes around confiscating all the weapons. [Here SERGEANT JOE FRIDAY and OFFICER BILL GANNON shake their heads, as if to say, “Jee-zum! What a moron!”] We’ll be left defenseless! I want to protect my country!” [Applause from the STUDIO AUDIENCE]

OFF. GANNON: Do you really believe that might happen?

VETERAN: You bet I do. Like I said, it’s happened before in other parts of the world.

OFF. GANNON: If that ever happens here in this nuclear age, I doubt if any of us will be around for any weapon collecting. Will we?

As one can see, Jack Webb believed as many naively do: that war on American soil would inevitably be nuclear. He also believed the existence of nuclear and other modern weapons changed the dynamic of “militia” and “self defense.” “In this nuclear age,” the militia, well- or ill-regulated, becomes obsolete. Therefore the Second Amendment is of no moment.

The “Twitterverse” exploded. Joe Biggs lost no time in shooting back:

High ranking Democrat Eric Swalwell calls for confiscation of semi-automatic rifles using $15billion of taxpayer dollars to do it and proposes criminally prosecuting those who don’t participate: https://t.co/tBzZXztkIU #2A

Did any of those nations have to face 180 million gun owners? Also, we're still fighting in Afghanistan. In fact, it's the longest war in American history. Who's the enemy? A bunch of regular people with simple guns.

But user “Bulldog” gave the most reasoned response of all so far:

“DeplorableTrumpFan” warned Rep. Swalwell not to threaten a crushing war of assertion of authority. The authority would lose:

(The Thomas Jefferson Memorial Foundation thinks Jefferson never said that. And Ms. Lee or a Twitter moderator scrubbed the tweet an hour ago at the time of this writing.)

At least one user called on Rep. Swalwell to resign:

You need to resign. No part of your oath involves killing US citizens, let alone millions.#SoLongSwalwell

Furthermore, a veteran warned that the United States Army would not fire on civilians:

When someone challenged that veteran on that, he made the point more forcefully:

(Maybe this supports Robert A. Heinlein’s point that the best republic would give the vote only to veterans. By which he meant all veterans, not merely retired officers. See Starship Troopers, 1959.)

Eric Swalwell clearly missed the point. By mid-day he protested:

America’s gun debate in one thread.

1) I propose a buy-back of assault weapons

Sarcasm? That definition might play in San Fran Sicko. It does not play further east.

To dismiss Eric Swalwell’s attitude merely because he hails from San Francisco is too facile. One can well understand! After all, today San Francisco must publish maps to help tourists avoid stepping on piles of human waste! One must forgive anyone for supposing that anyone elected from any part of San Francisco must have some of that substance for brains.

The problem: Eric Swalwell is not the only Democrat to feel this way. True, no one has seconded Swalwell’s specific remark “The government has nukes.” But recall David Hogg, who might—or might not—have graduated from Marjory Stoneman Douglass High School in Parkland, Fla. He decried the Second Amendment as a license to kill. Or so one must infer from his remarks. (CNAV repeats the warning about foul language.)

This illustrates the basic threat of “democracy” and why the United States is, and ought to stay, a republic. “Democracy” is two wolves and a lamb voting on what to have for dinner. It is also two thieves and a householder voting on whether to let everyone arm himself. And if the answer is no, democracy is a vote on who may keep and bear arms, and who mayn’t.

Eric Swalwell has a further problem. As a legislator in a republic, he should know better. He has threatened to use nuclear force against those with whom he disagrees. Thus he displays the contempt the Democrat Party has for life itself. But he also signals that, should he and his side prevail, only one thing will stop them. And that would be a pre-emptive strike. No patriot would call for a nuclear strike, of course. Such a thing would totally defeat the purpose. But patriots might conclude that they must seize Washington, D.C. by force to prevent the Eric Swalwells from ordering a nuclear strike against the citizenry.

Happily, they will not have to do this. Eric Swalwell can propose all he wants. The Senate will never so much as send such a gun-buyback bill to the White House. President Trump would veto it in a heartbeat if they even thought to do this.

But that won’t stop the new Democrat majority from passing it anyway. If they do, patriots everywhere should remember Eric Swalwell’s word. Every rank-and-file Democrat must now ask himself: did I sign on for this? Nuclear combat toe-to-toe with Republicans? One can reasonably hope enough will say, I don’t think so! And even more will “#Walkaway” from the Democrat Party.

[…] Mr. Swalwell, aren’t you the Congressman who threatened nuclear retaliation against gun […]

[…] CNAV wonders whether Elon could restore the tweets of certain famous accounts the mods have suspended. Marjorie Taylor Greene owned one. So did a user who famously told Eric Swalwell that he was asking for civil war with his gun-control proposals. To which Swalwell infamously replied, […]