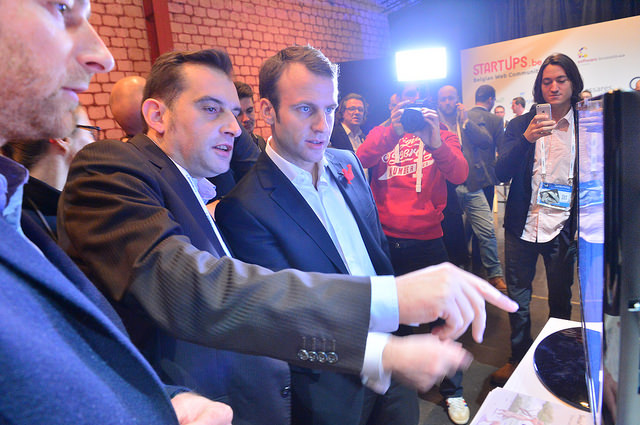 Hello, this is Darrell Castle with today’s Castle Report. Today I will be talking about the climate change conference in Europe and the protests over increased taxation that eventually turned into riots in Paris. First, I pause to remember the 77th anniversary of the Day of Infamy that was the attack by Japanese naval and air forces against the United States base at Pearl Harbor 77 years ago.

Meanwhile, anti-Macron riots have been taking place across France and threatening to spread across Europe. It seems that the French people are becoming disenchanted with the promises of the French welfare state. Perhaps they are, as Margaret Thatcher famously said, running out of other peoples’ money. The riots have morphed from a working and middle class revolt against high fuel taxes into a general protest against the high cost of living in France and against French President Emmanuel Macron, whose popularity has been falling.

World leaders, or at least the ones whose countries signed the 2015 Paris climate change agreement, have been meeting recently in Katowice, Poland, a coal mining town in the Silesia region of Poland. About half of all the coal miners in the E.U. live there. It’s interesting that they would choose that region for their climate change conference but they did. The conference is for all the nations to reaffirm their commitment to the goals of the accord and they did except the United States.

The climate change guidelines are really designed to punish the working people of Western Nations since the world’s worst polluters, China and India, are given a pass and the third world nations are to be provided 100 billion annually by the Western nations. Why wouldn’t China and India be cheerleaders for the agreement because it handicaps their competitors and rewards them? The third world is very excited because they profit directly from the labor of workers in the West.

The President of France, Emmanuel Macron, decided that he would bring France into compliance with the agreement prior to the conference and also use France as an example so he imposed punitive tax increases on gasoline and diesel fuel as well as electricity. My understanding is that the tax brought the price of the American equivalent of a gallon of gas to about $7.50. Macron said his goal was to get people out of their cars and trucks and also avoid a worldwide catastrophe resulting from carbonization of the atmosphere.

Any rational person can take a brief look at those goals and see that they are out of touch with reality. The French people saw through what was happening to them pretty quickly and took their frustrations to the streets. The protesters put on yellow vests to show solidarity and emphasize their numbers. The initial protests had no obvious effect on Macron so the protesters turned them into a riot. Protesters burned cars, a Paris tradition, smashed windows, looted stores, and vandalized the Arc de Triomphe with graffiti.

Police sympathize with the rioters

More than 100 people have been injured and hundreds arrested. Macron, of course, said those responsible for the riots would pay. A French government spokesman blamed the riots escalating from protests on people who hijacked the protests. When asked why thousands of French police could not prevent the damage especially to a French landmark like the Arc, he said, “yesterday we made a choice—to protect people before material goods.” The fact is that the police took off their helmets in symbolic sympathy with the protesters.

A spokesman for the protesters said that the fuel tax rise was simply the straw that broke the camel’s back. We’ve had enough, he said, “we have low salaries and pay too much tax and the combination is creating more and more poverty.” On the other side are the government ministers and the President with their fabulous salaries. That Frenchman is starting to understand what is really happening around the world and was willing to put his body where his mouth is.

Anti- elite protests spread to other French cities as people across France went into the streets to express their rage and frustration over the new burdens on the working and middle classes. The rioters seem to get it now, and getting it means there is no benefit to them now, or in the future, for what the government is doing to them.

Macron blinks in the face of the riots

However, two weeks of mass protests by the French People did nothing to move the emotions of Emmanuel Macron, but when they were forced to resort to violence that got his attention. The French government announced on Tuesday, December 4th that it will temporarily suspend the carbon tax plan that triggered the protests. I suppose that temporarily means that the government reserves the authority to loot the people again in the future.

President Macron did not make the announcement but sent Prime Minister Philippe to make it instead. He said “No tax is worth putting in danger the unity of the nation.” I can think of something worth putting the unity of the nation in danger and that would be the horrible, catastrophic climate disaster about to befall the planet. That is it would be worth it, if true. The postponement really doesn’t resolve Macron’s dilemma, it only postpones it for six months. He will soon have to decide if he is going to continue putting the goals of the world’s elite ahead of the French people, the French economy, and the unity of France. I can think of many things that threaten the unity of France besides the riots, such as the E.U. and French immigration policies.

I suppose President Macron sent his Prime Minister to make the announcement and use the term “unity of the nation” because it would sound really odd for him to say it. He sees himself as more of a global citizen than citizen of the nation he was elected to serve. He also poked a little French jibe at Donald Trump when at a gathering of world leaders to commemorate the 100th anniversary of the end of World War l when he said, “patriotism is the exact opposite of nationalism. Nationalism is a betrayal of patriotism.” This was, of course, an attack on Trump’s America First policies. Maybe the French people would like to put France first for a while, since Macron’s approval rating has fallen to 23%.

Globalists, such as Emmanuel Macron, reject the very idea of national sovereignty. Everything has to be some kind of universal consensus, preferably with official U.N. documents to present as evidence of its moral right to convey special legitimacy on any decision of the ruling elite. President Trump had the last thought though, as he went on Twitter and wrote that he was “glad that my friend Emmanuel Macron and the protesters in Paris have agreed with the conclusion I reached two years ago. The Paris Agreement is fatally flawed because it raises the price of energy for responsible countries while whitewashing some of the worst polluters.”

Meanwhile, here in America, things aren’t very much different since the standard of living relative to inflation has been falling for the middle class and working people for at least 40 years. The only way people can begin to keep up is through credit and a day of reckoning always comes for that choice. I imagine it’s very similar for the people of other Western nations. For evidence, I point out that the protests were spreading to Denmark until the Danish police went out and arrested the leader of the movement.

The end of World War II ushered in a golden age for the middle class in America. It was the only nation not destroyed by war, and so it had to build for the entire world. A family of four could have a good life with only one working and one, usually the wife, keeping the home and raising the family. That would reserve the wife as a safety valve if things turned bad for the husband’s job. She could go to work to save the family from ruin in a pinch. They could afford a home and a car in which they could take one family vacation per year.

…to a two-tiered society

Middle class income grew every year until the Vietnam War brought it all crashing down. The final blow came in 1971 when we left the gold standard for credit and fiat money. Now, in the unlikely case where there are two family members, both must work full-time just to make ends meet. One works to pay the bills and one works to pay the taxes, and even then it’s often not enough.

The middle class is being hollowed out and driven to the bottom with a few fortunate ones landing at the top. Businesses that cater to middle class customers are failing because their customer base is disappearing. Sears and J.C. Penney are two prime examples. Businesses that cater to higher incomes such as Neiman-Marcus and Sacs Fifth Avenue are fine, as are those catering to lower incomes, such as the dollar type of stores.

People across the world can sense that something is wrong, although they may not put it into words. The people of France understand it and they are making their feelings known. In addition to middle class economic destruction, we have become so divided we can no longer form a consensus to restrain the elites that rule us in any way. They mouth their words of consolation then do whatever they want. It’s hard to tell sometimes, whether you are seeing the actual reality or the false one created for us to live in.

Finally, folks, the French people did not have to elect Emmanuel Macron, a man who publicly said that French culture doesn’t exist. They could have elected Marine Le Pen, an honorable and decent woman who obviously loves France and the French people. They chose instead to believe the lying propaganda of the news media and campaign slogans. Now the only choice they have is to accept servitude or rise in rebellion. I know which choice I hope they make.