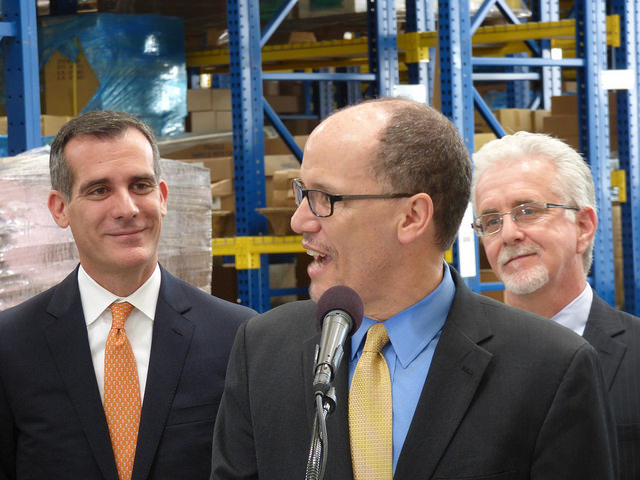 Two days ago, Tom Perez, head of the Democratic National Committee, gave the game away. Or would have, if conditions he identified actually existed. He complained about voters under the influence of “the pulpit on Sunday.”

The good news is that Tom Perez has at last put the ethical position of the Democratic Party on record. The bad news is that the “influence” of the pulpit on Sunday is not nearly as powerful as he fears.

Breitbart News Service has the best report of Tom Perez’ words, in full context. In speaking to a leftist “summit” in Washington, D.C., Perez repeated these words from a well-wisher in Wisconsin:

For most of the people I know, their principal sources of information are Fox News, their NRA newsletter and the pulpit on Sunday.

The rest of Perez’ remarks concern “building a bigger orchestra” and decrying the “orchestra” the Republicans have. (Maybe.)

That phrase pulpit on Sunday concerns us here. For one can draw two important lessons from it.

The DNC is the anti-pulpit

First, the Democratic Party stands against the Bible, and everything it teaches. If they did not, then the pulpit, on Sunday or any other day, would pose them no threat.

But in fact the Democratic Party embraces lying, cheating, and stealing—the classic “honor violations.” (Anyone who went to West Point, or to any school with a comparable honor system, knows what this means.) And behind stealing, they embrace envy. Worse yet, they embrace murder. Murder of the unborn goes without saying. Indeed the case of Roe v. Wade occupied all of Tom Perez’ attention with regard to pulpit influence.

Ignore everything else that this person has done and is doing. We have to focus on one issue in Roe versus Wade.

By “that person” he means President Donald J. Trump. Trump has always practiced a lifestyle of serial monogamy with occasional adultery. Every church-goer knows this. But he has embraced opposition to abortion almost as avidly as he embraced the Republic of Israel. On these and many other issues, Donald Trump is another King Cyrus. (Though he would scarcely qualify as another King Hezekiah or Josiah.)

Beyond the unborn come other issues where prominent Democrats have called for the deaths of their adult opponents. Thus the Democratic Party stands in violation of at least half the Ten Commandments and most of the rest. No wonder Tom Perez fears the pulpit so.

The pulpit is lazy

But for all that, the pulpit has fallen discomfitingly silent. Robert Peck discussed this last spring. More to the point, a far-ranging thought experiment would reveal just how lazy the pulpit now is.

If the pulpit had half the influence Tom Perez attributes to it, then:

We would have a President having the grit and determination of a Trump, but without his relationship baggage. The lack of pulpit influence goes beyond the Presidential election. It affects Congressional races, and the kinds of people who even present themselves to the Senate as judicial candidates.

This ideal President would have allied with him a Congress and Senate fully on the same page with him. Representative Nancy Pelosi, D-San Francisco, would not be serving today. A two-thirds-strong House of Representatives would have expelled her, Rep. Alcee Hastings (D-Fla.), then-Rep. Mike Espy (D-Miss.), then-Rep. Keith Ellison (D-Minn.), Rep. Debbie Wasserman-Schultz (D-Fla.), Rep. Elijah Cummings (D-Md.), and up to a third of the rest of the House. The charge: violation of their oath of office to:

support and defend the Constitution of the United States against all enemies, foreign and domestic, and [to] bear all true faith and allegiance to the same.

And this scenario even assumes Reps. Pelosi, Hastings, Espy, Ellison, Wasserman-Schultz, Cummings, and the rest would even win re-election!

Likewise, a two-thirds Senate would expel Senators Robert Menendez (D-N.J.), Cory Booker (D-N.J.), Charles M. Schumer (D-N.Y.), Kristen Gillibrand (D-N.Y.), Tim Kaine (D-Va.), Mark Warner (D-Va.), Amy Klobuchar (D-Minn.), Mazie Hirono (D-Hawaii), Kamela Harris (D-Calif.), Dianne Feinstein (D-Calif.), and many others who are unfit to sit in the Senate. The giant-economy-size charge against them all would be the same: infidelity to the Constitution. But the Senate would also expel Senator Menendez for his demonstrable pedophilic activities. He would then stand trial for the same. Again, all this assumes that any of these rogues would still sit in the Senate. Tim Kaine and Mark Warner certainly would not. Nor would “carpetbagger” Terry McAuliffe ever have been governor of Virginia, nor “scalawag” Ralph Northam be governor now.

Furthermore, Hillary Clinton would already be serving time for her financial and other chicanery. Donald Trump had his Citizen Kane moment in the second debate, if regular readers will recall. Nor would her trial have been any occasion for weeping or gnashing of teeth. It would instead be a solemn occasion. And most spectators would soberly reflect on lessons from the pulpit. Lessons like:

Pride goes before destruction, and a haughty spirit before a fall.

Roe v. Wade would have had a different outcome, back in 1973. But if one must allow for the church’s fall then, let us project an awakening today. The late Justice Antonin Scalia, before his death (murder?), asked: “Where is the moral outcry for life?” The pulpit should be raising that outcry now. It would raise it if it became the force-to-fear Tom Perez portrayed.

Every school would be a place of prayer. This correspondent attended the Governor Mifflin Cumru School in Berks County, Pennsylvania (1965-9). Teachers taught us old standbys like Come, Ye Thankful People, Come for Thanksgiving. They even staged the birth of Christ and all its attendant dramas. (This included the Imperial decree for the Great Taxation; cf. Luke 2:1-5.) Today, judges have disallowed such activities. A duly diligent pulpit would see judges not even granting standing to anyone to complain of such activities today.

But those same judges would never allow such practices as female genital mutilation. Even a secular outlet cries out in protest when a federal judge rules such activity permissible. Nor would any judge grant sanctuary to any mosque harboring or grooming a terrorist, or promoting terrorist acts.

Mass shootings in school or elsewhere would not occur. Pastors would embrace their role as personal counselors. They would as such intervene with picked-on kids now enduring torment and slowly building simmering motives for revenge. And the first Man in Black to try to prime, groom, train, arm, and back up such a marginal pupil in a hit against his school, would face instant arrest and imprisonment. Such “false flags” would never fly.

(Watch Alexa Miednik limn quote marks while speaking the word suspect. She tells of talking with suspect Nikolas Cruz with someone still firing shots in the background. She repeats that another shooter fired shots that day, and gives evidence to support her statement.)

A diligent pulpit would also advocate consistently for creation. Not just “creation” in the abstract but young earth creation. That the most violent event this world has ever known, took place 5300 years ago (give or take a hundred), none would dispute. Nor would anyone dare suggest that humans were no better than fish—or apes.

Deep space missions seeking life (strictly microbial) beyond the Earth, but still local to our Sun, would still take place. People would eagerly support such missions as further evidence to the scope of the Flood event.

Prospecting for nuclear fuel might improve as well. Today the model for finding radioactive ores seems to be: wave a Geiger counter around and see if it clicks louder than the background count. But a proper model for the seismic generation of radioactive elements and isotopes would better teach prospectors where to look.

More to the point, this would affect our foreign policy. The United States Ambassador to Israel would waste no time moving his office to the American consulate in Jerusalem. Of course he would, thus transforming a consulate into a true embassy.

But the United Nations would not exist much longer. American church-goers would recognize it at once as a precursor to the Wild Man from Among the Gentiles. (Cf. Revelation 13:1-10. The symbol for the Wild Man is a “beast from the sea.”)

In many ways, a pulpit as diligent as Tom Perez fears, would have created an America far different from today. Tom Perez would likely not even have his present job. Indeed the two parties jockeying for power today would not be Republicans and Democrats. They would instead be Christians and Libertarians. The debate would continue on a far higher plane. Furthermore, no one would dare suggest settling it on the level of physical violence.

The pulpit can still be the force-to-fear that Tom Perez conjured up. But to do that, a better class of seminaries must rise up and “dis-accredit” their rivals who water down Scripture. Pastors must ignore current interpretations of the Johnson Amendment and preach on political subjects anyway. A few test cases will finally exorcise the crude ghost of Senator Lyndon Baines Johnson (D-Texas) from American tax and other law.

Black Robed Regiment, take note! These are your marching orders. Tom Perez conjured up a diligent pulpit opposing his Party’s agenda. Let’s give it to him.

This message changes? When The Lord does and that just isn’t going to happen