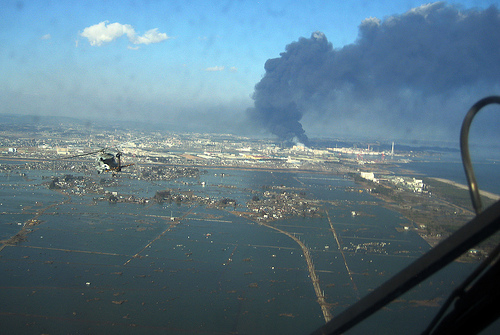 Let us clarify the terminology first. There is a difference between long and short-term changes. Long term changes we call Global Changes, including global cooling and global warming. Short-term trends we call weather.

Human and natural causes of weather

Also, there is a difference between human causes and natural ones like Sun spots, or other solar activity. It has been established by reliable neutral scientists that human activity cannot influence global trends; they depend solely on natural i. e. solar activity.

Weather is different. Human activity can have serious weather-related consequences like acid rain, cloud seeding, smog, etc. But natural causes can also create weather related events, like volcano eruptions, tornadoes, hurricanes, etc., some of which can also be related to solar activity.

In the following I shall show that the most important weather events are short-term adjustments made necessary by long-term changes solar activity, i. e. to neutralize the Sun’s global warming effect on the Earth.

I was working on a paper about the human body’s ability to heal it-self, when a friend sent me a link to a paper on global warming: http://www.petitionproject.org/gw_article/Review_Article_HTML.php

Do we need World Temperature Control?

The paper describes that three scientists at the Oregon Institute of Science and Medicine are circulating a petition first signed by Edward Teller, claiming that the global warming is caused by solar activity and discussed the possibility of world temperature control. It was signed by over thirty thousand scientists in the US.

It is a major study by experts, disputing current fears about Global Warming (GW), and urging repudiation of the so-called Kyoto protocol that calls for severe reduction in hydrocarbon-based energy production, with severe economic consequences. Over 30,000 scientists have signed the document summarizing the study that was submitted to the government for consideration.

These scientists are … convinced that the human-caused global warming hypothesis is without scientific validity and that government action on the basis of this hypothesis would unnecessarily and counterproductively damage both human prosperity and the natural environment of the Earth.

The argument of the paper is that the temperature on Earth depends mostly on solar activity, which is periodical. It also debunks the environmentalist argument that GW is caused by hydrocarbon use. They have collected data going back to 30,000 years and discovered several cycles. The last cooling period culminated in a “Little Ice Age” in the 1500’s, and the Earth is warming ever since. At the present time we are still somewhat below the 30,000-year average.

What grabbed my attention was the statement rather early in the study:

Glaciers are a lagging indicator of global warming or cooling

The most recent part of this warming period is reflected by shortening of world glaciers, as shown in Figure 2. Glaciers regularly lengthen and shorten in delayed correlation with cooling and warming trends. Shortening lags temperature by about 200 years, [so if the melting started around 2000], the current warming trend began in about 1800.

The study deals with this shortening as a danger sign, and in a separate chapter mentions several proposals, other than reduction of energy use, to reverse or at least slow down GW, along with the shrinking of the glaciers and the polar ice-cap.

What would artificial temperature control require?

“World temperature is controlled by natural phenomena. What steps could mankind take if solar activity or other effects began to shift the Earth toward temperatures too cold or too warm for optimum human life?

“First, it would be necessary to determine what temperature humans feel is optimum. It is unlikely that the chosen temperature would be exactly that which we have today. Second, we would be fortunate if natural forces were to make the Earth too warm rather than too cold because we can cool the Earth with relative ease. We have no means by which to warm it. Attempting to warm the Earth with addition of CO2 or to cool the Earth by restrictions of CO2 and hydrocarbon use would, however, be futile.

Inexpensively blocking the sun by means of particles in the upper atmosphere would be effective. S.S. Penner, A.M. Schneider, and E. M. Kennedy have proposed that the exhaust systems of commercial air liners could be tuned in such a way as to eject particulate sun-blocking material into the upper atmosphere. Later, Edward Teller similarly suggested that particles could be injected into the atmosphere in order to reduce solar heating and cool the Earth. Teller estimated a cost of between $500 million and $1 billion per year for between 1 ºC and 3 ºC of cooling. Both methods use particles so small that they would be invisible from the Earth.

“These methods would be effective and economical in blocking solar radiation and reducing atmospheric and surface temperatures. There are other similar proposals (99). World energy rationing, on the other hand, would not work.

The climate of the Earth is now benign. If temperatures become too warm, this can easily be corrected. If they become too cold, we have no means of response – except to maximize nuclear and hydro-carbon energy production and technological advance. This would help humanity adapt and might lead to new mitigation technology.

The Earth heals itself

Being a philosopher and believing in the body’s ability to heal itself, I saw a similar ability in the Earth’s setup. Therefore, in I suggests that melting ice-cap and hurricane like events, even wind, have sufficient balancing functions to stabilize the Earth’s temperature within acceptable range.

I believe such artificial control is not only potentially harmful, but is not necessary. It is uncertain, what nontoxic material could be used, and what happens to this shield: would it stay in space and shield the Earth forever, causing unnatural cooling when solar activity is reduced, or would fall back to the earth gradually, adding to the environmental problems?

The study makes it clear that the glaciers shorten or lengthen periodically, in reverse direction to the solar activity: they grow in the cold cycle, and shorten in the warm cycle.
My idea is that the glaciers and the ice cap at the poles serve an important natural temperature-stabilizing function. As the solar activity increases, the melting ice cap and the glaciers help to keep the oceans and the atmosphere from overheating, and vice versa. Thus, the current shortening of the glaciers is nature’s way of automatically protecting the Earth from temperature extremes. Hopefully, the present supply of ice will last until the solar activity decreases. But even then, according to the study, global warming (within certain limits, of course) would have beneficial effect on agriculture.

So, the current shortening of the glaciers only proves that the balancing system works as it should.

The other self-healing system is weather related. The energy the Sun sends to the earth are just about enough for the land areas, agriculture, forests and the animal world, but eventually would heat up the earth’s oceans and kill the marine life.

It is unfortunate that the Earth self-healing system brings tragic consequence. Weather and climate related events just in 2017 caused over $300 billion damage in the United States, but it makes it possible for life to survive on the Earth.

The efficient usefulness of the energy that reaches the Earth is far from one hundred percent. A small percentage is converted into electricity by solar panels, or may be used as heat source, or plants use it in photosynthesis, or humans use the warmth in various situations, but most of it is wasted.

How the earth wastes energy

No, the Earth does not have a huge energy wastebasket. But it has processes that turn the excess heat into waste.

Ocean waves can turn into powerful surf, and a fraction of these surfs is used by surfboarders, but most of it dies without being used. Their energy turns into entropy, low level energy that cannot be used any more. The same is with winds. Wind moves the air and it can power sailboats, wind mills, wind power generators and a few other devices, but again, most of their energy eventually turns into entropy. Hurricanes and typhoons are the world’s greatest entropy makers, keeping the Earth a habitable place, and keeping the oceans from overheating, making it possible for marine life to survive. At the same time humans, animals and vegetative life on land has sufficient energy to survive and thrive.

There is a related discovery that is good news to Florida and other coastal residents. It has been estimated that by 2100 the ocean will rise between 11 and 38 inches, a number that could mean that much of the U.S. east coast will be covered in water, National Geographic reported. On the other hand, it has been recently found that the ocean floors are sinking as the result of the weight of the increased amount of water, released by the melting ice caps.1 But the sinking ocean floors have to be balanced by rising dry lands. The sinking of the ocean floors, that makes up about 70% of the Earth’s surface, has to push up the remaining land mass with about twice the amount of the sinking. So, the relative rise of the water level will be much less, even if the current solar cycle continues, than expected.

Nature has a backup system: if one adjustment threatens mankind, the back-up system is triggered.

So, we can conclude that melting icecaps, hurricanes, tornadoes, cyclones and typhoons, in addition to the sinking ocean floor have an important role in preventing the Earth from overheating, as they transform the Sun’s energy into entropy. +

Dr. Sandor Balogh obtained a Ph. D. from NYU, and was a college professor, teaching social sciences and philosophy.

Bisexual Senator Loves the Constitution Yet Shuns the Author – Then On Whose Behalf is She Serving?

It would be fascinating to learn what Dr. Balogh’s proposed mechanism is that turns excess heat in the oceans into harmless entropy.