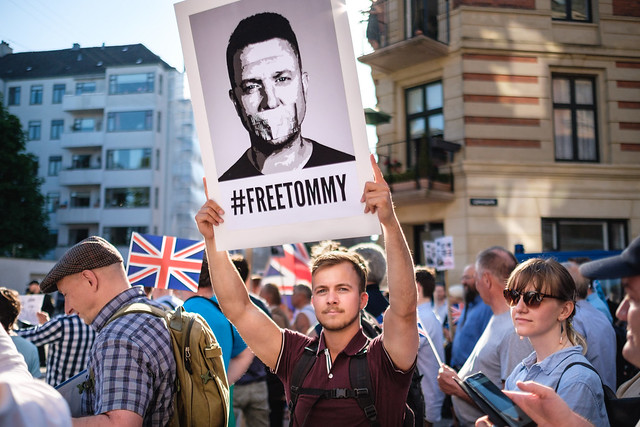 Tommy Robinson and his unjust conviction

The conviction of journalist Tommy Robinson is a humanitarian hoax that has destroyed free speech in England and threatens free speech worldwide. What does this have to do with America?

Tommy Robinson is a British journalist who has been reporting on Muslim rape gangs throughout England that have been raping little English school girls with impunity for decades. The savagery of their acts, and that British authorities are covering up this massive atrocity against the innocent, is extremely destabilizing to British society. Civilized people reject the protection of perpetrators at the expense of victims.

For civilized people, Tommy Robinson is the heroic whistleblower who exposed the horror of Muslim rape gangs and their unspeakable acts of barbarity in England. British society experiences enormous confusion and cognitive dissonance because British authorities protect Muslim rape gangs and embolden them by prohibiting the reporting of their heinous acts of savagery. Why is this happening?

Let’s sort this out by examining the reasons in numerical order.

Four reasons why the authorities sent Tommy Robinson to prison

Tolerism is defined by Howard Rotberg in his 2014 book, Tolerism: The Ideology Revealed, as “excessive leniency to opinions of certain groups, and excessive intolerance to the opinions of other groups.” Rotberg explains that the breakdown of Western society is a direct result of Leftist tolerists who insist that tolerance is more valuable than justice.

The once free Britain has reduced itself to a dhimmi nation by tolerating its sharia compliant Muslim population at the expense of its native Christian population. Make no mistake, there is an Islamic religious war being waged worldwide that seeks to eliminate competing religions and establish a global Islamic caliphate ruled by religious sharia law. Britain’s leaders are tolerists insisting that tolerating Muslim rape gangs in the name of cultural diversity is more important than justice for its victims. Tolerism is Britain’s fatally flawed political ideology providing victory to the Muslim Brotherhood, the multi-national organization that has declared Islamic religious war on the West.

Did you get the memo?

If we extend unlimited tolerance even to those who are intolerant, if we are not prepared to defend a tolerant society against the onslaught of the intolerant, then the tolerant will be destroyed, and tolerance with them. . . . We should therefore claim, in the name of tolerance, the right not to tolerate the intolerant.

The British court’s decision values tolerance over justice. Why would they do that?

In America the Leftist/Islamist alliance1 is trying to destabilize and overthrow duly elected populist President Donald Trump. POTUS is the consummate whistleblower in America, exposing the staggering malfeasance of the Washington swamp and the Leftists, Islamists, and globalists who live there.

Islamic tenets of misogyny, homophobia, antisemitism, pedophilia, gang raping non-Muslim little girls, female genital mutilation, and wife beating as long as these sharia-compliant Muslims are anti-American anti-Trumpers. Any anti-American anti-Trump Islamist is welcomed into the Leftist tribe because they are all warriors in the Culture War against America. America-first President Donald Trump is the existential enemy of the Culture War and the target of the Leftist/Islamist alliance.

In England, the Labor party is equivalent to the Leftist Democrat party in America. Both prefer globalism to national sovereignty. In England, the Labor/Islamist alliance is trying to destabilize England and create chaos to subvert the will of the people and stop the implementation of BREXIT.

So, what do President Trump and Tommy Robinson have in common? Tommy Robinson is the whistleblower in England and the existential enemy of the leftist Labor party that prefers tolerism to justice. Why?

Tommy Robinson and President Trump are claiming, in the name of tolerance, the right not to tolerate the intolerant.

What is the goal of tolerism in England and America? Why do Leftists in America and Labor in England ignore the obvious violations of the laws and norms in their Judeo-Christian countries and surrender their culture to the savagery and barbarism of Islamic sharia norms?

Tolerism is a paradox because tolerists selectively decide what to tolerate. Whistleblowing and truth telling about Muslim rape gangs is not tolerated – it is criminalized. So, a two-tier system of justice is established that prohibits anti-Muslim speech and protects anti-Christian and antisemitic speech. Why?

If you want to know the motive, look at the result. The effects of this egregious double standard is that anti-Christian burning of churches, and antisemitism including defacing synagogues is rampant and unpunished in England. If the British courts continue to protect sharia compliant Muslim perpetrators and their criminal acts at the expense of native Britains, social chaos will result. Remember, seismic social change requires social chaos.

Tommy Robinson and President Trump, each in his own way, is exposing the truth of tolerism and its global anti-American, anti-British attacks on our sovereignty and shared Judeo-Christian norms. Their separate efforts continue to unravel the ongoing deceitful multi-national efforts fomenting the social chaos necessary to impose a globalized New World Order.

Sir Karl Popper warned us about tolerism. George Orwell warned us that,

During times of universal deceit, telling the truth becomes a revolutionary act.

Every tyrannical regime the world has ever known begins its reign of terror by eliminating freedom of speech. Lenin did it, Trotsky did it, Hitler did it, now Leftists in England and in America are doing it by disingenuously relabeling free speech as hate speech. There is no freedom without freedom of speech which is why speech is universally the first freedom eliminated by despots.

The same tolerist Culture War being waged against America by the Leftist/Islamist alliance is attacking England. Leftism and Islamism have common cause to destroy the status quo even though their ultimate objectives will make them inevitable enemies. The Islamists are fighting for a global religious Islamic caliphate. The Leftists/Labor are fighting to destroy the national sovereignty and cultural identities of their respective countries in preparation for socialism in America, and a unified European State in England.

The irony, of course, is that members of the Leftist/Labor/Islamist alliance are all useful idiots for the globalist elite who finance and foment their lawlessness. The alliance members are just too arrogant to realize they are participating in their own destruction.

Seismic social change requires social chaos. The Leftist/Labor/Islamic alliances in the United States and England are providing the necessary social chaos for the globalists who fully intend to impose a New World Order – an internationalized world ruled by themselves under the corrupt auspices of the United Nations.2 There is no humanitarianism in the conviction of whistleblower Tommy Robinson. His conviction is part of the coordinated attack on free speech and a free and sovereign England imposed by the globalist elite using tolerism and the unholy Labor/Islamist alliance.

July 8, 2019 will be recorded as the day free speech died in Britain, the day Tommy Robinson was convicted for reporting the crime of Muslim rape gangs in England. The only law that Tommy Robinson broke was the Islamic supremacist sharia law forbidding criticism of Islam. Islamic sharia law does not consider the raping of little English school girls to be a crime – the prohibition is against criticizing and reporting it. England has reduced itself to a grotesque dhimmi nation willing to sacrifice its own little girls in a globalist power grab that requires social chaos.

The humanitarian hoax of tolerism that convicted Tommy Robinson must not be allowed to silence him permanently. Hopefully, populist President Donald Trump will grant Tommy Robinson humanitarian asylum in the United States where he can still expose the realities of an Islamicized England. Britain is, after all, the proverbial canary in the expansionist Islamist coal mine.

This article also appears here at Pundicity.com and at the author’s Website.

2 See this article here at CNAV.

The image “Tommy Robinson demonstration in Copenhagen, Denmark #freetommy” by Kristoffer Trolle is licensed under CC BY 2.0

Related Topics:first amendmentislamjudiciaryliberty
Up Next

The Humanitarian Hoax of the 2020 Democrat Party Platform: Killing America With Kindness – hoax 39

Z is for Zionism