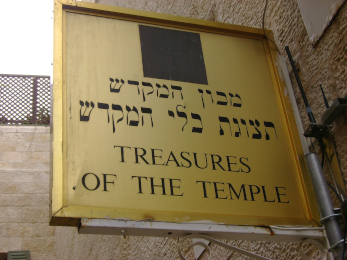 What did I do to help bring the Third Temple today? A question every Jew should ask themselves everyday, especially now that we’re entering The Nine Days, leading up to Tisha B’Av.

The Jews didn’t care enough about their Temple

The Yalkut Shimoni (a midrash) on the Book of First Samuel (106) teaches us an awesome lesson about the Churban/destruction and exile by the Romans, Rabbi Simeon Bar Menasya said,

Israel was only exiled after it rejected the following three things, Malchut Shamayim/the Kingdom of Heaven, Malchut Beit David/Kingship from the House of David, and the Beit HaMikdash/the Holy Temple.

So we learn from this, that the cause of the exile of the Jewish people, was because Jews took too lightly, Torah observance (God’s rule), we should have demanded a rightful Davidic descendant be appointed as king, once the Maccabees drove out the Syrian Greeks, and Jews didn’t care enough about the Holy Temple in Jerusalem.

Do the Jews yet care enough about the Temple?

A variant text in the Yalkut Shimoni explains from a different angle, why the Roman exile would be so long, as opposed to the limited seventy years of the Babylonian exile, after the destruction of the First Temple. Rabbi Simeon Bar Menasya predicted,

In the future the following three things will be despised by Israel, the Kingdom of Heaven, David’s kingdom [the Messiah], and the building of the [Third] Temple.

By the attitudes and behavior of most Jews today; the rampant secularization and assimilation; apathy about the Messianic concept and the Temple; Rabbi Simeon’s prediction seems to have come true.

If you (re)build the Temple, the end of exile will come!

But there is a third variant text, that gives the solution, how to end the exile. Rabbi Simeon Bar Menasya said,

Israel will not see a sign of the redemption until they [the Jews]repent and demand the following three things, the Kingdom of Heaven, David’s kingdom [the Messiah], and the building of the [Third] Temple.

To remedy the situation, end exile and bring redemption, Jews must be taught to understand the value of these three things, then begin to demand them, and work to achieve them.

Things an observant Jew can do today

There are many things to do everyday, like saying the section about Korbanot (Offerings), written in the prayer book, at the beginning of the Shacharit (morning) and Mincha (afternoon) prayers.

And saying Tikkun Chatzot, the midnight prayer, mourning, the exile of the Jewish people, the lack of honor paid to the God of Israel by the nations of the world, and the feeling of lack, that we no longer have the Beit HaMikdash.

Get anyone of a number of books about the Beit HaMikdash, available to buy these days (many with charts, diagrams, and pictures). Learn about the temple, the priesthood, and sacrificial system, their halachic details, and deeper mystical meanings.

Then if you’re in Israel, there’s Aliyah to Har HaBayit (going up to the Temple Mount within the known permitted areas), to show to the Arabs and the world, a Jewish presence there, and to God, that the Jewish people still care.

The Temple Institute and other Temple organizations

And there is also working with, or donating money to, any of a number of temple organizations and yeshivot (rabbinical colleges), working to construct vessels for future usage, learning all the pertinent laws of the temple, priesthood, and sacrificial system, promoting Jewish rights on the Temple Mount, and protecting the area of the Temple Mount from destruction of artifacts and Arabization, etc.

But by far the simplest thing to do, something everybody could do, is simply to ask yourself everyday, “What have I done for the Beit HaMikdash today?” Purpose: to increase your Temple Consciousness!

If you think that all these activities are a waste of time, that God will send the Messiah to build the Third Temple when He feels like it and nothing we do will help, think again!

There are many Torah sources that indicate, that its possible that the Beit HaMikdash or Holy Temple will be rebuilt before the onset of the Messianic Age.

R. Acha said: This teaches that the Holy Temple will be built before the throne of the house of David is established.

The Rambam, throughout his halachic masterpiece, the Mishneh Torah, constantly stresses that its a mitzvah for all time, for the Jewish people to build the Beit HaMikdash.

A prediction given almost three centuries ago

And, take a look at Rabbi Aryeh Leib ben Asher Gunzburg (c. 1695 – 1785), also known as the Shaagas Aryeh, a Lithuanian rabbi, and author of the Gevurot Ari, on Ta’anit 17. There it states, that certain Kohanim/priests are forbidden all year round to drink wine, from the Gemara Rosh HaShanah 11a, which cites a dispute between R. Eliezer and R. Yehoshua whether the redemption is going to happen in Nissan or Tishri.

The Gevurot Ari asks on the Gemara there, a question, it should be sufficient to ban drinking wine only for these two months, so why is it necessary to ban it for the entire year?

Build it any time of year

He answers on the basis of the Talmud Yerushalmi Maaser Sheni 5:2 that the Beit HaMikdash will be built before the Messiah from the House of David comes. He writes that according to this there is no fixed day for the building of the Beit HaMikdash – it could be built any day of the year. In contrast he explains that, R. Eliezer and R. Yehoshua discuss when the Messiah will come, which can only be in these months.

So, in fact, Rabbi Simeon was telling the Jewish people, to be redeemed, we need to implement these Mitzvot/policies that will re-build the ideal national structure in the Land of Israel, including building the Third Temple.

And as we all know, action follows thought. So, ask yourself everyday during these Nine Days (and the rest of the year, till the Holy Temple is rebuilt): What did I do to help bring the Third Temple today?

Now is the time to increase your Temple Consciousness!

This sign marks the entrance to the Temple Institute in the Old City of Jerusalem. Photo: CNAV

Out of Their Own Mouths: The Muslims are Telling You Their Plans–Infiltrate American Government (Video)

Is Our Current Congress the Worst Ever?