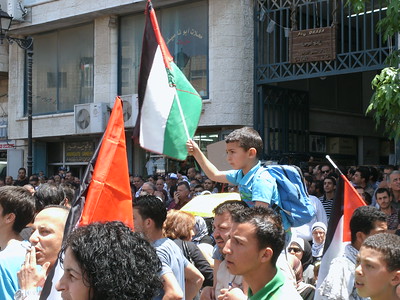 A Little Piece of Ground, by Elizabeth Laird, is a propagandist book available to all children in many libraries across the country. It concerns 12-year-old Karim who lives in Ramallah, historically an Arab Christian town. Ramallah is now a Palestinian city in central West Bank (Judea and Samaria), 10 km north of Jerusalem, Israel. He hears of nothing but violence and aspires to be the Liberator of Palestine.

The future liberator learns one side only

Karim resides with his parents and three siblings on the fifth floor of an apartment building. He hates living under the occupation. Yet no one has told him that the Israelis ceased its occupation three years before he was born. He knows that a Palestinian gunman shot two people in an Israeli café two weeks ago. As a consequence, the IDF demolished the next building. His building is on lockdown. An Israeli tank guards it to ensure that no one may enter or leave until further notice. The residents may not go to work or shop for food, and his school was leveled, the computers confiscated.

More recently, a Palestinian gunman opened fire in Jerusalem, gravely injuring five adults and three children. Three days later, the IDF announced new curfew hours for his area, allowing two hours for shopping and errands. That evolved into free daytime hours, but confinement continues from evening through dawn. Now his father may tend his store and inventory, his mother may take the baby to the doctor, and Karim and Joni meet a new friend, Hopper, with whom to play soccer – until dusk.

Inconveniences result from a bad decision

Karim’s father does not understand why the children must also be punished or why he can’t tend his store when others committed a crime. The Palestinians are not remorseful of the killings; Laird writes of no regrets. No family discussion takes place to correct the occupation narrative, to discredit the violence, or confirm the value of life. An effective way for the Israelis to discourage suicidal crimes is to ruin the homes of terrorists’ families. But Mahmoud Abbas reverses the effect with largesse and new homes to the martyr’s family. Generous humanitarian aid finances that largesse.

The children hear only of their inconveniences. Karim’s father curses the Israeli occupation that began when he was ten years old. But that actually resulted from his own parents’ pivotal decision. In 1948 the United Nations granted statehood to Israel on a little piece of ground. It amounts to 1/6th of one percent of Arab land. Jews have always lived there, but a succession of foreign powers ruled it. The Jews accepted the offer; the Arabs rejected it. Then five Arab armies set out – but failed – to destroy the new Israeli state.

A choice to stay and lose yet another war

Some of the Arabs welcomed becoming citizens of Israel. Karim’s ancestors chose to remain in Judea and Samaria, renamed West Bank under Jordan’s 19-year rule. After years of deadly attacks, the armies again mobilized for a full-scale war against Israel in 1967. Israel was victorious again and captured Sinai, Gaza and Judea and Samaria (West Bank), and became a reluctant occupier. As often as Israel offered a land trade for peace, the Arabs refused. They are waiting for their fail-safe victory over the Jews to fulfill Mohammed’s vision.

Since then, the Arabs renamed themselves Palestinians as a strategic tie to the land. They lived first under Arafat’s Palestinian government rule that began in 2000, followed by Abbas. Israel is not an occupying force. But its forces will control all who may endanger Israeli citizens, by checkpoints and any means necessary.

The future liberator goes down a (different) road…

During some free time, the family decides to visit their family during olive-picking season. On the way, they are redirected to a new road that has been cut through the main road, now prohibited to non-Israelis. Karim and the young readers know only that Palestinians are forbidden to use that road. The author does not explain this as a security measure. Palestinian youths have been hurling rocks and explosives at passing cars for years, causing accidents and death. The road is now safer, and the Palestinians may use this new route to their destination. Karim’s parents view this as another deliberate inconvenience because it increases the driving time.

Further down, they come to a roadblock. Palestinians had been killed and one “settler” wounded, the causes left unexplained. Adult men must leave the car and made to strip down to their underwear. Karim hates to see his father ridiculed, hates that the IDF are dominant over his people. Again, no one clarifies this as a response to a confrontation. Nor does anyone explain that the term “settler” exists to delegitimize the centuries of Jewish connection to the land.

Rock throwers ruin it for everyone

At his grandparents’ home, after dining and socializing, the visitors learn that the olives are no longer theirs to harvest. Palestinians had been hurling firebombs at Jews, and the IDF seized the little piece of ground on the hill and announced its zoning for a new Israeli development. The construction has begun. Authorities have apprehended and imprisoned the culprits, but these Arab residents are not peaceful or trustworthy. Later, Karim’s aunt proudly recounts that their cousins and neighbors continue to throw stones and Molotov cocktails at the soldiers. We are uncertain that Karim makes the connection of criminality and consequences.

Karim still dreams of being the Liberator of Palestine, of being the one to return the olive trees of four generations to his family. No one ever told him that this little piece of ground had belonged to the Jews through many centuries. Another announcement on TV states that a suicide bomber has killed eleven Israelis, four of them secondary-school students. The family deliberates the reprisals, while Karim considers the bomber’s heroism.

A voice of reason cannot compete with unreason

The author allows a voice of reason, as though to suggest that there are Palestinians who seek peace. As the lone voice of conscience and temperance, his uncle speaks privately to Karim. He says that had the Arabs won the war of 1967, they would be doing precisely what the Israelis are doing now. He appears to suggest that Karim consider that there is no morality to bombing Israelis, causing blindness, severe disabilities, death and misery to so many, and that it may be time to seek a peaceful solution to their existence.

But the opportunity of meaningful conversation is short-lived. They are called to dinner, where the group recounts the Arabs’ past victimization, the Turks, the English, now the Israelis. There is no mention of Hamas, the terrorist branch of the Egyptian Muslim Brotherhood. On the way home, the newscaster reports of tanks entering Bethlehem, and clashes between Arab youth and the IDF in Ramallah. This, then, is what surrounds Karim.

Back home with Hopper, his friend talks about his family’s expulsion in 1948. He does not say that they had expected to return victorious to Judea and Samaria after waging and losing their aggressive war against Israel. At home, Karim hears of the reprisals for suicide bombers in Bethlehem. Eight people die from tank shells; three houses fall to bulldozers. Ramallah is open, but with roadblocks. He has time to meet his friends. Now he passes a crowd looking at the bridge and at the bomb affixed to its underside. When he finds Hopper, he learns that Hopper attached a fake bomb. Now Hopper rejoices that the IDF has had to disassemble a sham. At Hopper’s house, he sees the grandfather’s key from the home they left behind in 1967, in Ramle, which is now in Israel. It endures as a constant reminder of injustice and victimhood.

A moment of play…

The three friends had their own little piece of ground near Hopper’s camp, which they have been working to clear for a soccer field. Hopper had found cans of red and green paint amid the rubble. Then on his own time he painted stones and positioned them to form the Palestinian flag. Joni and Karim marveled at his ingenuity. They had also camouflaged the cab of what was once a car with debris for a perfect hideout.

…turns into a trap for the would-be liberator

Today, as they play on their land, a voice suddenly blares, “Being outside is forbidden.” All but Karim could leave the field quickly. There are Israeli tanks on higher ground, and his only refuge is the car’s cab. With nothing but orange drinks to sustain him over two full days and nights, and the companionship of a mother cat and her kittens, he is well hidden. He suffers from a stray bullet in the back of his leg and bandages it with a piece of clothing. But he remains quiet and concealed until the curfew is lifted and his older brother, Jamal, comes looking for him. When the small Ramallah hospital staff learns of Karim’s experience and wound, they hail him as the conquering hero, and permit him to return home on crutches after two days.

Karim, home, hears the news. “Israeli tanks fired shells into a crowded building in Rafah last night, killing nine people and injuring …” His friend Joni comes to visit Karim, to tell him that Hopper was shot at last night, but only his arm was grazed, and he would be fine. Joni also came to say goodbye. He and his family, Christian Arabs, have no future here and are leaving for America.

The lesson for the vulnerable reader is that if you suffer nothing but a minor injury in your youth, you may go on to become a full-fledged terrorist.

But the more thoughtful reader should learn that there is nothing to counter the corrosive indoctrination they are receiving. This indoctrination comes in schools, in their homes, in their mosques, in the news reports. Ramallah and similar cities in Judea, Samaria, and Gaza, are breeding grounds for terrorism.

“Nakba Day demonstrations in Ramallah 2012” by Heinrich Böll Foundation Palestine & Jordan is licensed under CC BY 2.0

A Journal of the Plague Year – Free Speech and Dr. Judy Mikovits