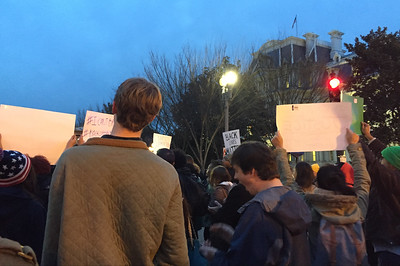 I’m color blind. I don’t look at the color of someone’s skin, but the content of their character, including their speech and actions. And let me tell you, Black Jew-hating Nazis are just as bad as White Jew-hating Nazis.

Before Black Lives Matter – the Nation of Islam

It started with Rev. Louis Farrakhan, calling Judaism a “gutter religion,”1 and Rev. Jeremiah Wright describing Israel as “state terrorism against the Palestinians.”

No actually, starting in 1961, the Nation of Islam, under Elijah Muhammad’s leadership and with Malcolm X’s help, the NOI developed ties with the Ku Klux Klan and the American Nazi Party.

See “The weird time Nazis made common cause with black nationalists”.

This policy continued under Farrakhan’s leadership of the Nation of Islam.

Farrakhan’s past statements are well known. For example:

Here the Jews don’t like Farrakhan and so they call me “Hitler.” Well that’s a good name. Hitler was a very great man. He wasn’t great for me as a Black man but he was a great German…

It seems, black and white separatists have common cause in hating Jews.

For a while, in the 1960s, the Black Panthers insisted they were not against Jews, but only against Zionism. Until 1970, when Connie Matthews, international coordinator of the Black Panther Party, declared in the BPP official organ, that Jewishness, Zionism and racism were identical, she claimed that most Jews involved in the Left were Zionists.

She accused the Jews involved in the Chicago 8 Conspiracy trial, to have been

…willing and did sacrifice Bobby Seale (a Black Panther), and his role in the conspiracy trial, to gain publicity.

Later she declared, “The one-eyed bandit from Tel Aviv (General) Moshe Dayan must be hunted down and killed.”

In fact, threatened attacks by black radicals on synagogues and the daily attacks on Jews in the streets of New York (similar to today), is what gave rise to Rabbi Meir Kahane’s Jewish Defense League in 1968.

Rap and Hip Hop singers have expressed anti-Semitic views since the beginning of the genre. Follower of Farrakhan and the Nation of Islam, Professor Griff, former member of the hip hop group Public Enemy, then serving as their “Minister of Information,” said in 1989 that, “Jews are responsible for the majority of the wickedness in the world.”

In 1990, Public Enemy issued the single “Welcome to the Terrordome,” which contains the lyrics:

Apologies made to whoever pleases

belittling the chosenness concept in Judaism and reinforcing the Christian accusation of deicide by the Jews.

Even during these tense and riotous times in America recently, following George Floyd’s seemingly unjust murder by a policeman, with many liberal Jews marching along, some are still stoking the flames. As with Ice Cube’s recent behavior, “Ice Cube Tweets Out Star of David With Apparent Occult Reference”.

When called out on his anti-Semitism he said,

What if I was just pro-Black? This is the truth brother. I didn’t lie on anyone. I didn’t say I was anti anybody.

Yet he has a long history of Jew-hatred. See:

And, whether on purpose or through “osmosis,” Judeopathy continues to infect much of black pop culture today. “Nicki Minaj Criticized for Using Nazi Symbolism”

Its not just radical black preachers and pop culture. Even more mainstream black activists and politicians have spouted anti-Jewish and anti-Israel rhetoric. Both Jesse Jackson and former US Ambassador to the UN, Andrew Young supported the PLO’s cause (independence through the murder of Jews). Don’t forget, Jackson’s “Hymietown” remark in 1984.

As late as 2006, Andrew Young in an interview with The Los Angeles Sentinel. When asked about Wal-Mart hurting independent businesses, he replied,

You see “those are the people” who have been overcharging us, and they sold out and moved to Florida. I think they’ve ripped off our communities enough. First it was Jews…

During the Crown Heights riots of 1991, when blacks attacked Jews, Yankel Rosenbaum was stabbed to death, and other Jews in the neighborhood were beaten up. Jewish stores were looted, and cars and homes (identified by their Mezuzah), were damaged.

On the third day of the riots, Rev. Al Sharpton and activist Sonny Carson led a march. The marchers proceeded through Crown Heights carrying anti-Semitic signs and burned an Israeli flag.

Sharpton and about 400 blacks marched through Crown Heights chanting:

And what did the recent rioters do? Attack Jews, synagogues, and Jewish property of course.

Anti-Semitic attacks occurred in other places throughout the US also.

America’s Kristallnacht has happened already. Do liberal Jews recognize it?

But this isn’t new for Black Lives Matter. They’ve expressed anti-Israel and anti-Semitic views since their beginning. In their 2016 Platform, they called Israel an “apartheid state,” and claimed it commits “genocide” against the Palestinians. See: “In platform, Black Lives Matter accuses Israel of ‘genocide,’ backs BDS”.

And, as if that wasn’t bad enough, Black Lives Matter and other black radicals are in bed with PalestiNazi Hamas. See:

Black Lives Matter has gone international. During a recent protest in Paris, some of the protesters chanted “dirty Jews” and “Jewish whores.” They also carried signs that read:

What does Jew-hatred and Israel have to do with a call for racial equality and protesting the murder of George Floyd?

It seems to me that Black Nazis take every opportunity to spit their venom at Jews and Israel.

But not all blacks are anti-Semitic. ADL surveys conducted between 2007 and 2013 found that the vast majority of African-Americans when questioned, rejected anti-Semitism. For example, in their 2009 study, the ADL reported that 28% of blacks surveyed displayed antisemitic views, while a 72% majority did not. But, they consistently found that negative attitudes towards Jews were stronger among African-Americans than among the general population of America at large.

More recent polls such as “African Americans Have Mixed Opinions and Often No Opinions on Israel”, that LifeWay Research conducted in 2019, also show about 30% of blacks hold anti-Semitic and anti-Israel views.

But, when asked about Louis Farrakhan claiming that Jews have a “tremendous” influence in the US government and as a result “black people in this country will never be free until they are free of that kind of control,” 41% of blacks agreed.

Still it means the majority of blacks do not hold such views.

Also, many black conservatives have been criticizing Black Lives Matter, condemned the rioting, insisting on personal responsibility instead of the victim mentality, and the “systemic racism” narrative.

People such as Candace Owens, a former Democrat Party activist, “Candace Owens: I do not support George Floyd”. She points out that Jews don’t riot when another Jew is arrested or incarcerated. Neither do other ethnic groups. Then she goes on to blame blacks themselves, pointing out that black on black murder is much more severe than what’s done by whites.

Al Sharpton, addressing a group of Reform Jewish leaders in 2019, shared with the audience, the rebuke he received after the 1991 riots by Martin Luther King Jr.’s widow, Coretta Scott King. She was known for her closeness to the Jewish community.

“One of the things she said to me, she said, ‘Al, the purpose of our movement has never been to just get civil rights for us, it’s to protect and stand for civil and human rights for everyone,’” he recalled.

“She said that ‘sometimes you are tempted to speak to the applause of the crowd rather than the heights of the cause, and you will say cheap things to get cheap applause rather than do higher things to raise the nation higher.’” Implying that his anti-Semitic vitriol during the riots was wrong.

It seems that Black Lives Matter is following in the violent confrontational path of the Nation of Islam, the Black Panthers, and other radicals, rather than the racially reconciliatory Civil Rights Movement of Martin Luther King Jr. and those like-minded.

Now we read that:

1 Mr. Farrakhan denied, and continues to this day to deny, having said that. But the archives of The New York Times contradict him. See Shipp E.R., “Tape Contradicts Disavowal of ‘Gutter Religion’ Attack,” The New York Times, 29 June 1984. <https://www.nytimes.com/1984/06/29/us/tape-contradicts-disavowalof-gutter-religion-attack.html>

Deranged Bill Gates Accuses Those Who Refuse to Take His Vaccines As Those That Are Endangering The Lives of Others – Did He Forget That He Is The One That Wants to Depopulate The World? His Wife Now Takes the Stage…

A country unwilling to defend itself

Democracy or divine aristocracy for Israel? | Conservative News and Views

[…] There have been reports of shakedowns on local businesses, extorting money from shopkeepers in CHAZ/CHOP and the abuse of its own “citizens.” And, during the Black Lives Matter-led “George Floyd” protests and riots (although protesting supposedly for equality, democracy, and against police abuse); there have been many reports of specifically anti-Semitic epithets, graffiti, violence, and destruction being done. See my last article. […]