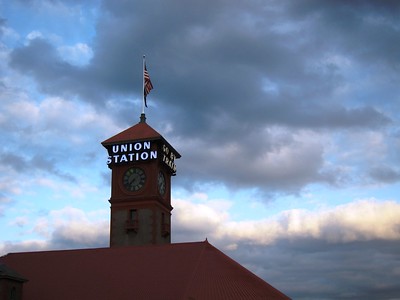 Donald Trump is no stranger to controversy, and never has been. So when he sent Federal Protective Services agents into Portland, Oregon to arrest people who were threatening the Federal Building and other federal properties in that city, naturally the left and the mainstream media started howling with outrage. But now some on the right have started questioning Trump’s judgment in this crackdown. Herewith a perspective on the events and their actual meaning. And a challenge to the President’s detractors: what would any of you do instead?

Forget the Left; they don’t want law or order anyway

CNAV gives up on the left. Of course they will criticize. Some will criticize everything President Trump does, merely because President Trump does it. But let us understand clearly the motives of other leftists. We deal here with a new attempt at a Communist revolution. But these modern revolutionists aren’t merely attacking heads-of-state and anyone who passes for a nobility. They attack, and threaten to attack, anyone who owns much more than the shirt on his back and the toothbrush in his hand.

That’s right. Murder, robbery and mayhem are the order of the day in Portland, Oregon. Example: members of “Antifa” assault and batter a journalist. Nor is this purely a racialist revolution: white leftists are joining in. And black police officers don’t appreciate it, either.

The left is one thing, but when the right opposes the crackdown, too…

So of course the left will oppose this crackdown. They are the enemies of law and order. They are either committing the murder, robbery and mayhem or sympathizing with those who do. Therefore one need assign no value to anything they say on the matter.

But when Judge Andrew P. Napolitano and Senator Rand Paul (R-Ky.) oppose sending federal LEAs, their arguments deserve serious consideration. Particularly when the President proposes expanding his crackdown to Chicago and other cities with Democratic mayors.

The mayor of Chicago has already refused such aid, this even after 15 people took bullets at a funeral.

This is the same Lori Lightfoot who put her (light) foot into her mouth.

Likewise, Mayor Bill De Blasio of New York City threatens to sue the President if he sends agents to the Big Apple. Well, then! He then could explain defunding the New York Police Department and disbanding its plainclothes anti-crime unit. With the result that murder, robbery and mayhem are the order of the day in New York City, too. Let him explain also why local black community leaders want that anti-crime unit back.

An example of the violence that now threatens…

So never mind the arguments of mayors guilty of dereliction of duty, if not selective enforcement of the law and indifference to the plight of their own residents. Like this unidentified baby that someone clearly was abusing.

True enough, we don’t know whether the one pressing a knee to the baby’s neck is a racialist revolutionary, or just another abusive boyfriend of a mother who then had custody of the boy. (She’s lost custody, and the boyfriend is under arrest on an unrelated probation violation.)

We don’t even know whether the mother was present (she says she wasn’t). Or, if she was not present, who was holding that baby’s arms behind his back. But we can readily infer that this will be the order of the day in more jurisdictions if the Antifa and BLM revolutionaries achieve their goals.

That alone ought to convince anyone of good heart that some crackdown is necessary. For if it does not happen, one of two other things will:

Opposition to the crackdown from people of good heart

Let us, therefore, examine the arguments that three opponents of the Trump crackdown put forward.

I understand the rationale; the leaders of the city don’t seem to be doing anything. Just look at how CHOP turned out in Seattle. But I feel like … this is what the people in these cities voted for. This is who the people in these cities keep voting for. Let them deal with the consequences of their ignorance and/or apathy and the ballot box WITHOUT setting a precedent of sending in troops.

Understand: “troops” have no part in this crackdown. The Posse Comitatus Act of 1873 forbids regular Army troops to engage in civilian law enforcement. But Senator Tom Cotton (R-Ark.) did propose something along this line. The uproar over the publication of his piece in and by The New York Times resulted in the recent resignation of Bari Weiss, the ombudswoman of the New York Times editorial page.

What happened in Portland over the weekend, it was not only unlawful and unconstitutional, it’s just plain wrong. Sending armed, untrained police into the streets wearing fatigues without the knowledge or consent of the local police actually caused more violence.

Disputable, on two grounds. First, those forces went in to protect federal buildings. Second, the demonstrators were and are anything but peaceful.

We cannot give up liberty for security. Local law enforcement can and should be handling these situations in our cities. But there is no place for federal troops or unidentified federal agents rounding people up at will.

Here is the identification of the federal force: Customs and Border Protection. They wear patches giving numerical identifiers, this to prevent the “doxing” of their homes and families.

So let us see where we sit.

Wrong choice of uniform for the crackdown

One obvious ground to criticize the President’s crackdown exists. He should have had the Federal Protective Services personnel appear in police uniform, not combat fatigues. The fatigues created confusion and prompted the charge of sending in troops. In fact the Federal Protective Services are the “police” that personnel in any federal installation call if anything threatens that installation. They guard everything from a city Federal Building to the smallest Social Security office. As your editor knows first-hand, from providing contract IT services to a Social Security office.

But equally wrong grounds to oppose the crackdown

As above, Judge Napolitano made statements one can reasonably dispute. CNAV stands by sources, to which it has linked above, to assert that the violence already existed. Remember: murder, robbery and mayhem are the order of the day. To oversimplify the narrative and ignore such facts, ill befits a former State superior court judge.

Steve Crowder has a somewhat more just point. The people in Portland, Chicago, New York City, and other cities did vote for such a state of affairs. True enough: the majority so voted. What does Mr. Crowder have to say to those who voted against it? And who now find themselves the targets of a murderous revolutionary movement, and usually without arms to resist it?

Shall people just move out?

CNAV must infer that the best thing Mr. Crowder suggests these outvoted people do, is move out. Which likely means walking away from a mortgage (with all that entails about Experian, Transunion, and Equifax stamping “Deadbeat” on their credit records), and indeed leaving behind all their possessions. Just throw a bug-out backpack into your car and go. And run a gauntlet of blood-curdling screamers who are trying to stop your car, drag you out, and kill you.

And once one does get out of Portland, where next does one go? Perhaps into the rural areas of Oregon, to join up with a militia. And the movement to join rural Oregon to Idaho.

Big reason for the crackdown – local law enforcement stands down

Which brings us to Senator Paul’s objection. “Local law enforcement can and should be handling these situations in our cities,” he says. But that’s the gag, Senator. Local law enforcement is under orders to stand down and not handle anything. As Steve Crowder admits. So again, Senator, which is it to be? Warlords declaring Autonomous Zones and going on a rampage of rage against all property owners? Or armed militias forming up, walking in, and shooting it out?

Waiting for an election?

And one last thing: Steve Crowder calls on voters to remember at the ballot box. But the following lines from Actor Burt Lancaster, as Gen. James Matoon Scott USAF, in Seven Days in May tell us what good that will likely do, namely none:

I think in [the time to come] we won’t even have an electorate, let alone an election. I think we’ll be sitting in our own rubble. And we can put on their tombstones, “They died for…”

The lunatics are running the asylum

Defunding the police may have negative consequences