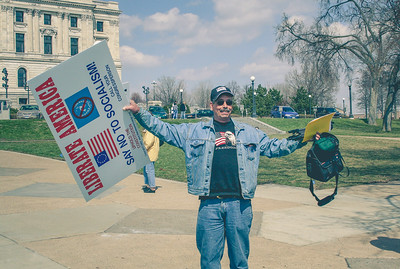 The U.S. Presidential Election of 2020 will definitely give Americans a choice between freedom (and specifically capitalism) and socialism. The socialism advocates know this. So they have begun a disinformation and “gaslight”1 campaign about what socialism is – and is not. Therefore, to make an informed decision, the American people need some definitions. And these must be precise definitions, because socialism is in fact a matter of degree.

Socialism and its appeal

Regular readers of CNAV will recall that CNAV treated the appeal of socialism more than two and one-half years ago:

Then, CNAV offered these definitions of capitalism, socialism, and communism:

Furthermore, CNAV treated the appeal of socialism, and to what it appeals. Socialism appeals to:

To gaslight a person means to invalidate systematically that person’s concept of self, external events, or both.2 Which is what the advocates of socialism must do. They may not openly advocate for their vision in America today, not without confusing Americans’ understanding of the concept. When the then guardians of the Star Trek franchise decided to advocate for socialism openly, even they dared not mention it by name. Instead they called it “The New Economy.”

What is socialism? Even its advocates don’t seem to agree!

Today’s advocates confuse the issue two ways. Protest yet another usurpation of private industry by government and they will say,

But you don’t know what socialism is! Providing this one thing is not socialism. It is caring for your fellow man, something you might learn will help you.

Oh, really? Ask a Dane or a Swede and he will remind you sharply that their countries’ governments do not own heavy industries. Therefore, they do not consider their countries socialistic. (Neither do the Norwegians.) And they certainly will not welcome a comparison to a failed state like Venezuela! Nor a slowly dying or at least stagnant one like Cuba.

An adequate definition must define degrees

Two and a half years ago, CNAV said socialism may have degrees. The present gaslight campaign clearly shows the need to say much more. In short, not merely to say that socialism has degrees but to say what those degrees represent.

To craft an adequate definition, CNAV turns to the Society of Automotive Engineers. They now define automotive autonomy by degrees, or levels, to which a car or truck takes control away from a human driver. At the highest level, a car wouldn’t even have manual or pedal controls. At the lowest, the car provides a minimum of assistance, like conventional automatic speed control.

Herewith a definition of the degrees, not only of socialism but of its competing ideologies of capitalism (full personal autonomy and responsibility) and communism (total government authority and responsibility over every aspect of a person’s life).

Anarcho-capitalism means literally that everything is private. It holds the individual, alone or in association with others who join together with vountary consent, responsible not only for economic well-being but also for physical security. Government does not exist. First response comes from whoever sees an emergency situation, or from some group who planned a response ahead of time. Fifty years ago, CNAV would guess first response would be in the hands of the Boy and Girl Scouts.

The minimum level of government that Ayn Rand, founder of Objectivism, proposed, limits itself to:

The lowest level of extra government: custom and tradition

Level 0: the government provides, in addition to the above, these “customary and traditional” government services:

(In ancient Rome, responsibility for public streets rested with the commissioners of streets, buildings, inspections, weights and measures—the aediles. But highways typically came under the families of their first builders. Highways became an exclusively governmental institution with the arrival of the Emperorship. With rare exception these have fallen within government purlieu ever since.)

The first two levels of socialism

Level 1 socialism or “social democracy”: government providing all the above, plus:

The last levels: the individual loses all autonomy and responsibility

Level 3 social democracy: a government that provides everything in Level 2 above but also starts, not just to buy “minimum” products but make them directly. Enter things like:

Level 4 socialism: the government is the sole provider of a set of goods and services considered essential. It grudgingly allows private crafts for the production of toys and other “fripperies.” Taxes are high—ninety percent if you’re not a government industry employee.

Level 5: this is total communism. In it, to quote Actor Patrick Stewart in Star Trek: First Contact, “money does not exist.”The government holds all things in common and provides a daily ration of what it decides you should have.

Levels of socialism on Earth today

So where do America and other countries stand on this stepladder? Today every country on Earth has more than a “minimal government.” Even ancient Rome, with its grain dole, stood at Level 1. America stood at Level 0 for most of its history. But she started to climb (or more properly, descend) the ladder with the Presidency of Theodore Roosevelt. America moved deeper into Level 1 with the nationalization of rail passenger service – the National Rail Passenger Corporation, or “AmTrak”. With the Presidency of Barack H. Obama, America moved formally into Level 2.

The United Kingdom stood at Level 3 until Prime Minister (later Baroness) Margaret Thatcher took the country down at least to 2. Sweden, Norway, Denmark and Finland are at Level 2. Venezuela and Cuba are at 4; mainland China is perhaps at 3.

No country has ever gone all the way to Level 5 socialism – in which “money does not exist.” The Soviet Union tried that, then abandoned the attempt. Hence the ruble.

The actual desires of the advocates of socialism

When Senator Sanders pleads about “looking at countries like Denmark and Sweden,” he is, in fact, lying. We know he’s lying because he honeymooned in the Soviet Union and extolled what he saw as its virtues upon his return. Don’t let his lavish lifestyle, with the mansions and so on, fool you. He would claim that those things are his perquisites of good, unselfish service.

And he would have a precedent! Ancient Gallic tribes like the Aedui held their lands in common—but ranking chieftains “caretook” certain holdings. Rome and most of her allied cities likewise had public lands (ager publicus). But Roman Senators routinely “rented” these lands long-term (the latifundiae).

This election, as CNAV mentioned, presents a stark choice. A vote for the Democratic Party today, at any level, is a vote for socialism.

2 Patrick Hamilton made the concept famous with his original stage play Gaslight. This play formed the basis of two motion pictures, the second of which (1944) became more memorable.

3 In The Moon is a Harsh Mistress (Robert A. Heinlein), a character answers a critic who calls him an ingrate for not wanting to support certain government services. Among them: “Medical insurance – we have that but apparently not what you mean by it. On Luna, if a man wants insurance, he goes to a bookie and works out a bet. You can hedge anything, for a price.” True enough, a conventional insurance company does “make book” on risk. That does not in and of itself make it illegal. Nor does it imply that government and only government ought to share either risk or expense.

“‘Liberate America'” by Tony Webster is licensed under CC BY 2.0

Related Topics:economyelectionpresidential election
Up Next

Who will be President if Joe Biden wins? | Conservative News and Views