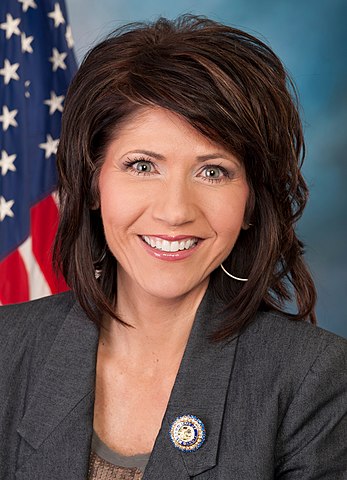 “So I never issued a shelter-in-place, I never closed a business. I didn’t even define an essential business … Because I don’t have the authority to do that.” Governor Kristi Noem

One governor declares that governors lack the authority

Nine Governors of states within our union have refused to play games with the likes of the federal government, Bill Gates and his little henchman Anthony Fauci concerning the fraud that they have perpetuated on the people of this country.

And the one Governor that seems to stand out more then others is South Dakota’s Kristi Noem.

I know that when you have a leader overstep their authority in a time of crisis, that’s really when you lose this country. And I didn’t want to be guilty of doing that.

South Dakota Gov. Kristi Noem has declined to lock down her state amid the coronavirus pandemic. [This] even as other government leaders around the nation issued restrictions that significantly throttled the U.S. economy.

She said that she listened both to health officials and to individuals who informed her about the bounds of her gubernatorial authorities.

“I know that when you have a leader overstep their authority in a time of crisis. That’s really when you lose this country. And I didn’t want to be guilty of doing that,” the Republican Gov. explained during an interview on “The Pod’s Honest Truth” podcast. “So I never issued a shelter-in-place, I never closed a business. I didn’t even define an essential business … because I don’t have the authority to do that.”

Other governors think not of authority or its limits, but of fear

The reporter went on to describe certain conference calls in which she took part, with other State governors and the President.

“And during those calls she found that fear was driving people’ actions.

“What I am saying though is that what I heard on those conference calls was fear,” she said. “I was shocked and amazed by how fear controlled people and how emotional that they were. And to me it indicated that in this country we’ve lost faith and the steadfast promise of God’s faithfulness in our life every day has real consequences.”

She said that Americans must defend their religious liberty, which has [come under attack] amid the pandemic.

“They are attacking our religious freedoms. And so we need to use every tool that we have to make sure that we still have the ability to practice our faith and to gather as we see fit,” the governor said. “And we have directly seen in many of these states where they have allowed other gatherings yet restricted those who want to go to church and worship together.”

So I ask that if the people in this country see that this is completely un-Constitutional and that the federal government along with some of the states Governors and Mayors are attacking businesses and the church, then why is it that people are falling into line with this perpetuated fraud (Psalm 78:9, 94:20, Ephesians 4:14).

The people must rise up and impeach every single one of these tyrants for transgressing the US Constitution. And then indict each and everyone of them. (Article 2 section 4; Article 1 section 3 clause 7.)

Anthony Fauci: The Most Despised Con-man On The Planet Is Being Hailed By Time Magazine As One Of The Most Influential…See How This Works

[…] medical fearmongers to begin with. He should have followed the example of Kristi Noem (R-S.D.). She declared that she lacked the authority so to […]