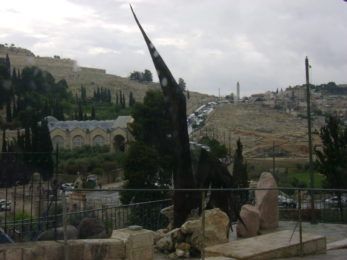 In her book, The Shepherd’s Granddaughter, Anne Laurel Carter drops her young readers into the middle of a land without its history, a situation without context, and a story without perspective. But she intends her message to influence innocent students. It is a tutorial in subterfuge, a tale woven on an invisible loom, where the circumstances are unseen, the actions undefined, and the slander insidious. This is my seventh children’s book review and it has left me reeling.

Context dropping from the start

We meet Amani at age 6, eager to be a shepherd like her grandfather, Seedo. His two sons (her father and uncle) and his grandson (Amani’s brother) apparently have other interests and Amani loves being with the sheep. However, there is no resemblance to Johanna Spyri’s joyous tale, Heidi, as this author has a political mission. We immediately learn that Amani’s people have lived “under the Mediterranean sun” for a thousand years. So this land, by default, should be theirs. If that were the case, might that same rule also apply to the Jews who lived in Poland for more than a thousand years? Does mere residency grant consequential ownership?

No, that is not the case. In Ambassador Yoram Ettinger’s “Palestinian claim of continuity,” he quotes British cartographer and Dean of Westminster Abbey, Arthur Penrhyn Stanley. Who observed in 1856, “for miles and miles there was no appearance of life or habitation” in Sinai and Palestine. The labor migration into the British Mandate was notably Egyptian. But it also included Syrian, Yemenite, Persian, Afghan, Hindu, Bedouin, Bosnian, and more groups – at least 25 different nationalities. The point: the majority of residents in Judea, Samaria and pre-1967 Israel were recent migrants.

The necessary context of the Six-Day War

Grandfather explains that the Israeli “occupation” dispossessed the mountain wolves. More likely, the wolves fled the din of the systematic shelling into Israel by Syria, Lebanon, Egypt, Iraq and Jordan, and the all-out “Six-Day War,” when Israel made a vital pre-emptive strike that resulted in its re-occupation of the West Bank (Judea, Samaria), Sinai Peninsula, Gaza Strip, Old City of Jerusalem, and the Golan Heights. And since then, the Arabs, now self-proclaimed Palestinians, have never ceased their terrorist raids.

As they navigate the grazing areas, Amani sees terraced olive trees and areas where Israelis destroyed entire groves. Again, the author allows us to believe that Israelis wantonly cause destruction, and withholds the truth. Property demolition is a method Israel has used in these territories that came under its control because of winning the Six-day War. The procedure is considered a form of deterrence or collective punishment. It forces the terrorist to consider the effects of his actions on his family. When Amani observes the occupation, checkpoints, security zones and helmeted soldiers, Seedo justifies, “We’ll never have peace through violence. They don’t trust us.” His statement, both prophetic and instructive, remains unexplained. But it implies that he knows the terrorists who are responsible for the local damage and the Israeli backlash, including the eventual demolition of their property.

During family conversations, they speak of Israelis building new highways and new settlements (neighborhoods) throughout Palestine (Judea, Samaria). And heading their way. Amani’s uncle Ammo, angry that Palestinians live like refugees, wants only to fight with weapons. As they watch TV, they learn of battles on city streets, riots, protesters decrying the new highways, people crying, blood-stained sidewalks, a suicide bombing in Israel, 11 young people killed in two explosions. Israeli soldiers block the old road to disallow passage through the eastern gate.

Ammo wants his people to live in houses on Palestinian land. The author, Carter, does not explain that this land is disputed territory. As such it falls under the purview of UN Resolution 242. Which calls on Israel to withdraw from territories captured if and when its neighbors agree to live in peace, and not as long as the terrorism continues. Palestinians have refused all proposals of peace. They use their UN funding for weaponry, terror tunnels and payments to mothers of martyrs instead of building infrastructure and establishing a country.

They speak of armed Jewish neighbors chasing Palestinian farmers from their orchards, burning down houses, suggesting that they are the aggressors, attacking without reason. These are neighbors who are retaliating against the source of terrorist attacks. But until the terrorists are apprehended, it is Israel’s policy to respond with disciplinary action. Which means temporarily shutting down power, imposing a provisional curfew, and positioning tanks to enforce house arrest. Which also inflicts a financial hardship for those who cannot go to work. These activities are not explained to the young readers. Neither are they told why Amani’s father, uncle, and brother are periodically arrested and released. Amani’s brother Omar gives her a book, Al Naqba (The Catastrophe), referring to the (self-)evacuation of 600,000 Palestinians in 1948. Carter offers no history, no context, no comment.

The damning context of the Massacre That Never Was

As bulldozers approach the north valley, Omar, cries out,

They want our land, our water, they want to drive us out. A man has the right to defend himself on his own land.

Their mother, Mama, talks about the past and the “massacre” in her village when the Israel Defense Forces attacked. Omar claims the right of defense, that Israel wants Palestinian water. In truth Israel supplies Palestinians with water. In fact, Israel has doubled the amount that was stipulated in the Israeli-Palestinian Interim Agreement (9/28/95, signed in Washington) to combat the desert water crisis. The Palestinian Authority pays Israel $3 million per year for their water. Which constitutes less than 10 percent of the water they consume.

Mama’s tale of the massacre is Carter’s revival of the most infamous Massacre that Never Was. It occurred in Jenin, April 2002, when 16 Palestinian terror bombings killed 102 Israeli civilians. The BBC (British Broadcasting Corporation) reported first 3,000, then 520, Palestinians killed. Then they added unchallenged quotes and false allegations that at least half-hourly sensational reports would repeat. When finally Doctors without Borders went in, and encountered the undeniable stench, they reported that the body count was unearthed corpses from adjacent cemeteries. The BBC was fully responsible for all the libelous coverage, falsehoods, accusations of “war crimes against humanity.” Sir Quentin Thomas called it

a straightforward lie unwittingly, but very effectively, served by the BBC, that caused terrible damage and pain.

Carter, knowingly or otherwise, refrains from clarifying that the horrors never took place. Knowing only what Mama says, the young readers will conclude that Israel is worthy of loathing. Further, Mama’s village was not “confiscated,” but “recaptured” by the invaded country.

To exacerbate the already damaging narrative, Carter adds two gratuitous Jewish characters to the story. One is a rabbi who joins the demonstrating Palestinian blockade that chants, “This is our land,” as they seek to stop the Caterpillar equipment from preparing the peak for paving. Certainly, the Jews have their share of collaborators or leftists. But the novelist’s inclusion is psychologically coercive, implying that this individual represents a large percentage of Israelis.

The second is Jonathan, a teenage boy about Amani’s age, whose “settler” father shot one of Amani’s sheep. He is sympathetic to Amani and rejects his father’s actions and the conflict. He says,

My father says a real Jew defends the Holy Land. I don’t know what a real Jew is anymore. My grandparents saw so many Jews die in the camps. They believed in a homeland where Jews would be safe, but I can’t believe they meant this. The settlement destroyed your life.

The author’s message is that the traumatic injustice suffered by the Jewish generation of the Holocaust has goaded them into visiting something similar on a defenseless people. However, there is no historic precedent to prove that Jews are a vindictive people, but quite the opposite.

The context of the real legal residents

The Jews are the indigenous people and legal residents on the land. Yet Carter disparages the defensive actions of the Israelis while remaining non-judgmental about the terrorism. Which, in essence, is a continuation of the Islamic jihad that has spread throughout the world over 14 centuries. The novelist has used two Jewish conspiratorial voices to support the Palestinian narrative.

Carter evidently has no concern whatsoever with context, perspective, history and the consequent dissemination of falsehoods. The danger is that the young and undiscerning will accept her story at face value. Only those who understand the substory of this tale will realize that Amani’s father, uncle, and brother are terrorists. And because of them, Amani and her family have lost everything.

South Dakota Governor: I Don’t Have The Authority To Lockdown The State, They Are Attacking Our Religious Freedoms – What Is It That The People Don’t See Here?

When will we return to normal?