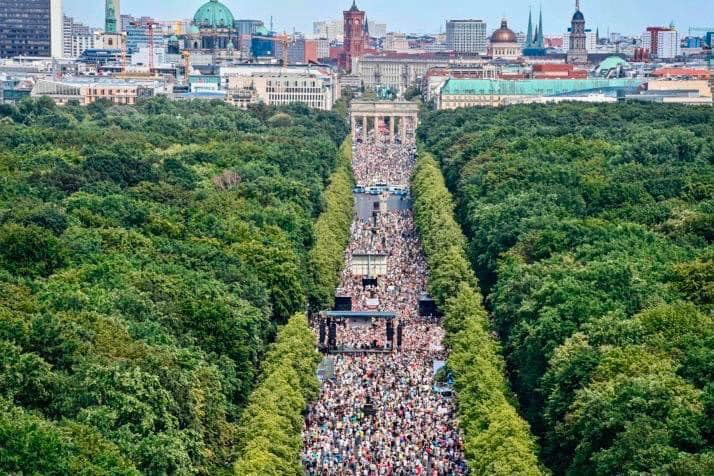 “And You Haven’t Heard A Peep – Pictures Are Worth A Thousand Words!”

Why is the mainstream media so set on propping up that which does not exist, creating divisions and wars among the people, or just plainly withholding news of worthy topics such as the unity among the people who are, in fact, taking a stand against the very tyrants that they should be exposing?

France, United Kingdom, Israel, Australia, etc. are countries that are taking a stand against the tyrannies in their perspective governments when it comes to the plandemic and its illegal business shut-downs and mask mandates (Isaiah 28:18).

Let me just remind many that believe the lies of the MSM that across this country, I get to see and share with you the pictures of the people that are unified rather than divided (Psalm 33:12).

These useful idiots, known as journalists, do not want the people to unify. And that is precisely why they are busy dividing (John 10:10).

You see, divided we fall and united we stand. But do remember, that if we ever forget we’re one nation under God, we will be one nation gone under! (Psalm 9:17.)

This is how the CIA-controlled media works. They want to single you out and make you feel as if no one else feels the same way that you may. Their worst nightmare is that the people in this country will awake in such a fashion. So, take courage and help make that nightmare their reality (James 2:14-26).

The pictures below are Germany, and Germany alone. Also, consider the other countries doing the same lest you feel isolated and alone in your stand against tyranny. (Psalm 27:2)

Apparently, people in other countries are catching on. (Jeremiah 6:16.) I praise God for every one of them that are awaking to that very fact (Acts 10:35), in case that you were under the delusion that everyone was just going along with it, which they are not (Matthew 7:13-14)!

This article appears here with permission from Sons of Liberty Media.

Furthermore, your editor, a former physician, adds this. While none can doubt that SARS-CoV-2 exists, neither have mainstream physicians established that it is as virulent as they say. Obviously the people in these pictures did not “drop like flies” after the taking of these pictures. This plus the Swedish experience gives the lie to the recommendations from public health authorities in America this year. Nor did any scene like these play out anywhere, in any language. (Apologies to Stephen King.)

Vaccine not sought! Rebellion in the wind - Conservative News and Views