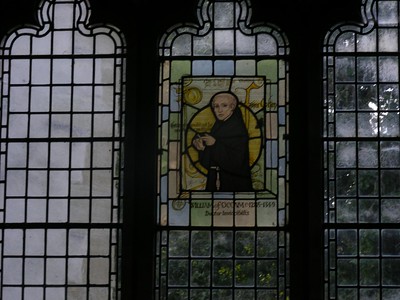 Recently a creation advocate, whom I will not name, refused “honorable mention” at the Creation Science Hall of Fame. He gave this reason for so acting: God, he says, never uses “natural processes” to do the great things He does. This applies as much to the Global Flood (Genesis chh. 6-8) as to Creation itself (Genesis 1:1-2:4a). Everything in either event, must be a miracle. This makes it as good a time as any to discuss, and propose, a statement on economy of miracles. I call it Brown’s Razor, after Walter T. Brown, originator of the Hydroplate Theory of the Global Flood. In fact, Brown and I have discussed economy of miracles often, in conversation and correspondence.

Occam’s Razor states: “one does not multiply guesses without sufficient reason.” In paraphrase: the simplest explanation that fits all observations is the preferable one.

Likewise, Brown’s Razor states: one does not invoke miracles without sufficient and highly specific chapter-and-verse attestation in Scripture. Again, in paraphrase: the simplest explanation that fits Scriptural testimony is the preferable one.

What does Brown’s Razor imply? For one thing, the Global Flood does not have to be a miracle. Indeed I propose that the real miracle in the Flood story was Noah receiving, 120 years in advance:

In addition, Scripture attests that God sent a favorable wind at a critical moment to protect that ship—Noah’s Ark—from swamping.

But Scripture does not attest that the Flood and everything we associate with it were miracles.

Why does Brown’s Razor matter?

To apply miracles to everything is to risk putting God to the test. And we know that God frowns on such behavior? How? Read the story of the Devil tempting Jesus to jump from the pinnacle of the Temple.

Let us apply Brown’s Razor together with another principle: the Method of Exclusion. To do this, let us assume that:

Then how could Noah and his family and their living land-animal specimens have breathed?!? That would require another miracle, becausethe Flood would have had to rise to cover Mount Everest! Which, as everyone knows, rises as high as an airliner flies. You need self-contained high-altitude breathing apparatus, in the form of tanked oxygen, before you dare climb that mountain!

Yet Scripture says the Flood waters covered the highest land at the time to a depth of “fifteen cubits,” or about twenty-two-and-a-half feet. Or deeper, because we do not know how long an antediluvian cubit was. (The depth that Scripture quotes, is probably the draft of the Ark. That’s how deep below the water the lowest part of a ship reaches.)

One could add miracle to miracle—and make people wonder why God does not work such plethoras of miracles today. Or one could apply Brown’s Razor, and the physical evidence. Both of which suggest that the mountain chains we know today, reared up when the continental plates:

Astronomy and mineralogy present worse problems for the assumption of miracles. If we maintain that everything in the Flood was a miracle, then we must explain certain features of our modern world that do not conform, by any reasonable standard whatsoever, to the evaluation of the world of Genesis chapter 1 as “very good.” (Hebrew mo’ed tov, which, when translated justly, means absolutely excellent.) Who can genuinely consider any of the following to be part of a “very good” creation?

Comets, in particular, have a dire reputation. “Evil stars!” the ancients called them, or to use the literal Greek name, disastroi—disasters. In the centuries following the Flood, comets fell back to Earth often. They didn’t necessarily create catastrophic impacts, but they did create frightening celestial displays. As late as 1066, comets retained their reputation as portents of doom. Anglo-Saxon nobles noted the passage of Comet 1P/Halley, one day before the Battle of Hastings. As Matilda, queen consort to William the Conqueror, embroidered in her famous Tapestry.

Beyond a frightening display is a more frightening prospect of impact. Great craters persist today, including the great meteor crater of Arizona and (some say) the Gulf of Mexico. Earth’s Moon, for its part, suffered a tremendous bombardment that put the Moon into tidal lock with Earth.

Radioactivity obviously makes people and living things sick! Nor are the heavy isotopes totally without harm. Proteins that incorporate heavy atoms of certain elements cannot fold or “conform” properly. This fact, at least as much as radiocarbon and that background radiation that was unknown before the Flood, explains why the lifespan of mankind declined ninety percent in eleven generations after the Flood. And continued to decline during the Age of the Patriarchs.

Did any miracles occur?

Yes. Miracles come in two varieties. When something happens against very long odds, that is a miracle. And when something happens in violation of the physical laws of the universe, that certainly is a miracle. King Hezekiah of Judah knew this, when he asked that God roll back the shadow on a sundial by ten steps. So did Judge Gideon when he asked that God present him a dry fleece with surrounding ground wet with dew.

We can comfortably consider the creation of the Earth, the Moon, the Sun, and life itself a set of miracles. In fact, in addition to the three bodies named above, the following bodies are likely to be part of the original miraculous Creation:

Everything else in the Solar system, added together, would weigh about four percent as much as Earth. Not too difficult, then, to assume that these other objects form when Earth shed four percent of its mass in the most violent event it has known since its birth, i.e., the Flood.

So Brown’s Razor does not preclude miracles entirely. It merely asserts that one should reserve miracles for things one cannot explain without them. Not, that is, without violating the original Occam’s Razor.

Those who object most strenuously to Brown’s Razor or anything like it, express the fear that it makes God Unnecessary. This cannot be true. To “make God Unnecessary” requires a very long time span—four point six billion years for the Solar system as a whole.

If the Solar system were that old, the Mavericks of the Solar System would mostly have cleaned themselves out. This applies to the comets. Of course, Jan Oort tried to explain why the comets didn’t dim to invisibility long ago. He proposed a “cloud” of comets surrounding the Sun at an incredible distance. This “Oort cloud” fails for an obvious reason: we’ve never seen it. Indeed, neither Voyager 1 nor 2 ran into it, as they surely would have by now.

Life on Earth presents two problems: origin and a limit on the life span of species. Individual life spans aren’t the problem. Geneticists today speak of genetic entropy, a concept they borrow from thermodynamics. Simply put, after enough generations, offspring have so many genetic diseases that they cannot survive even to make another generation. Humankind should have gone extinct long ago.

They can’t explain it

These and other observations argue for a young Earth and a young Solar system. Which is why secular scientists deny them or try ever more complex ways to explain them apart from miracles. Ironically, they propose a series of miracles of the game-winning kind to explain the beginning of life. They then propose that life will go on with only the stars to limit it.

But the inability of secular observers to explain what they observe, doesn’t excuse us to decline to explain these things properly. And it certainly does not require that we abandon the attempt! Brown’s Razor, or an economy of miracles, can keep creation apologists honest.

“William of Occam, Ockham” by sludgegulper is licensed under CC BY-SA 2.0

Related Topics:creationismmiraclesscientific theory
Up Next

Pope Francis makes it up as he goes

Radioactive debate on the Hydroplate Theory