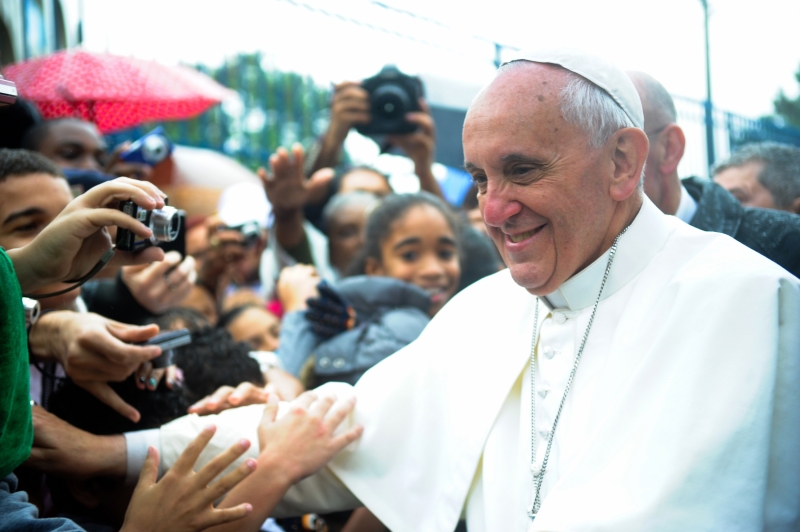 No one should rely on Pope Francis for anything. Bad enough that he essentially promotes the myth that Jesus was a Socialist.1 Now he actually says the Earth might suffer a second Global Flood. But half of his warning contradicts the other half.

What exactly did Pope Francis say?

Thomas D. Williams, PhD, tells us what the Pope said at Breitbart.com. Dr. Williams is reviewing the latest book by Pope Francis, Of Vices and Virtues, that will release tomorrow. In this review, Dr. Williams cites this excerpt that appears in Corriere della Sera.

A direct quote (from a translation by Yandex.com)

The wrath of God is against injustice, against Satan. It is the revolt against the evil, not the one that comes from the human weakness, but the evil of Satanic inspiration: the corruption generated by Satan, behind which are the individual men, individual women, and entire societies. The wrath of God to bring justice, “to clean.”

The flood is the result of the wrath of God, the the Bible says. It is a figure of the wrath of God, Who according to the Bible has seen too many bad things and decides to erase humanity. The biblical [flood], according to experts, is a mythical tale. (Now I hope that someone is not supporting that the Pope has said that the Bible is a myth!) But the myth is a form of knowledge. The flood is a historical account, say the archaeologists, because they have found traces of a flood in their excavations.

A large deluge, perhaps because of a rise in the temperature, and the melting of the glaciers, is what is going to happen now if we continue on the same road. God has unleashed his anger, but He saw right, He took it and saved him.

The story of Noah shows that the wrath of God is also saving.

How Pope Francis contradicts himself

First, Francis disbelieves the Biblical Flood account as a myth. Lay aside his parenthetical statement; perhaps he means, “The Bible is a Real Book that contains myths.” More to the point, the pontiff then acknowledges that something like a flood affected large portions of the world. And then he says we are about to see something like that, affecting the whole Earth.

How can the Flood be both myth and history at one and the same time?

The same attribute cannot at the same time belong and not belong to the same subject in the same respect.

What he means to say

Pope Francis in essence repeats the doom-and-gloom alarm from “climate activists” everywhere, that:

One presumes that the “water world” would have a few islands left to it, that once bore names like Everest, McKinley, and maybe Kilimanjaro.

Biblical and scientific flaws in the Pope Francis argument

The pontiff makes two glaring errors in his pronouncement. First he ignores Scripture. God said He would never again “curse the ground” and flood it all out. A total secularist can afford to ignore this part of Scripture. After all, such a person doesn’t believe in it, so he doesn’t argue from it. But the College of Cardinals selected the pope in the confidence that he accepted Scripture. Such a glaring omission breaks that understanding.

Second, Pope Francis clearly does not understand how violent an event the Flood was. The Flood event made many changes on this Earth that go far to explain modern disbelief in it. Among other changes, the Flood event:

Previous treatments of the Flood event

CNAV refers readers to this three–part series on the Hydroplate Theory of the Global Flood.

While these articles are not all-inclusive, they do give the most comprehensive treatment of the theory aside from Walt Brown’s own book explaining it.

Walt Brown, originator of the Hydroplate Theory, established that the Flood did happen as Shem, Ham and Japheth describe it. Their contribution to Genesis (vv. 6:9b-10:1a) contain the Log of the Cruise of Noah’s Ark. That Log describes the most violent event in the history of our world. It is the only event worthy of the name cataclysm, which is what the Greeks called it.

Apart from God saying He would never make this happen again, we can confidently assure ourselves that it could not. The subcrustal ocean, three quarters of a mile deep all the way around the Earth, drained almost totally. It doubled the volume of the oceans of Earth, and yet those waters still receded. And only such an event could cover all the land again, or even the civilized footprint. Those advising Pope Francis forgot to tell him that ice contracts as it melts. (And water expands as it freezes. Otherwise, ice could never float, and the sinking ice would smother the ocean floor.) More to the point, the Earth is cooling, not warming. The Texas Deep Freeze ought to convince people of that.

All the above should make Pope Francis an unreliable witness for any objective observer. Having discounted a key event in the Bible, he cannot then cite it to give warning for the present. He begs people not to say he declared the Bible a myth, then ignores a key statement by God Himself. More to the point, he suggests that puny human beings could wreak a havoc on their Earth as bad as, or worse than, the Flood. Which, then, is the worse kind of arrogance? To attribute to humankind a power beyond Divine power? Or to assert that any human government ought to have the kind of authority Pope Francis wants it to have? The United Nations, perhaps? Promoting this kind of program?

The College of Cardinals made a mistake eight years ago. With his latest pronouncement, Pope Francis has shown just how bad a mistake they made.

1 Any reference to the Bible, or God the Father, Son, or Holy Spirit rates capitalization. The capitalization reflects Who or What They are, without regard to what any human being thinks They are. CNAV here follows the style of The Amplified Bible.

Brown’s Razor and economy of miracles