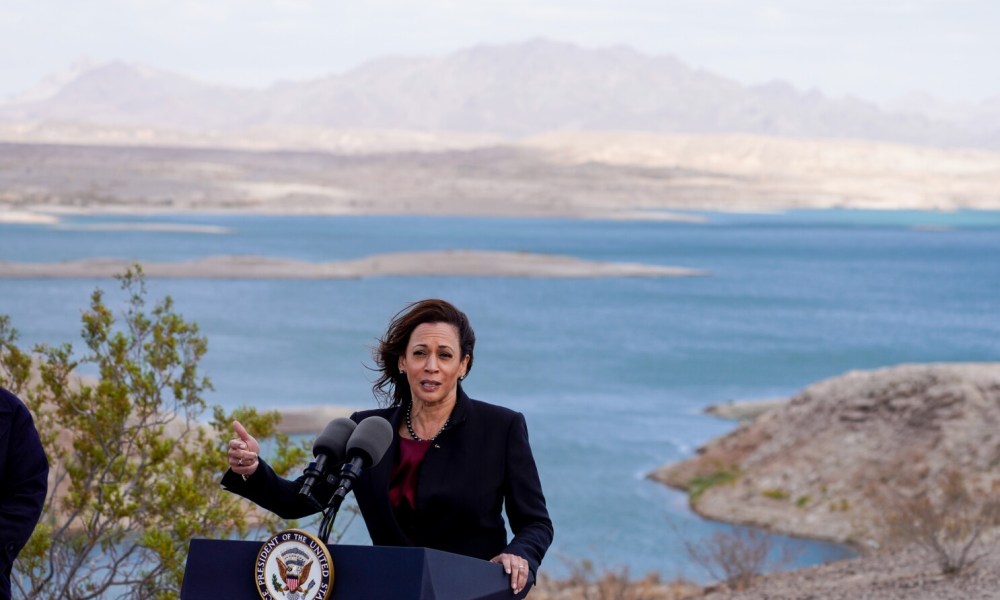 Amid worsening drought in the West that threatens the region’s water and food supplies, Vice President Kamala Harris went to Lake Mead on Monday to pitch the Biden administration’s infrastructure and climate change plans, saying they would create jobs and respond to climate change.

“It is critical that we as a nation understand that we have within our hands, within our possession, the ability to actually change the course of where we’re headed,” Harris said, standing in front of a lectern with Lake Mead — and its precipitously low water levels — as a backdrop. “Let’s get these bills passed.” The Nevada reservoir, which provides water to 25 million people in California, Arizona, Nevada and Mexico, has seen its levels decline every year since 2000 and now is at it lowest level since its creation more than 86 years ago. The reservoir has dropped 140 feet in the last 20 years.

In September, Reclamation released projections showing an even worse outlook for the river. Officials said Harris will discuss the separate $1 trillion public works infrastructure deal that passed the Senate months ago and is awaiting House approval. That package contains roughly $8 billion for Western water projects.

Some of the ways the plan would combat the effects of drought include investments in desalination technology that makes sea water usable, fortifying rural water infrastructure and building more wastewater recycling technology to help stretch existing supplies [Los Angeles].