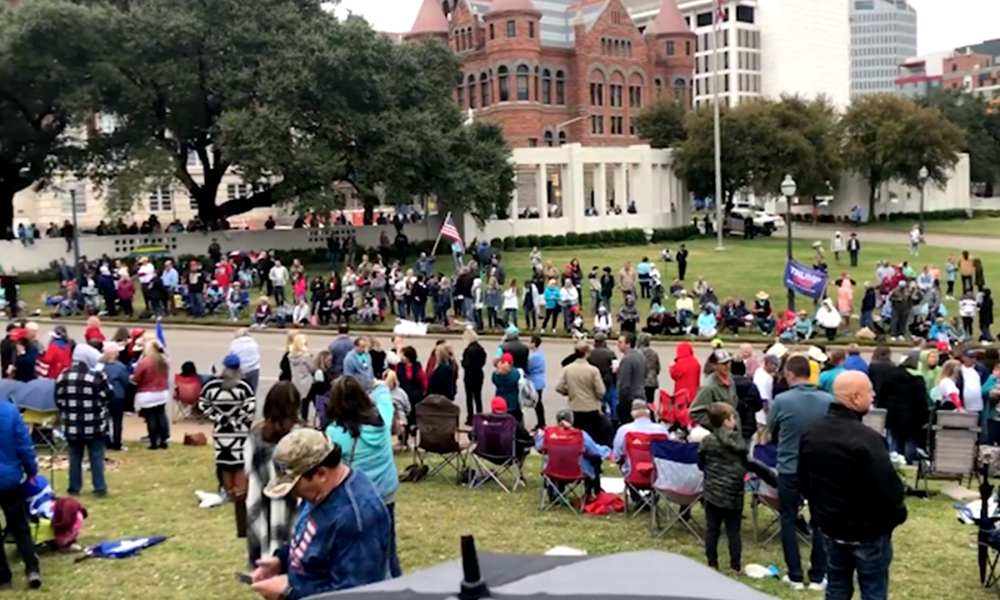 On Monday night, a wave of alleged QAnon supporters gathered in Dallas expecting the return of John F. Kennedy Jr., who they thought might assist in the reinstatement of former President Trump. A second group of supporters appeared the following day.

Newsweek reported that a post from a popular QAnon account said that after Trump’s reinstatement as president, he would step aside to give the office to Kennedy Jr. Additionally, the post alleged that Michael Flynn, former national security adviser, would be appointed as JFK Jr.’s vice president, which would make Trump the “King of Kings.”

Of the crowd members, who all gathered at Dealey Plaza where President John F. Kennedy was assassinated in 1963, some were wearing t-shirts that said “Trump: JFK Jr. 2024.”

JFK Jr. was killed along with his wife and sister-in-law after their plane crashed off Martha’s Vineyard into the Atlantic Ocean. Despite his death, he has been a relatively popular figure in the QAnon movement for several years. Some members believed he would return on July 4, 2019 to as Trump’s vice president.

Micki Larson-Olson, a QAnon supporter, said she believes both JFK Jr. and his father are alive and will return to help ring in the Trump-JFK Jr. administration. “We’ll figure that something happened in the plan that made it not safe to do it,” she said. “If it doesn’t go down how I believe it will, that’s OK. We’ll figure it just wasn’t the right time.”

Jared Hold, Atlantic Council’s Digital Forensic Research Lab resident fellow, said that he was surprised to see the relatively large turnout of QAnon supporters. “Frankly I’m kind of shocked at how many people turned out for this,” he commented. “This wasn’t a widespread belief, even among QAnon followers.” Hold also added that it was concerning to see the extent of people able to “mobilize in person” over a conspiracy theory.