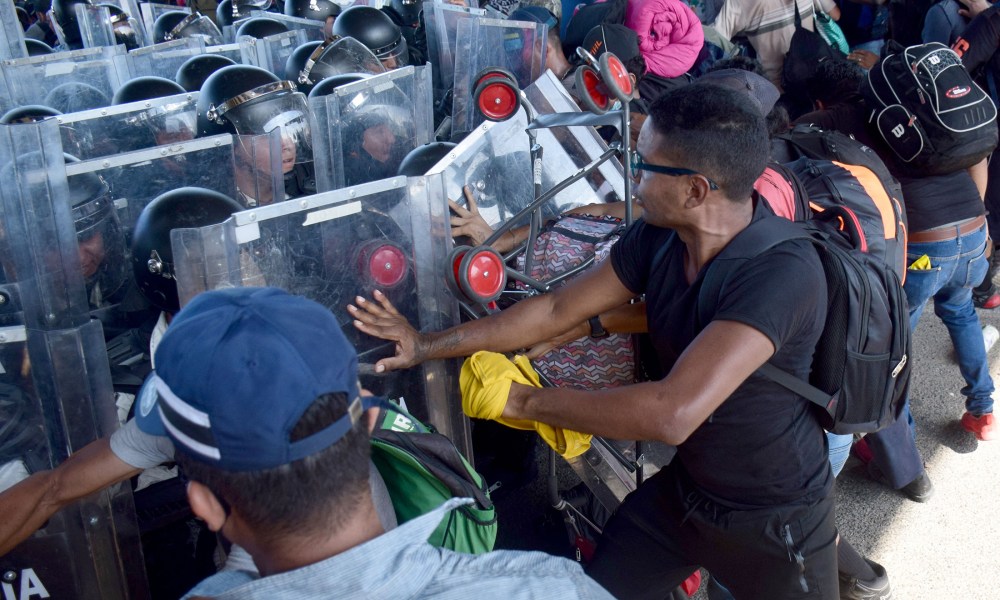 A caravan of migrants mostly from Central America came into contact with the Mexican National Guard, which turned violent.

The approximately 3,000 member caravan has been slowly moving north, starting in Tapachula, Chiapas, Mexico, with members of the group coming from even further south. Now, they are making their way through Mexico.

After taking a two-day break during the weekend, caused by fatigue and illness among the crowd, the caravan resumed its journey on Monday. The group had yet to make it out of Mexico’s southern state of Chiapas when the incident took place. Mexico sent its National Guard to prevent the group from passing.

Videos show the officers wearing helmets and riot shields, and being pushed back by the crowd, where many are hitting the guards with sticks or throwing rocks. Luis Garcia, a caravan organizer, told Reuters via phone call, “There are two injured migrants, they were badly beaten. The officers tried to surround them with their shields.” The scuffle took place near to where a Cuban migrant was fatally shot by police last Sunday.

Both the National Guard and members of the caravan seem to have different stories. According to some of the migrants, the violence was sparked by the “brutal” detentions of women and children in the caravan by the Guard. The National Guard said this hadn’t happened and that “at no time responded to the aggression” and “rejects all forms of violence.” In addition, they said five officers sustained “considerable” injuries during the encounter.

Towards the end of October, reports emerged that many in the caravan were rejecting offers from Mexican officials to accept visas in exchange for discontinuing their trek towards the U.S. One leader within the caravan, Irieno Mujica, said most rejected the offer because they would be required to go to government shelters and be moved to other states. He also said that many also have little trust in immigration officials because they have been lied to in the past, and faced arrest or deportation.