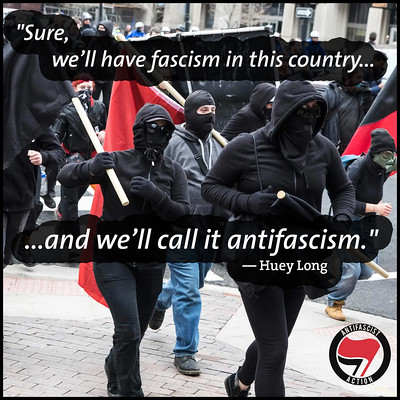 An example of confronting Antifa

This last Friday, I preached in Tennessee where we were asked to be a part of OSA National Event “Foundations of Freedom” (Luke 24:47).

The following day, we were then asked to go to downtown Nashville to protest abortion at the capitol which we obliged (Matthew 3:2).

Upon arrival, there were those that were dressed up like a bunch of terrorists trying to do their best to intimidate everyone that they could.

I guess that they called themselves ANTIFA, the Anti-Fascist Action to which I am also opposed, but like so many of these groups, we know that it is not what they are truly standing against but just the opposite (Isaiah 5:20).

They deceive themselves first and try to deceive you second

As a matter of fact, we know that many of these groups ANTIFA and Black Lives Matter groups are state sponsored or rather they are paid provocateurs. They are the modern-day brown shirts sent in to create domestic insurrection and or browbeat their opposition. Well, friends, I was going to have none of it.

These are uneducated people playing into the hands of their oppressors and being used, in the end, to their own demise where they want to take everyone with them (Proverbs 14:12).

You are not to be afraid of these advocates of crime. You are to confront them and to give them the knowledge of their sin both before God and our laws in hopes that they will repent (Psalm 94:16).

The short video below will show you the encounter, as well as the opportunity given unto me by the Lord in setting the record straight (Mark 1:3)!

“We’ll Call It Antifascism — Huey Long” by The Graphic Details is licensed under CC BY 2.0

What does standing with Taiwan really mean?