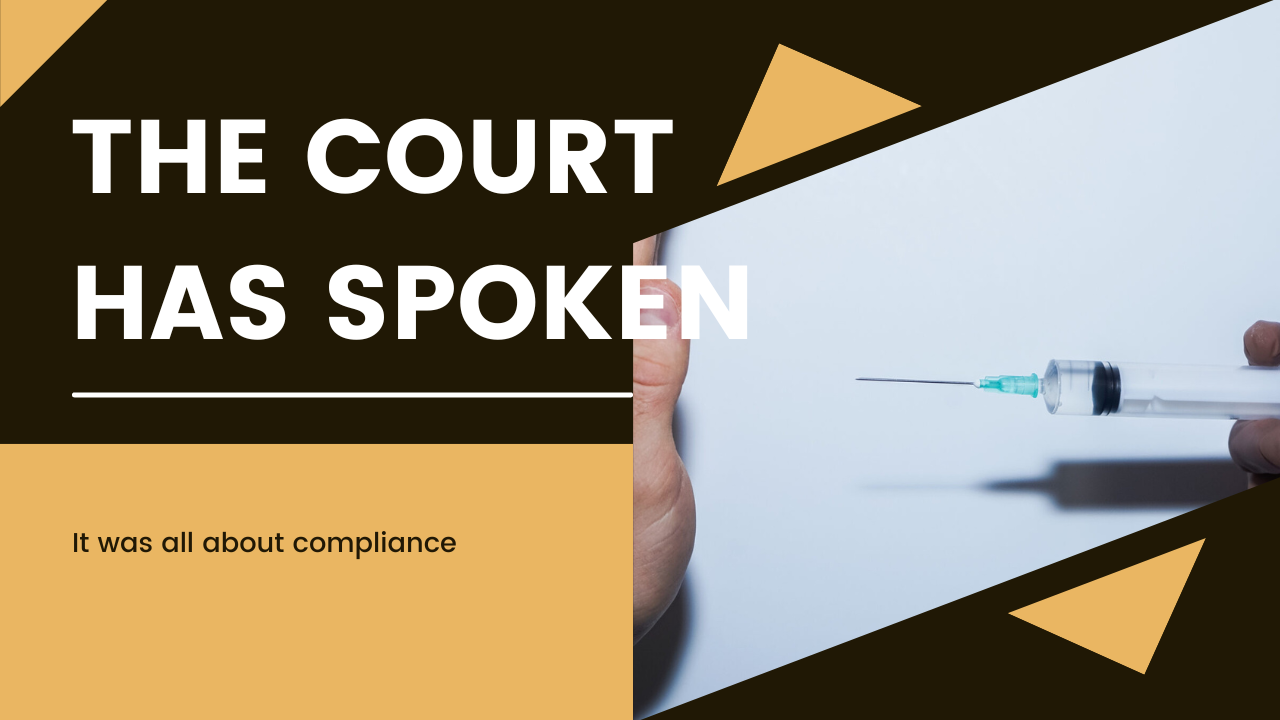 Hello this is Darrell Castle with today’s Castle Report. This is Friday the 28th day of October in the year of our Lord 2022. I will be talking about a very important decision of the New York Supreme Court to strike down the city’s vaccine mandate for employees, ordering them to be reinstated immediately with back pay.

From the Court’s decision:

Now folks continuing the quote from the Court, here is the kill shot for vaccine mandates, at least in the City of New York.

Being vaccinated does not prevent an individual from contracting or transmitting Covid-19. As of the day of this Decision, CDC guidelines regarding quarantine and isolation are the same for vaccinated and unvaccinated individuals.

The Court found that the Mayor opened the door

I just returned from 6 days in New York. So I was very much in a New York State of mind when I read this decision. The court was offended on behalf of the employees of the City of New York who brought this suit originally. Hundreds of people were being told that no matter how many burning buildings you have entered, no matter how many violent criminals you have confronted, no matter how many hours you drove your bus or subway train during the lockdowns, no matter how many sick people you treated, if you do not get a vaccine you personally believe to be more dangerous than the virus, you are fired.

Then, to put the icing on the cake, the Mayor of New York, Eric Adams, exempted athletes, and other performers from the mandates. So the court said that rendered the order arbitrary and capricious. The mandate was affecting New York sports teams from fielding some of their best players and some Broadway performers were banned as Broadway was trying to gain a footing again. In other words, it did not make economic sense to continue the ban against some. The court found that reasoning rendered the order arbitrary and capricious.

The vaccine does not protect absolutely, and everybody knows that

The Court relied on facts that are common knowledge except among the political class. It pointed out that:

President Biden said on national television that the pandemic is over. The State of New York ended the Covid-19 state of emergency over a month ago. The court pointed out that its decision was not about how effective the vaccines were but about how the City’s first responders were treated.

They worked without protective gear. They were infected with Covid-19, creating natural immunity. They continued working full duty while their exemption requests were pending. They were terminated and are willing to come back to work for the city that cast them aside.

The Court also blasted city government officials for abusing the concept of state of emergency, pointing out that such things are supposed to be temporary. The Court held that the Health Commissioner does not have the authority to enact a permanent condition of employment during a state of emergency. To grant the Commissioner such authority would violate the concept of separation of powers.

It was about compliance

The section of the Court’s ruling that may and should have an impact on other jurisdictions around the country was the question of why the mandates continued to be insisted on despite the contrary evidence. Was it about health and public safety? If so, the Health Commissioner would have issued city-wide mandates for all residents. But instead we chose to penalize those who showed up for work at great risk to themselves and their families. If it was about safety and public health:

What then was the order about if not health and public safety? According to the Court it was about compliance. I was glad to read the Court’s conclusion because it was the same as mine has been for some time. Why continue these mandates when it is obvious that the vaccines do not prevent the disease? In fact, why have yourself vaccinated with a substance that obviously does not prevent the disease?

Hey, Rochelle! Your fourth jab, and you got the bug anyway! What’s the point?

Rochelle Walensky, the head of CDC, made a video the other day of herself getting what I believe was her fourth vaccine. Now just a couple of days ago she announced that she has Covid! So what is the point of the vaccine except compliance as the Court pointed out.

Finally, a Court, and not just any Court but the Supreme Court of the State of New York, interposed itself between such decisions and the people.1

Mayor Eric Adams stated earlier this year that his administration would not rehire employees who had been fired over their vaccination status. Some 1400 employees were fired for refusing the vaccine and resisting the extreme pressure to accept the vaccine. Most of those fired were firefighters and police officers. But there were doctors, nurses, bus drivers, sanitation workers and others as well. The Court wondered that since vaccination does not prevent Covid-19, what could be the purpose. then concluded it was compliance.

Reinstatement with back pay

So, the Court ordered them all reinstated with back pay from the moment of termination. The Court said the government of New York violated their rights and acted in an arbitrary and capricious manner toward people to whom it should have instead shown gratitude. By the way, all these employees, every one of them, presented medical evidence ohttps://www1.nyc.gov/office-of-the-mayor/news/062-003/emergency-executive-order-62f natural immunity to the Covid virus. But to the city, compliance was more important.

The various City employee union representatives had condemned the mayor earlier this year for exempting athletes and other performers while firing those who perform the City’s most vital and most dangerous jobs. They demanded that the mandate exemption be extended to them. But it took the State Supreme Court of New York to remove the mandate for everyone and not just for some.

Executive Order 62 was the performers mandate exemption which Mayor Adams said would put the City’s sports teams and Broadway Shows on a level playing field with other cities. Most people could immediately see the hypocrisy in exempting those people while firing firefighters and police officers. Apparently though, Mayor Adams is not most people because he refused to see it, until he got a lesson in forced compliance from the State Supreme Court.

Just like the flu shot? (Maybe that’s the trouble)

The Mayor of the City of New York and ohttps://www1.nyc.gov/office-of-the-mayor/news/062-003/emergency-executive-order-62ther such government officials around the country have a good example to follow in their arbitrary and capricious compliance orders. President Joe Biden went on camera to receive his fifth vaccine dose last Tuesday the 25th. He urged all Americans to do the same despite the fact that the booster he received will do nothing to deter the Covid virus. The President is pushing for a yearly shot for the entire population. But apparently only about 10% of the eligible population have received the latest booster. He received his fourth shot last summer and then caught Covid. But never mind, don’t look, just roll up your sleeve and be terrified by the propaganda.

The President said the vaccine is “just like the flu shot,” and also:

For most Americans, one Covid shot each year will be all that they need.

The CDC’s official numbers are that 8.5% of eligible people have had the latest or fifth shot. The State of Florida has said no to children under 18 and males under 39 citing the low risk of the virus to children and the elevated risk of cardiac events to men under 39. Several European countries have issued similar recommendations in recent months.

The CDC makes it worse

Here in America, the CDC still recommends the vaccine for children as young as five. There is growing fear that the Covid vaccine will soon be mandatory for children to enter school or play sports. The CDC recommends these things to us which makes me fear that the CDC, its boss, big pharma, and the U.S. government have some agenda that is more important to them than the health of American children.

The world is making progress toward satisfying the demands of big pharma and the global establishment. According to the World Health Organization almost a third of the world’s population is unvaccinated. Or said another way more than two thirds of the people on Planet Earth have had the vaccine. The numbers across Africa show a much lower vaccination rate. So the rest of the world’s numbers are higher than average.

Interesting figures considering the New York Supreme Court’s conclusion that the vaccine does not prevent the virus. The President warned us on Tuesday to avoid ideologically driven inclinations to reject widely available vaccines during the coming cold seasons. A reasonable person might logically conclude that he is the one driven by ideology. He asked the country to start fresh leaving politics aside. But how can we do that in light of the insight presented to us from the court’s decision. Perhaps that is why the decision has not been widely reported.

This year is different from the past. This year, nearly every death is preventable. We can do so much to reduce the number of people who die from this terrible disease. We have the tools, we have the vaccines, we have the treatments.

The Washington Post reported the President’s obvious frustration at having people reject free vaccines. We’ve done our part, he was saying, now why don’t you do yours.

Finally, Folks this is indeed frustrating. We hear from the Supreme Court of New York that the vaccines do not prevent Covid, and the mandates are or were about compliance not health. The frustration is the President continuing to beg, plead, and intimidate the American people into having a vaccine that is obviously worse than useless. The wellbeing of your children is in your hands, not the government’s at least for now. The issue is not Party Politics, it is the health and future of your children. Vaccine for prevention of disease or biowarfare weapon? That is the question you must answer for your children.

This transcript comes from CastleReport.us and appears here by permission.