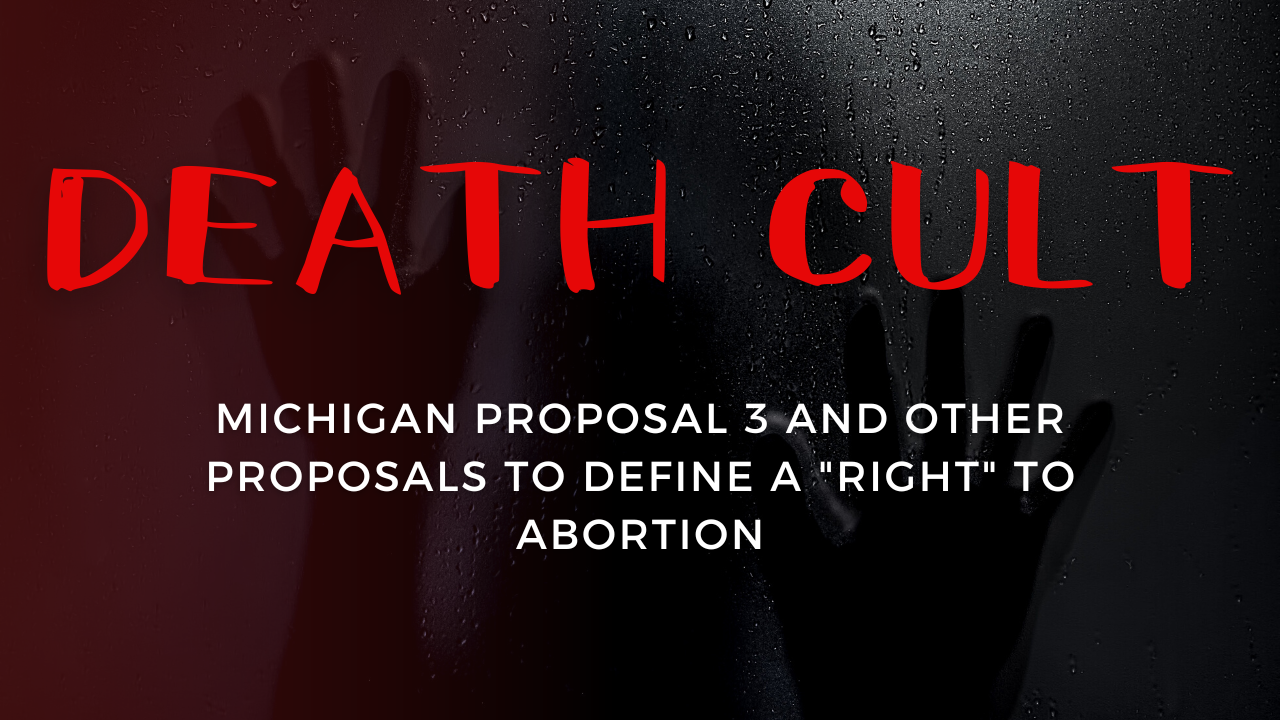 No wonder why the Lord curses and judges nations for not laying to heart (Malachi 2:2).

Yet, all the while knowing this, we continually hear governors and those running for office act and speak as if to suggest that this is legal and that it is a constitutionally protected right. When it is not; and they all the while know that it is not (Psalm 94:20). Also, read 2 Kings 24:4 and Numbers 35:33.

All those in God’s Creation have a RIGHT to Life, liberty, and the pursuit of happiness. And that includes the babies in the mother’s womb.

Secondly, I was just in Michigan doing speaking engagements. While I was there, I noticed signs on the yards of the people throughout the state in protest of something that is being proposed by the tyrannical governor there called “Prop 3.” Remember, this is the same governor that wears a pink hat during photo opts that state “Planned Parenthood,” “Make America Great Again.” She is, without a doubt, a modern-day Jezebel.

They want you to believe that the purpose of government is the right to murder (Exodus 20:13) when the opposite is true. They are literally hell bent on death, and especially that of the unborn.

Apparently, Gretchen Whitmer is not considering her end (Galatians 6:7) nor are the people that are tolerating her intended crimes. This is what Prop 3 proposes.

Details of Michigan Proposal 3 – giving a right to abortion

Proposal 3, sponsored by Reproductive Freedom For All, would amend the Michigan Constitution to:

•Guarantee that “every individual” in the state has a “fundamental right to reproductive freedom.” That would include the right to make decisions about abortion, but also prenatal care, childbirth, postpartum care, contraception, sterilization, miscarriage management and infertility care.

•Still allow elected officials to prohibit or otherwise regulate abortion after a fetus reaches “viability.” However, the state could not prohibit any abortions that a medical professional deems necessary to “protect the life or physical or mental health” of the pregnant individual.

•Only allow the state to restrict abortion rights if the restrictions are “justified by a compelling state interest achieved by the least restrictive means.”

•Prohibit the state from penalizing or prosecuting an individual based on “actual, potential, perceived or alleged pregnancy outcomes,” including abortion, miscarriages and stillbirths.

In other words, the state assumes authority in all cases for abortion, as well as assuming control over the children without parental oversight. Sounds like Adolph Hitler’s Germany’ does it not?

A challenge to public officials: does the State have children?

I have a question for all the incumbents attempting to pass this unconstitutional and tyrannical proposal. Since when did the state have children? They do NOT!

Opponents argue the proposal would also invalidate other existing abortion regulations, including a parental consent law for minors that lawmakers approved in 1991 after a separate petition drive by Right to Life of Michigan. The fate of those laws is murky and may depend on future court rulings.

The amendment “is not about protecting existing rights, but smuggling a radical proposal into the constitution that would repeal or drastically alter dozens of state laws,” according to Citizens to Support MI Women and Children.

I have to say that when this information was first brought up that my response to it was that it is nothing short of a provocation to war by attacking the life of the innocent and usurping parental rights.

Again, the state has no children. And for them to create these proposals and stand behind them shows you how unqualified and purposed these murderers truly are (John 8:44).

Don’t get me wrong, friends, this is murder! This is NOT American government. This is a cult operating under the guise of government that is inspired by the devil himself (John 10:10)!

This is child sacrifice! Americans are accomplices to these crimes before God by tolerating these crimes (Mark 11:23).

Don’t assume it will not pass

With that said, do you know what I heard from the people concerning these proposals? “It will not pass.” I’m not making this up. I hear halfhearted people say just that. No wonder why the Lord curses and judges nations for not laying to heart (Malachi 2:2).

The people of Michigan have suffered abuse after abuse under this tyrant’s totalitarian regime. The criminals are protecting each other while they assail their constituents (Daniel 3). The people have every lawful right under Heaven to right themselves of these wrongs by rounding every one of these criminals up and to begin the process of impeachment and prosecution (Article II, Section 4; Article I, Section 3, Clause 7 US Constitution). If they fail to do so, just imagine what they have planned for the next round of abuses.

Here’s the latest on abortion in America after the ruling in Dobbs v. Jackson Women’s Health Organization. Such “voluntary terminations” have declined six percent since Dobbs. CNAV predicted that result, or close to it. We stand by the obvious call for a religious awakening that Mr. Dean made shortly after that decision came down.

And consider the same people promoting abortion for any reason and at any time are the same people who would be ranting and screaming murder is some terminated the pregnancy of the dog, cat, or other animal. The simple fact is there are only TWO justification for an abortion. The first is an Ectopic pregnancy which will result in the mother and child dying. and the second is the child has died in the womb. And remember, a miscarriage is not an abortion. it is an unfortunate failure of the pregnancy.