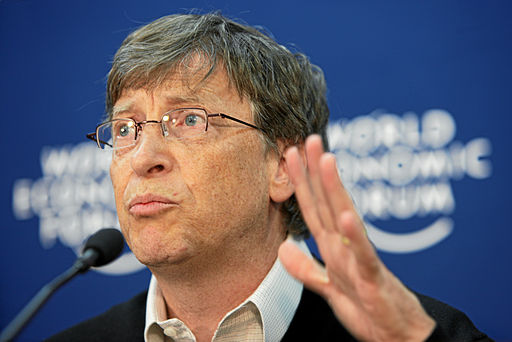 RULE 1: “Power is not only what you have, but what the enemy thinks you have.”

Over the last 3 years, Mr. “Depopulation” Bill Gates has been rightly scrutinized like never before by the people on a global scale.

What we all have clearly noticed was the media’s “useful idiots” doing their best to play down Bill Gates’ opposition in attempting to defend him against the truth (Proverbs 19:9). They did all this while promoting others that are involved in the same propaganda deceptions (Proverbs 17:15).

Yet, this is the same media that has attempted to debunk Bill Gates’ forecasting these plandemics by saying that he did not say the things that he very clearly said.

“The world has 6.8 billion people…that’s headed up to about 9 billion,” said Gates during a TED Talk.

If we do a really great job on vaccines, health care, reproductive services [Planned Parenthoods], we could lower that by perhaps 10 to 15 percent.

This is the same Bill Gates, the same defiant and murdering, the cunning and deceptive, the wicked and hell-bound minion of Satan himself, unqualified, unlicensed and un-elected, somehow or another, who has been given permission to drive the narrative on the virus and, in the end, to drive the people to the dangerous vaccines (Leviticus 17:11; John 8:44; Ephesians 4:14).

This is also the same Bill Gates that wants you to believe that it is the anti-maskers and anti-vaxxers that are the responsible party (Revelation 12:10). When the reality is that they are the ones that see him for who he is (2 Corinthians 11:14-15).

This is also the same Bill Gates whose ideals were formed from that of Planned Parenthood (Proverbs 6:7).

When it comes to likes of Facebook illegally censoring the people, the people who have exposed the agenda for what it is, what else would you expect from them except break the law (1 John 3:4)?

In conclusion: They are selling the idea that these criminals have massive support from the people at large.

Do you remember when we found that Hillary Clinton’s Twitter accounts were fabricated out of thin air, and Barack Obama’s, as well?

They want you to believe that they have the support when they do not! This they do to put themselves into a better light and position of power.

RULE 1: Power is not only what you have, but what the enemy thinks you have.

People need to understand that these devils operate upon deception, which is the act of deceiving or misleading.

It is also this same small group of people that would have you believe that Bill Gates, one of the most hated and despised monsters on the planet, somehow has 42 million followers. Really? You know because the enemies would have you and me to believe that Bill Gates has 42 million people in support of his murderous cause. If that were true, why does Bill Gates only have 37 people following him? THINK, people! Think (Hosea 4:6)!

Revolution is in the air