The release yesterday of the apparent long-form birth certificate for President Barack H. Obama has done little to settle the debate on Obama’s citizenship, and has raised further questions varying from whether the document is authentic and whether it might show that Obama is not a natural-born citizen.

The document, embedded below, is a “Certificate of Live Birth,” not to be confused with the “Certification of Live Birth” that merely attests that a traditional birth certificate is on file. The form looks like a photocopy of a page in a bound ledger, and conforms in most respects to the forms of other “Certificates of Live Birth” issued in that same year. 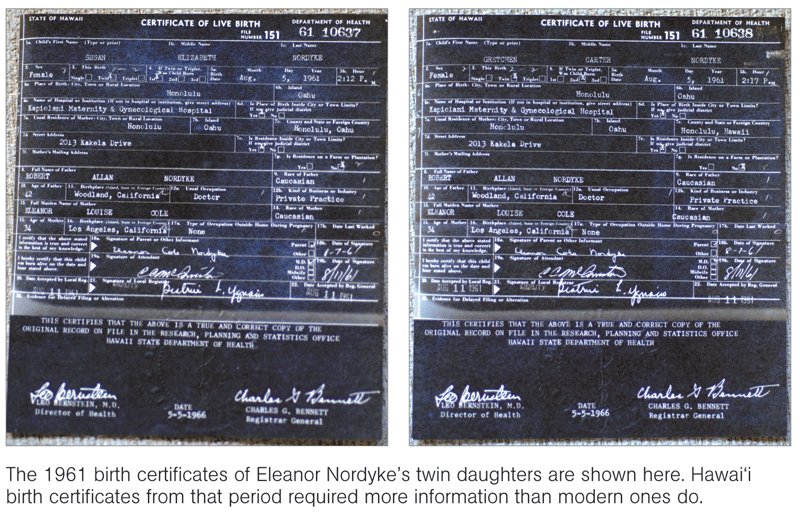 The best example of a Hawaiian long-form certificate available for examination is this pair of certificates for Susan and Gretchen Nordyke, born at Kapi’olani Maternity and Gynecological Hospital on August 5, 1961. (Note: earlier reports that the Obama certificate mis-named the hospital are unfounded. The Nordyke twins’ certificates name that same hospital. The original Kapi’olani Maternity Home, that Queen Kapiolani founded in 1890, carried that name in 1961 and would continue to carry it until 1978, when it merged with Kauikeolani Children’s Hospital to form the present Kapi’olani Medical Center for Women and Children.)

But within the past twenty-four hours, many observers have examined the PDF file that the White House released, and have raised questions that seriously challenge its authenticity.

In making the Obama document, someone has, at least, copied a document from a book, reversed the usual foreground and background colors (from white text on a black background to black on white), and then added a texture of short green line segments on a white background. Those lines do not follow the curvature of the book photocopy. That alone would be inconclusive; perhaps someone sought to “prettify” the document to make it seem official and as near to an original as possible. That the texture does not actually touch any of the black characters or lines, but always remains 1/32 of an inch shy of them, is further evidence that the texture is an afterthought.

Also, two separate observers have each opened the document in the Adobe Illustrator program and found that the file contained nine separate layers. They have published their findings in separate videos:

Scanning a document and importing the image into Adobe Illustrator would still leave all the image content on a single layer.

The texture is obviously one layer. The other eight are various portions of the form. Tellingly, the date of certification of the copy is on a separate layer. But even the date of acceptance of the form by the Hawaii Department of Health splits between two separate layers, one containing the terminal digit “1” and the other containing the rest of the date. (The digit “1” is noticeably darker than the rest of the date.) More tellingly, the signature of attending physician David A. Sinclair is on its own layer, as are the names “Stanley” and “Ann” of Obama’s mother.

One observer suggests that whoever prepared this document forgot a key step: to “flatten” the document, i.e., save the contents of all layers into one layer.

Beyond these flaws in the file, Jerome Corsi of WorldNetDaily points out that the certificate number of the Obama document is out of sequence. Specifically, the Nordyke twins have lower certificate numbers than does Obama’s certificate, this although they were born a day later. And Aaron Klein and Brenda Elliott, authors of The Manchurian President, point out that the document states that Obama’s father was one Barack H. Obama Senior, born in Kenya in East Africa and hence a British subject. The certificate does not ask for citizenship or subject status of the parents, but no one has even alleged that Obama Senior obtained American citizenship through naturalization or even that he was present on American soil when his then wife, Stanley Ann Dunham Obama, gave birth.

“We are ecstatic,” said Nicholas E. Purpura, one of two New Jersey activists who are suing the federal government to block the massive healthcare-reform bill. Among other arguments that they have made, is one that Obama has no authority to sign any legislation because he was not a natural-born citizen. But their challenge has never been that he wasn’t born in Hawaii as he claimed. Rather, they cite Obama Senior’s British subjecthood.

By releasing this document, Obama has as much as admitted that he is not a natural-born citizen. This release alone goes directly to our argument of standing.

A court recently dismissed that lawsuit, saying that Purpura and fellow plaintiff Donald R. Laster Jr have no standing to challenge the constitutionality of the law. Purpura said today that anyone has standing to petition the government to redress a violation of the Constitution.

If I don’t have standing in this kind of case, then the court has disenfranchised me. This goes directly to my privileges and immunities as a citizen.

Whether the Birth Certificate is genuine or not is irrelevant. What is of the upmost importance is that it is now documented that Mr. Obama’s father was not a citizen of these United States, [thus] rendering Mr. Obama ineligible to sign HR 3590 into law!

NJ activist: Obama has disqualified himself

[…] by wits0, from Conservative News and Views we find why the hospital name is a non-issue: The best example of a Hawaiian long-form certificate […]

Yes, modern-day compression algorithms have been a boon for conspiracy theorists… Rock on reptilian believers!

Thank You For This Blog, was added to my bookmarks.

My Homepage Many thanks for another excellent article. Exactly where else may any person get that sort of details in published in such a very clear way. I’ve a presentation in a few days, and I was looking for precisely the info you’ve got just presented me. Many thanks.

My Homepage Many thanks for another excellent post. Exactly where else could anybody get that form of information in published in such a clear way. I’ve a presentation in a few days, and I was searching for precisely the advice you have just presented me. Bless you.

Natural-born citizen – what that means - Conservative News and Views

[…] he did finally release one on request, expert after expert has stepped forward saying that it is not only a fraud but an amateurish one. It is as if Obama wants people to concentrate on the site of his birth and forget that his father […]

Dare one call it treason? | Conservative News and Views

[…] April 27, 2011, Barack Obama presented as his official birth certificate a digital image so riddled with anomalies that only counterfeiters or the complicit could vouch for […]