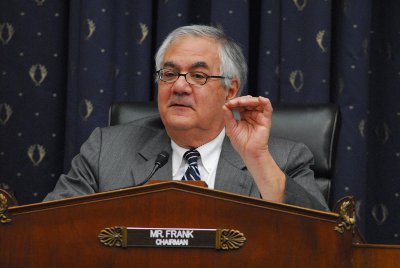 Barney Frank told The Boston Globe today that he did not “compromise” his “legislative role” when he got his live-in partner Herb Moses a job at Fannie Mae. But the facts of the case raise eyebrows.

What does Barney Frank have to say for himself?

Congressman Barney Frank says he did not recommend his partner for a job in the early 1990s. He says he never told Jerry McMurray (a high-ranking administrator of Fannie Mae and longtime friend of Frank) to hire Moses. But what did Barney Frank tell Jerry McMurray? He told McMurray that Moses had the credentials for the job and would be a good choice. (Wink! Wink?) If that’s not pulling a string or two, what is? We hear that at first McMurray did not know about Moses’ and Frank’s relationship (although they are “longtime friends”). But McMurray did learn of their relationship during the interview process. In other words, McMurray learned of their relationship before hiring Moses.

While this was happening, Barney Frank became a member of the House Financial Services Committee. This Committee oversaw the mortgage giants Fannie Mae and Freddie Mac (FM) and considered new laws to improve that oversight. In 2006, Frank became its Chairman.

Barney Frank has tried to clear his name of any wrongdoing. He reminds us that he voted “present” while the Committee considered a bill that would have affected executive salaries at FM. He acknowledged that would have been a conflict of interest. But he denies that his failure to catch the warning signs that FM were writing risky loans was anything more than an oversight. That “oversight” cost this country $150 billion in stocks and $1.36 trillion in mortgage-backed securities that we had to finance. And let’s not forget that this debacle started the downward financial spiral that this country is in. It also helped bring our unemployment rate to over 9%. Yet Barney Frank still has his job representing Massachusetts District 4.

Barney Frank and the financial crisis

Frank owns up that the problems started in 2000. But he won’t own up to knowing about it when it happened. Does that confuse you? It should. How can Frank own up to something that he doesn’t know? Is that like overseeing something while looking the other way?

Another thing: Jerry McMurray personally contributed to Barney Frank’s campaigns in 1995 and 2000, the same year FM’s troubles supposedly began. And: FM made a $25,000 contribution in 1994 and a $50,000 contribution in 2001 to a Boston organization that Frank’s late mother co-founded.

How did Barney Frank win re-election?

Amazingly, in the wake of this disaster, Frank won re-election to the House of Representatives. Special interest contributions to incumbents who oversee such travesties by looking the other way seem to happen all the time. Incompetent or corrupt legislators affect not only their constituents but also the well-being of the country. Nothing illustrates this travesty more than the re-election of Barney Frank. And nothing illustrates the need for term limits more than this particular course of events. Many argue that voters can impose term limits in the voting booths. They forget that special interest money, and the power of those in office for too long, can lull voters into complacency. (Yawn!) Hit the button on the touch screen and get out of here. I don’t have time to think about it, as long as he keeps the Social Security checks coming.

Our founders never wanted this. They wanted “citizen” legislators, not political elitists. They designed a system of proportional representation in the House, so that the people in any town would have a level playing field. Today, junior Representation are less equal than seniors like Barney Frank. So the districts they represent are less equal than others. Representatives like Frank receive monies from special interests. They also receive the best chairmanship appointments, because they are seniors. This protects their influence and their ability to attract money from special interests. O, what a tangled web of power and money they weave! And We the People are the prey caught in this web.

We all live downstream. The stench of failed political programs and corrupt legislators fills the air we breathe. The Congress recognized how important term limits were for presidents. But they did not apply the same standard to themselves or to any legislature. So today we live in a world where power brokers and special interests, not servants of We the People, dominate. Somehow, someway we must stop this insanity. If we do not, then no matter what party you support, you can expect more of the same political games that have led us down the path of insolvency and unemployment.

Is our Constitution outdated?