The Obama campaign is already some nine months too early. And once again, Obama is using public, taxpayer-bought and taxpayer-kept resources for his campaign. The Presidential plane wasn’t enough. Now he is using the White House itself as a prop.

Latest from the Obama campaign

Two days ago the Obama campaign advertised a raffle: five dollars buys a chance to have dinner with the President and possibly the Vice-President as well. At first, Fox News made a joke of it. Their Special Report program spliced together a memorable sequence of people panicking at the thought of sitting at such a table. One scene shows people rushing pell-mell out of a theater. Another shows a man jumping through a plate-glass window of a high-rise office building.

Then yesterday morning, Jim Geraghty of National Review noticed something else. The Obama campaign filmed that raffle ad inside the White House. A lamp in the background is the same lamp that appeared in a White House address to the residents of Berlin in 2009. (All videos below.) The Federal Election Commission rules do not permit this. (RealClearPolitics has images from more White House videos that feature this lamp.)

But the Obama campaign hasn’t stopped at using White House rooms. (Living space? Work space? That’s in dispute.) They are also using White House personnel. This from The Washington Post, another gem that Jim Geraghty found:

To do so, Obama and his aides are leveraging every asset available to a sitting president — from access to top West Wing officials to a possible food tasting with the White House chef.

Geraghty wonders whether now the Obama campaign has broken the Hatch Act. Under that law, non-elected government employees do not work on campaigns. Period. End of memo.

ABC News’ Jake Tapper reported the detailed response of White House and Democratic Campaign officials. They said that Obama had acted legally, because he has used the living quarters, not any office, for the video. The DNC also said that they had paid for the ad. By that they meant that they paid for the crew and for any incidental expenses.

Past practices of the Obama campaign 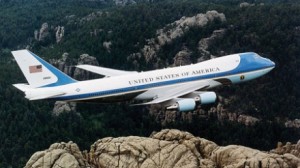 But the DNC, as far as your editor has found out, never reimburses the taxpayer for the use of the President’s aircraft. On Monday afternoon, the President flew to Iowa. Everyone, including Jake Tapper, knows that that was a campaign stop. (The Wall Street Journal reports that Obama even said that he was trolling for votes.)

The VC-25A that carries the august call sign “Air Force One” (when the President is aboard) costs plenty to maintain and to fly one mission. This goes beyond the flight crew. A Presidential mission includes a crew of twenty-six, plus a full surgical team. Add to it that the VC-25A (a custom Boeing 747-200) gulps a great deal of fuel, far more than on any training mission. (The VC-25A is overdue for a “system’s review.” Very few 747-200 planes are still in service.)

So why doesn’t the Obama campaign reimburse the taxpayer for the President’s campaign trips? No one’s asking, other than CNAV. National Review at least asked whether filming inside the White House to raise money was legal. But this is a good time to ask why Air Force One is flying campaign missions. Especially when one mission costs far more than even renting out a White House room for a TV spot would cost.

How else is he expected to travel, if not by Airforce One? Presidents have private planes for security reasons.

What do you expect? Mr Obama is a narcissist who believes he can anything and everything he wants. He needs to reimburse the tax payers for this personal use of government (i.e. tax payers and citizens) property.