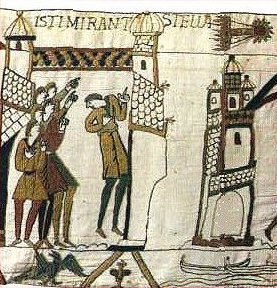 Comet Elenin (C/2010 X1) has provoked much vain speculation of doom. It is also a curiosity and a puzzle to creation science.

What do we know about Comet Elenin? 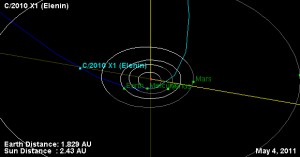 Comet Elenin will fly close by the sun and the earth this fall. Diagram by NASA/JPL/Caltech

Leonid Elenin, an amateur astronomer in Russia, first saw Comet Elenin on December 10, 2010. The best guess of its size: 3-4 kilometers wide. That sounds large, except that a comet is mostly snow, with a small rocky core. It is a long-period comet; conventional astronomers guess that it takes 11,600 years to make one complete orbit. Its orbit is inclined 1.8 degrees from the orbit of the earth around the sun.

On October 16, 2011, it will pass within 34.4 million kilometers (21.6 million miles) of earth on its way out from the sun. The planet Venus comes about as close as that. Venus produces no tidal effect to speak of. Comet Elenin is not likely to produce a tide high enough even to measure.

Nevertheless, many have speculated about Comet Elenin since Leonid Elenin first saw it. As anyone could have calculated, Comet Elenin is much closer to earth now than it was then. People have always connected comets with disaster. (In fact the word disaster, or evil star, was the original name for a comet.) Queen Matilda recorded in her famous tapestry that Comet Halley heralded the coming of her husband, King William I (the Conqueror). When Comet Halley appeared in 1910, the earth passed through its tail. People feared that the tail contained deadly poisons strong enough to kill all life on earth. (In fact, some comets, like Hartley 2, give off cyanide and other gases, but not nearly strong enough to kill even the smallest animal.)

That has not stopped many Internet users from speculating wildly about what Comet Elenin will do on its close approach:

What does creation science say about comets?

The favorite theory among creation scientists is that God made the comets on the same day that He made the sun, moon and stars. But why would a God of order populate the solar system with such disorderly objects as comets?

Walt Brown, of the Center for Scientific Creation, has another answer: comets formed from water and rock after the Great Flood ejected them into space. This would explain many things that scientists (of whatever stripe) know about comets. The major axes of their orbits point at random. Some comets (not Comet Elenin) move in highly inclined orbits. Some comets revolve backwards around the sun. Comets are either long-period or short-period, with very few in-between.

But comets like Elenin present a slight problem. No comet should have a period longer than about 4400 years. In fact, Elenin will probably join the 465 comets with orbits so long that they are almost parabolic, hence open.

But are we seeing Comet Elenin for the first time? Brown records twelve instances in which astronomers said that they had seen new comets, but the comets turned out to be the same as other comets that other astronomers had first seen 100 to 900 years earlier. (Their inclinations, close-approach distances to the sun, eccentricities, and so on are too much alike to be coincidental.) Elenin could still turn out to be number thirteen.

But why would any comet appear 900 years apart, yet move as if it took longer than 4400 years to fly away from the sun and come back? The answer: the solar system is heavier than first thought, by as much as 70 times the mass of Jupiter. The extra mass lies beyond the orbit of Neptune. That much mass could pull a comet back toward the sun more quickly than anyone would expect. The comet would then keep the extra energy; hence the seemingly longer period.

In short, Comet Elenin does not signal disaster. It tells of a disaster 4400 years ago. What NASA and other space agencies should be doing, is looking for the extra mass beyond Neptune, that gave Elenin and 460-odd other comets more energy than they should have.

Featured image: onlookers gaze in shock at a comet, shortly after the crowning of King Harald, last of the Saxon kings. From the Tapestry of Bayeux.

Silicate volcanoes on lunar far side