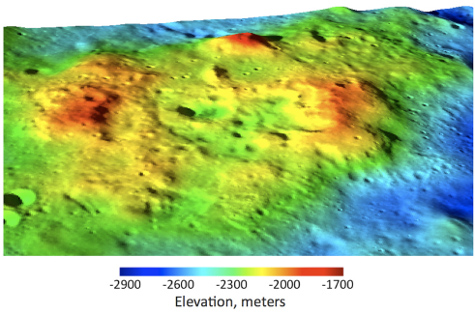 NASA scientists have found several silicate volcanoes on the moon’s far side. But the accounts of this find raise more questions.

Where are the silicate volcanoes located? 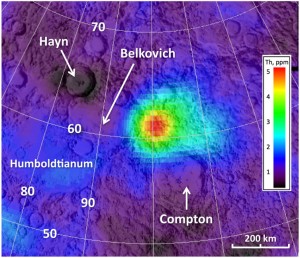 This image from NASA's Lunar Reconnaissance Orbiter shows a region on the far side of the moon between the Compton and Belkovich craters. The colored region marks a high amount of the mineral thorium, which is thought to have been deposited by rare silicate volcanoes in the past. CREDIT: NASA/GSFC/ASU/WUSTL, processing by B. Joliff

The Lunar Reconnaissance Orbiter took pictures of several steep cone-like mountains with domes on top, all lying east of Humboldt’s Sea at the edge of the moon’s far side. Lunar scientists named the place the Compton-Belkovich region, after two nearby large irregular craters. The region lies roughly between 50 to 70 degrees north lunar latitude and 90 and 120 degrees east lunar longitude.

Most of the volcanic activity on the moon was basaltic. Basaltic eruptions produce a large lava flow. On the moon, this produced the maria, or “seas.” Most of these are on the near side; the largest is the Ocean of Storms, where Apollo 12 landed. One “sea,” the Moscow Sea, lies on the far side, in the southern hemisphere. Another, Humboldt’s Sea, is barely visible on the near side and continues into the far side. The Compton-Belkovich region lies east of Humboldt’s Sea.

Silicate volcanoes produce the classic cones that we see on earth. They are rare on the moon, though how many lie buried in the maria, no one can guess. The silicate volcanoes in the Compton-Belkovich region lie close to Humboldt’s Sea, a basaltic structure.

How did these silicate volcanoes form? 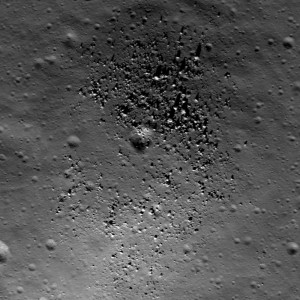 Small dome in the Compton-Belkovich region (61.33 °N, 99.68 °E). Evidence indicates a volcanic origin for this and other intriguing features in the region. Incidence angle is 64°, Sun is from the SSW, image is ~510 m across. CREDIT: NASA/GSFC/Arizona State University

That is the key riddle. Brad Joliff of Washington University, the lead investigator of the recent study, makes the same assumption that every lunar geologist makes. He assumes that all the heat that produced these and all other volcanoes came from within the moon. The moon does have a liquid core surrounding a solid ball of metal. But that core lies very deep to the lunar surface. How magma could have forced its way to the lunar surface, no one has ever guessed. (Joliff guesses, from the relative lack of nearby impact craters, that these silicate volcanoes that he found last erupted 800 million years ago. That’s 200 million years more recent than anyone expected.)

How accurate are these guesses?

That’s another good question. These guesses are just that: guesses. No one has ever validated them.

Nor is this the only kind of guess that people make about the moon. Some of these same scientists guess that a lot of thorium, a radioactive element, is present on the moon. In fact, they guess that thorium lies in the same Compton-Belkovich region where Joliff’s team identified the silicate volcanoes.) They claim to know this by using an instrument with an ironic name: the Diviner Lunar Radiometer Experiment. This is not a radiation counter, but a spectroscope. It looks at the light reflecting from the surface at different times of day. From this, scientists like to think that they can tell what sort of rocks lie on the surface. The article says that the rocks are silicate-rich, but one can tell that from the cones. (Silicate volcanoes form cones; basaltic volcanoes cannot. Silica is much thicker than basalt.) But this article has no details to show how anyone can say for certain that they’re looking at thorium.

Walt Brown of the Center for Scientific Creation has another idea. The silicate volcanoes, like the massive basaltic flows that produced the maria, got their heat from impacts. In this case, one or more asteroids, laden with silica, fell to the moon and released all its energy as heat. This impact came late in the Great Lunar Bombardment; hence the lack of craters from smaller impacts. (This impactor might, or might not, have held thorium.)

Brown, of course, does not accept the multi-million-year time scale that Joliff uses. The “crater dating” that Joliff used, assumes that all things that make impact craters, strike the moon today at the same rate that they always have. No one can ever prove that. Furthermore, the same Great Lunar Bombardment that produced the lunar seas, gives the lie to that proposition. Otherwise, the moon and the earth itself would be in constant danger of a strike from a meteor as big as one of the seven that struck the moon all on one side to cause it to become the near side.