First, Obama could not have picked a worse time to go on tour. First Standard and Poor, and then the stock market, repudiated his policies. The very shocking thing he said would happen if Congress made no deal on the debt ceiling, happened anyway. Then, on the day before the Ames straw poll, the Eleventh Circuit Court of Appeals repudiated his health care reform bill, in the strongest terms yet.

So naturally, he has to go on a bus tour, at a cost of millions of dollars for the buses alone. And as is second nature to him, he must blame anyone and everyone but himself.

Does Congress suffer from broken politics? Yes, but not in the sense in which he means it. Congress has had “broken politics” for years. But the cause is not merely a division between two parties. It is a division of ideas. One side has the idea that “that government is best that governs least.” The other has the idea that only the government can guarantee happiness to all. That is the idea of the Democratic Caucuses in Congress. That is the idea of the man now holding office as President. And that is why Barack H. Obama’s politics are more broken than anyone else’s.

With all the false charm at his command (for only Barack H. Obama can make arrogance sound charming), Obama repeated his vision for America. He said that Congress could “create jobs” tomorrow. And what kind of jobs? “Rebuilding America,” he says. Oh—like those “shovel-ready projects” he mentioned two years ago? Like the special “Putting America to Work” signs that went up on so many of the highways?

In Obama’s ideal society, everybody works—for the government. At best, they’ll build highways leading to places that attract no traffic—perhaps the places that already have airports with empty flights to serve them, flights that the government pays for. At worst, they’ll build the highways and airports and so on for use only by the well-connected. Or maybe Fareed Zakaria described what he meant on his Sunday talk show:

[W]ouldn’t John Maynard Keynes say that if you could employ people to dig a ditch and then fill it up again, that’s fine, they’re being productively employed, they’d pay taxes?

Now that’s broken politics, if make-work projects are the only way to employ people. Never mind that the wages of those ditch diggers (and ditch fillers) come from someone else’s taxes. Taxing the wages of government employees can never pay for those government jobs. 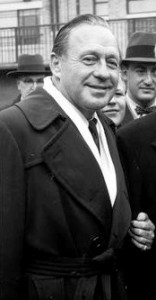 So who else pays for it? Answer: the taxes come from those fabled “millionaires and billionaires” that Obama keeps talking about. Once his high-tax threshold was $250,000; now he says that it’s $1 million. (And by the way: any of those real billionaires who say that they ought to pay more taxes may do so at any time. All they need do is follow this link, not prattle about broken politics, or about coddling.)

Aside from whether you can believe him or not, he has not come close to showing just cause why any class of citizens should have to pay people to dig and refill ditches. Or to do anything else except to protect people from criminals and armed invaders, and settle disputes peaceably.

To be fair, Obama has not made the most outrageous attempts to defend such policies. Witness Paul Krugman’s apparent call for creating a scare about an extraterrestrial expeditionary force (think Battle: Los Angeles) to stimulate defense spending. But Paul Krugman is not a member of Congress. He can still say outrageous and irresponsible things. People are free to heed him—or not—as they please.

When a man holding office as President says outrageous things, that’s different. That is what broken politics really means. And when a Member of Congress says them, that’s almost as bad. So when certain Senators and Representatives say that “the rich” ought to pay extra, because they are getting “the benefits of social order,” that rates a closer look.

Your money, or your life!

Once again, Benjamin Kubelsky, better known as Jack Benny, gave the most charitable answer to that kind of threat:

I’m thinking it over!

In fact, the only answer that such language deserves, is the language of an arresting officer:

That a government actually makes that threat is the real sign of broken politics.

As much as I agree with this commentary about the deadening politics of Obama, I have to conclude that our country deserves what it voted for. May the Good Lord have Mercy upon us!

Frankly, I grow weary of those who eschew Obama and his liberal extremist policies and agenda, and, who will not decry his unconstitutional [non natural born citizen] bogus “presidency” and his forged birth certificate felony crime. Somehow, I don’t feel sympathetic to complaining Americans, who, are like a housewife, complaining of a kitchen full of rotten potato, onion and egg smells – and, who chooses not to target the stench and throw out the rotten produce………