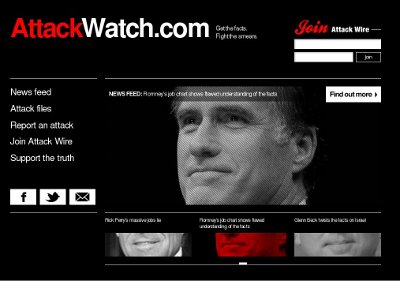 The new Attack Watch web site is Barack H. Obama’s latest project to dismiss as stupid anyone who criticizes him or his policies. It will do nothing but motivate the base—of his opponents.

What is Attack Watch all about?

The Attack Watch site is a project of “Obama for America.” That’s the original Obama campaign organization, that the man now holding office as President has never disbanded.

The site shows white and red text on a black background. It relies on ordinary Internet users to report any attacks on Obama to its special community, Attack Wire. Anyone may “report an attack” on the home page. The webmasters want to know about “attacks” of all types:

Your editor wonders how long it will take before CNAV earns a listing on Attack Watch.

The site asks for donations on many of its pages, from the home page to the terms-and-conditions page for submissions.

The “Attack files” listing on the home page shows the four issues that scare Obama the most. At the time of posting they are:

That’s right: the Troubled Asset Relief Program still embarrasses Obama, even today. But Obama still feels the need to comment on whether he is a natural-born citizen. This “Attack File” on that subject has a link to the same flawed, multilayered document (in PDF form, not JPEG or PNG or GIF) that Obama offered before. Bob Unruh at WorldNetDaily noted one issue that Attack Watch will not discuss:

There also are those who argue that even should Obama have been born in the U.S. as he claims, his father’s status as an alien precluded him ever from qualifying as a “natural born Citizen.”

Among them: Nicholas E. Purpura and Donald R. Laster, Jr, plaintiffs in Purpura v. Sebelius, the most comprehensive lawsuit against the health care reform bill. Among their fifteen counts, they say that Obama never had authority to sign the bill into law, because he is not a natural-born citizen. 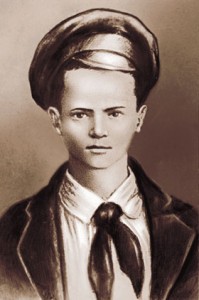 Tommy Christopher and Colby Hall at Mediaite.com both wrote about the site. Hall noted that Attack Wire gained 100,000 members in less than twenty-four hours. Christopher had wondered:

how much of this crowd-sourcing feature is real, and how much is just letting people feel involved. If there’s a guy at OFA whose job it is to sift through these submissions, his is officially the worst job in the world. Let’s not even think about what kinds of attachments that poor guy is going to have to look at.

If Hall’s account is accurate, the quantity of submissions will be far greater than the quality.

This shows that Mediaite.com is laughing at Attack Watch. The Washington Post reports that a lot of Twitter users are laughing, too.

It’s safe to say that in its 24 hours of existence, Attack Watch has already backfired, becoming a tool for conservatives to use against Obama 2012. A tweet by conservative author Brad Thor summed up the critics’s argument: “Wow, not only are Obama & Co. incredibly thin-skinned, they’re paranoid.”

Nadine DeNinno at International Business Times chides the Obama campaign for building a site like this. Among “Five Reasons the Obama Gatekeeping Site is Pointless,” DeNinno says that Attack Watch is mainly a money-raising tool (or a waste of money, or both!). She also said that Obama’s opponents could use Attack Watch against him. Then she asks:

Attacking an opposing belief, isn’t that just the definition of the word “Politics?”

It is. And Noah Rothman is not laughing at Attack Watch. Or is he?

Are your friends and neighbors disseminating attacks or misinformation about the Obama Administration? Well, citizen, now you have a place to report those poor souls to the Bureau of Correct Thought—AKA, #AttackWatch or, on Twitter, @AttackWatch… or on the web at www.AttackWatch.com.

Rothman cites the legend of Pavlik Morozov. Morozov died in a fight over a gun—but Stalin’s government said that his family killed him after he informed on them for counter-revolutionary activity.

[O]ne of you lucky people can be the USA’s Pavlik Morozov—with a healthy love for the regime, you too can inform and be rewarded. See something, say something!

Saul Alinsky (Rules for Radicals) did say that ridicule is a potent weapon. So those who laugh at Attack Watch, do so to apply Saul Alinsky’s rules against one who thought himself Saul Alinsky’s star pupil.

But beyond laughing, every American ought to recoil in horror. No American President has ever done anything like this. Rothman is correct: this is Soviet-style government-by-informer. And they’re not asking for reports of discarded backpacks or abandoned cars that could blow up and kill someone. They’re asking for reports of dissent against the government or attacks on the character of the (supposed) President.

One of us is a stoolie! A dirty, stinking stoolie!

That line from Stalag 17 suddenly became much more relevant than the scriptwriter ever imagined.

Featured image: a snapshot from the Attack Watch site.

Socialism and all of its related “ism” can never survive when faced with the honest debate and real facts. That is why Mr Obama has to use NAZI/Soviet style tactics to attack and attempt to silence his opponents. After all, when one looks at what Mr Obama and is allies have accomplished one finds at best he stalled an economic recovery, and at worst is doing his best to create another Great Depression.

To impose socialism requires the destruction of the current system. For instance, if you want to put a new house where your current house is you have to tear down and destroy your old house.

As Socialism, through centrally planning type regulations, have been imposed on this country over the last 70 plus years our industrial base has been destroyed, our Rights eroded and our freedom – both economic and personal – have been slowly destroyed.

Ask yourself this simple set of questions.

If you are not responsible for yourself then who is?

If the government is responsible for you are you free?

If you are dependent on someone does the someone
have the authority to tell you what to do in return
for the support?

History is harsh mistress when one ignores her lessons. Would Ben Franklin consider us a Republic today? Or the other founders and writers of the U.S. Constitution?

Unbelievable. Disgusting & pathetic. What American would imagine in their wildest dreams that their once “free” nation would someday have an arrogant, anti-America, freedom-hating MUSLIM sitting in our White House? Who thinks he should be a DICTATOR instead of a PRESIDENT?!!

Nazi-style, surveillance type intimidation? Really? Remember, history repeats itself… and the time frame for another mental tyrant to attempt turning their country into a totalitarian, police-state, system of TYRANNY has again arrived. Yet the sinister globalist elite obviously choose to ignore that past control-freak systems JUST DIDN’T WORK! Governments cannot shove treasonous, anti-Constitutional agendas down the throats of a people that aren’t willing to just “comply” and lose their freedoms & sovereignty!

I just went to AttackWatch and submitted an attack: I put in its own website!

Scared, paranoid, very sure to be defeated in the coming elections…..and also sure to go down fighting. Targets will be all GOP rallies and undoubtedly Tea Party functions. Union thugs and enraged, incited “entitled” are sure to make their presence felt. Just be aware that it’s coming. The thin veneer of civility has already been tried and the #1 thug of the union world(Hoffa)has already publicly voiced threats of violence. The teachers unions, SEIU and others have already demonstrated their willingness to be public spectacles and violent. This Internet “connection” is just a bit of fluffy window dressing to fake us out…..just as all things “Obama”…fake, lies and disconnected from reality.

Are you KIDDING me? Obama has to create a “stop the smears” website to validate his sorry presidency? Wow! I thought upcoming election campaigns were supposed to be about discussing REAL issues plaguing your nation and telling voters why you deserve election, not some ridiculous propaganda campaign! That’s all for now.

Imagine such websites under the previous president. Do you think the left would’ve gone along with it?

Obviously not. You’ve nailed it—the double standard. Hitler did the same as Stalin, and I condemn both men. But the left still lionizes Stalin, even long after the Soviets themselves disavowed him.