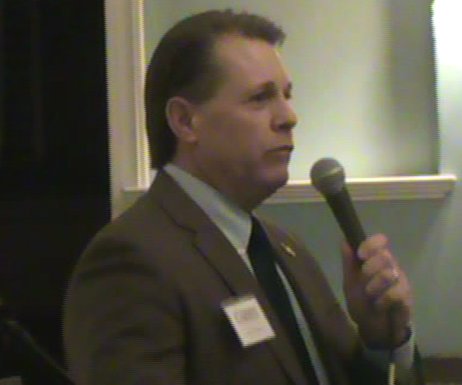 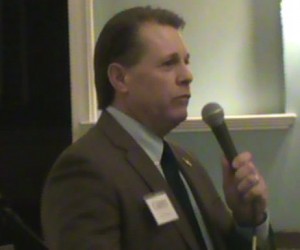 David Larsen announced his challenge on January 5. He made his case to The Morristown Tea Party on Thursday, February 23, at the Masonic Lodge, 39 Maple Avenue, in Morristown, NJ.

David Larsen challenged Lance once before, in 2010. Lance kept his nomination with only 55 percent of the vote, the lowest primary performance of all Republican incumbents and challengers that year. David Larsen did not talk about his loss two years ago, but CNAV can cite two reasons for it:

David Larsen is more likely to win a primary challenge for another reason: thus far, neither Lon Hosford nor Bruce Baker, his fellow challengers, is interested in running this time. In fact, Larsen ran well ahead of Hosford and Baker both, two years ago. (The Star-Ledger has the figures.)

David Larsen said that he was running for one reason:

From the assembled listeners, the answer was “No.” David Larsen also cited the ballooning national debt, and blamed both Congress and the man now holding office as President. He said that Congress especially kept books in a way that he, in his thirty-five years’ experience in business, “can never understand.”

Larsen also criticized “career politicians” who “go from academia straight into elective office” and are more concerned with their cushy jobs, with their high salaries and benefits, than with serving the people.

David Larsen took time to address one issue with which few might be familiar. He called this “Local Agenda 21.” This is the local extension of UN Agenda 21, a project of the United Nations Division of Sustainable Development. Larsen said that Agenda 21 activists have worked for years to destroy property values and ultimately to seize property and force people to move to cities. David Larsen pledged to fight this plan in Congress and press to repeal all its elements.

Larsen and Lance then and now

The fight between David Larsen and Leonard Lance in 2010 was savage. Lance’s team distributed a flier accusing David Larsen of failing to pay his property taxes on his Tewkesbury home. In fact, Larsen had a minor difficulty with his quarterly property-tax payments and worked out a payment schedule with the township. The township was satisfied with Larsen’s good faith, but Lance’s team refused to let the matter rest. They uploaded some documents to Scribd.com to try to discredit Larsen. How they got those documents, no one ever said.

CNAV spoke to David Larsen about a somewhat different plan that Lance and his allies in the New Jersey State Republican Party might have in 2012. Until recently, two men had announced to run for the Democratic nomination in NJ-7. They were Edward Potosnak, who ran against Lance in the 2010 general election, and Edison, NJ Mayor Jun Choi. Jun Choi still has an active web site, which shows that he announced his run in May 5, 2011, and boasted that he had more campaign money than Lance had as of June of last year. (Ed Potosnak seems to have had a Facebook page only; that page does not resolve from a Google search.)

Jun Choi found himself in NJ-6 after redistricting. Instead of moving back into NJ-7, Choi folded his Congressional campaign and endorsed incumbent Rep. Frank J. Pallone Jr. (D-NJ-6).

David Larsen told CNAV that Ed Potosnak withdrew from the race. (Blue Jersey confirms this.) Thus, no one is running for the Democratic nomination in NJ-7. Then Larson told CNAV that Ed Potosnak, shortly after withdrawing from the race, took a job that Governor Chris Christie arranged for him. In fact, according to Blue Jersey, Potosnak became head of the New Jersey League of Conservation Voters on February 18.

In that same interview, David Larsen said that someone, whom he did not name, told him that Christie could find a job for him if he, Larsen, withdrew from the race and endorsed Lance. David Larsen refused to name this person, and said only that he was “a Tea Party man who said that he was ‘coordinating’ with Christie.” He refused any further details about his mysterious visitor. But he did say that he refused the offer, and told his interlocutor:

This isn’t about a job. This is about doing the right thing for the people of New Jersey and District Seven.

For any public official to offer a job, or job placement, to a candidate, in return for that candidate’s withdrawal from his race, is unlawful.

David Larsen predicted that, as he garnered more support in the weeks ahead, some Democrat would hastily declare for his party’s nomination. The Democrats might believe that they can beat David Larsen more easily than they could beat Leonard Lance. Larsen seemed confident that he could beat Lance and, once he did so, he could beat any Democrat who dared run.

So, if what Larson is saying is true, then Christie is guilty of a crime, by offering a bribe to withdraw and giving a job to Potosnak? Surely it’s his obligation as a citizen to report this the police? Or does he feel that doing so would harm his election chances?

One of two things is going on here. Either this unnamed contact who talked to Larsen (that is, about offering a job to Larsen) really has a connection to someone up the line, or he’s just blowing smoke and trying to get a reputation as a facilitator.

Larsen’s problem is not wanting to get into a round of he said, he said.

As to Potosnak, we have here a highly questionable coincidence. One day Potosnak folds his tent; within about three days he’s Exec Director of NJLCV. Ask yourself why the Democrats would call off the only man they’ve got to contest the seat. Then ask yourself why certain Republicans might want to do the same thing.