New Jersey has a Senate race this fall, the first since the Tea Party movement began. On March 10, the New Jersey Tea Party Caucus held its first Senate Candidates forum. Three candidates showed up to endure some intensive grilling.

Businessmen Joe “Rudy” Rullo, Ed Szawiel, and Bader G. Qarmout came to the Town and Country Inn in Keyport, NJ. They came to let ordinary citizens hear them describe their plans and ask them some very pointed questions. They also came to circulate all-important nominating petitions, which each candidate will need to circulate throughout New Jersey to win a place on the primary ballot.

State Senator Joe Kyrillos (R-14-Monmouth Co.) did not show up. His opponents told CNAV that every Regular Republican Organization Chairman they have talked to, acknowledged that they will give Kyrillos the “Party Line” in their counties as a matter of course. That is one of the things that Tea Party activists resent. RoseAnn Salanitri, campaign manager for Bader Qarmout, asked:

Why can’t we have our primary, and let the voters make their best choice? Why must the Powers That Be dictate our choices to us?

(Morris County does not have a “Party Line.”)

Anna Little, who had earlier announced her run for the Senate nomination, did not attend, either. Today CNAV learned that the former mayor of Highlands will end her Senate campaign tonight. A source close to her expects her to campaign instead for the Republican Congressional nomination in the Sixth District and seek a rematch against Democratic Representative Frank J. Pallone. 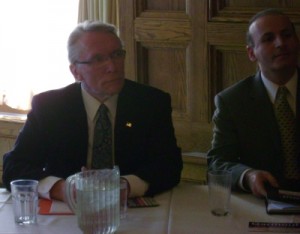 The three candidates at the forum said that they were delighted to speak to a Tea Party crowd. All three stressed their experience in business, not government. Rullo also emphasized his radical solution for immigration: deport, and shut down check-cashing sites that, he says, enable illegal aliens to send money back to their home country (usually Mexico) at American expense. Qarmout had a slightly different take:

You generally hear two extremes: either lock them up and deport them, or else, as Democrats like to say, throw open the door and let them in. The good solution lies in-between.

He stressed his own plan: a secure border, forbidding entry permanently to an illegal alien who commits a crime (other than the unlawful entry itself) on US soil, and a $10,000 fine and a ten-year wait before anyone else caught entering unlawfully may re-enter.

Zimmerman justified after all