The beginning of what hopefully will end the nuclear threat against the annihilation of Israel at the hands of the murderous Iranian Regime is about to commence.

Barack Hussein Obama, the so-called leader of the Free World, wherever that might be these days, has just driven in the last nail of what would be the death knell of the Jewish homeland.  Refusing to meet with the Israeli Prime Minister after a formal request, Mr. Barack, “I will stand with the Muslims if the political winds turn in an ugly direction”, has made it clear where he stands.

All the pieces are in place.  Hundreds of thousands of Israeli troops have been called up and are deployed at the borders.  Ships are at sea, anti-missile equipment has been deployed and the air force has never been better trained.

In a last-ditch effort to get Obama to do something more stern than using empty words and useless trade restrictions, Netanyahu requested a meeting, but was turned down.  You see Obama has very important appointments with a rapper and David Letterman.

How Israel will do it 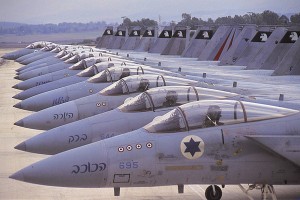 A squadron of Baz Meshopar (Baz-2000) jet fighters, modified from the American F-15 for the Israel Air Force. Photo: Israeli-Weapons.com.

As TPATH reported earlier in the summer the military campaign will not be a one or two-day effort.  For at least a week Israel will not take any action directly against Iran’s nuclear facilities.  The first leg of this war of survival will be to take out Iran’s defenses.  That means missile sites, military storage buildings, air force bases, ships in port and at sea.

Then, while defending itself from the anticipated onslaught along its own borders, the air force, with the help of precisely targeted missiles, possibly including the use of Atomic EMP weapons, will take out every nuclear installation known to the Israelis.

Israel and the USA election

While most Presidential elections in this country, in the past, were not a concern for Israel, this one, clearly is.  Israel knows it can not depend on Obama and if he wins re-election there is no chance he will ever use force to stop Iran’s nuclear proliferation.

This battle for survival cannot be raging in early November. If the US had to get involved, in any way, Obama would breeze to an election victory.  This is the history of the American voter and it is something not only Israel may not endure, but America, as we know it, will not either.

Israel needs to strike hard, precise and quickly.  Then she needs to put down any border wars that will break out and get it done before the middle of October.

The world is on the verge of a very, very dangerous time.  Let us all pray the leaders of not only the free world, but those imposing Islam on its people, will do the safe and right thing.  That is, let Israel do the dirty work for them and stay the he** out of it.

“possibly including the use of Atomic EMP weapons”

If Israel crosses that line they’ll find themselves with a lot more to worry about than Iran. By launching a nuclear attack without justification they will catapult themselves right to the top of everyone’s threat list, and that’s likely to have serious consequences for their own nuclear arsenal – such as its violent removal.