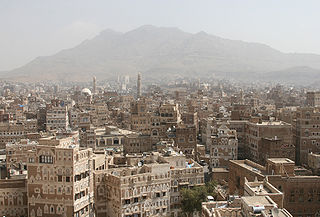 The riots at United States embassies in the Muslim world spread overnight to Yemen, and broke out again in Cairo. Also, the Associated Press might have found the real man behind the Innocence of Muslims film. If so, they have a surprise for most readers: he is not an Israeli Jew, but a Coptic Christian.

The latest riots at an American embassy broke out in Sanaa, capital of Yemen, overnight. Muslim militants climbed the wall, swarmed the compound, threw rocks, broke windows, set fire to car tires, and tore down the embassy sign. They also hauled down the American flag and flew the black Muslim banner of Al-Qaeda:

There is no God but Allah, and Mohammed is his prophet. 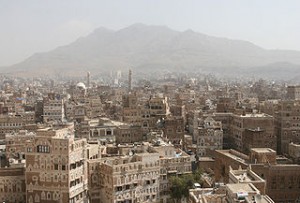 After forty-five minutes, Yemeni security troops drove them out. No one knows how many people were inside the embassy. As far as anyone knows, the rioters didn’t hurt anyone.

The Yemenis answered this riot differently from how the Egyptians handled theirs. In fact, the riots in Egypt are still raging. And in another sharp contrast with the Egyptian attitude, the present of Yemen called Washington to apologize for his countrymen.

Who made the anti-Muslim film?

As ever, the protesters (those who spoke to anyone) blamed the anti-Muslim film, Innocence of Muslims (or is the title Mohammed: the Movie?). Only a 14-minute trailer has come out, and that happened two months ago. Many US experts think that film was a cover story for an Al-Qaeda operation in Libya. The target: US Ambassador J. Christopher Stevens, who died yesterday.

The first reports gave the film director’s name as Sam Bacile. A man answering to that name said this about himself to reporters:

Late last night, the Bacile story started to unravel. The Huffington Post published this piece, which gave partial credit to the Associated Press. It names the producer of the film as Nakoula Basseley Nakoula. The authors of the piece suspect that Nakoula Basseley Nakoula and Sam Bacile are one and the same man. The man answering to the Nakoula name denies this.

Nakoula’s background is less than honorable: he was convicted of financial crimes.

Nakoula…pleaded no contest in 2010 to federal bank fraud charges in California[. He paid] more than $790,000 in restitution. He [served] 21 months in federal prison.

A judge also ordered him to stay off the Internet for five years.

According to court papers, he has used assumed names that sound like “Bacile” (Bah-SEAL) before. In any case, “Bacile” is not a legitimate Jewish name. No Jewish name would ever transliterate that way from the Hebrew alephbet.

The more relevant point: Nakoula Basseley Nakoula is not Jewish. He is a Coptic Christian.

This, then, explains why the 14-minute film trailer depicts persecution of Coptic Christians in Egypt. It does not depict persecution of, or terrorist attacks against, Jews. Beyond that, the trailer tells its story in a ham-handed, over-the-top way. It is cheap, amateurish polemic, not the kind of polished documentary that, for instance, Dinesh D’Souza recently produced. But everything the trailer does say, other sources have corroborated. That includes:

That the release of this film might start riots, might be plausible, except for one thing: the upload is two months old. If that film was so incendiary, why did no riots start then?

The Arabic-dubbed version came from Egyptian television, a government media organ. Whoever the filmmaker is, he never authorized that. But no one suggests that Egyptian television apologize for inciting riots and creating international incidents in three countries.

“In any case, “Bacile” is not a legitimate Jewish name. No Jewish name would ever transliterate that way from the Hebrew alephbet.”

You’re aware that many jews don’t have Hebrew names, right? Albert Einstein’s parents were jewish and his surname is German. So are many other “jewish” names; Zuckerman, Goldberg, Blumenthal… I had a jewish friend at school whose surname was Lee. That’s not Hebrew either.

“But no one suggests that Egyptian television apologize for inciting riots and creating international incidents in three countries.”

Well no. That’s because they didn’t make the film.

Or if they didn’t, the Muslim Brotherhood did, as part of a coordinated effort.

What?? Terry, look at your own article, would you? The two video clips you included both share footage and all the alleged clips from the film have the same (shoddy) production style. I certainly agree that Egyptian TV did the dubbing, but would subtitles really have been an improvement?

“Bacile” or whatever his name is made a deliberately inflammatory film and is now refusing to take responsibility. That responsibility includes a share of the blame for several American deaths.

Terry, you’re assuming a lot in saying that Egyptian media made this whole thing up. There is a lot of anti-Islam sentiment in the west, and lots of people make videos and upload them to YouTube. Anybody could probably find a dozen videos similar to this one just by surfing the internet for an hour.

That said, it doesn’t matter who made the video. In the free world people express their right of free speech and occasionally that means that other people get offended. But what civilized people do in that case is either complain or if they feel like being very extreme organize a peaceful protest. It is NEVER okay to kill people over something as minimal as this, and thats the issue the media should be focusing on.

Absolutely. However we know that certain religious crackpots do kill people over nonsense like this, so the idiots who make the films have the same sort of culpability as a man who opens a tiger cage does when a party of visiting schoolchildren subsequently get eaten. Yes, there is a right to free speech. However with rights come responsibilities, and the makers of this idiot film carry their share of the responsibility for the violence they knew it would provoke.

I support the right to own firearms. In exercising this right I also accept the responsibility to be competent in the use of the guns I own, to store them safely and to use them in a manner that doesn’t endanger the life of any innocent person. The right to free speech carries similar responsibilities, like it or not. It comes back to the old scenario of shouting “fire” in a crowded theatre. Yes, you have a right to do it, but unless there really is a fire you’re a culpable moron if you do.

Reasonable as far as it goes. However: we now learn that the “provocation” was a lot more complex than the Obama administration continues to represent.