The gold, silver, and stock markets weighed Barack Obama in the balances this week and found him lacking. Even the cold, hard professionals now agree: Barack Obama destroys value. Only gold and silver can save it now.

The prophet Daniel writes of a chilling scene at the court of King Neriglissar, or Belshazzar, of Babylonia. This Belshazzar gave a grand party for his court. He and his courtiers even drank from gold vessels from Solomon’s Temple. (Nebuchadnezzar the Great tore down this temple and carried away its vessels in 586 BC.) Suddenly everyone watched in shock as a disembodied hand wrote a cryptic message on the wall. In transliterated Persian, this reads:

No one present could figure out the message. So Belshazzar summoned Daniel, who had long had the respect of the Kings of Babylon since Nebuchadnezzar. Daniel laid it on the line:

God has numbered your kingdom, and finished it. [He has] weighed [you] in the balances and found [you] wanting. [Now he will] divide…your kingdom and [give it] to the Medes and the Persians.

That same evening, Belshazzar died in combat, when Cyrus the Great and his 62-year-old uncle Cyaxeres (“Darius the Mede”) captured Babylon and the empire for Persia.

This week, the gold and silver markets wrote on the wall. Today the stock market turned in the disastrous showing those markets told every thinking person to expect.

Key reversals in gold and silver 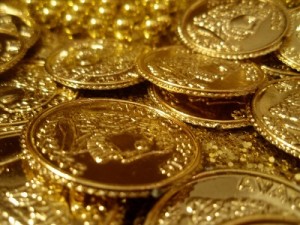 Today, gold and silver closed only slightly lower. But stocks closed 2 percent lower. (See also here.) The official reason: worry about Europe. But Europe shouldn’t be a worry. If it is, then after four years, Barack Obama has none to blame but himself. Not because Europe’s economy is a mess, but because any American has to worry about a thing like that. And why did gold and silver key-reverse up? Because everyone knows that Ben Bernanke will drop “helicopter loads of money” on the economy. Meaning he will print money and destroy its value.

This entry notes that someone said ahead of time that gold and silver prices would rise, and stock prices would fall. That’s what happened and is happening.

Stop mooning about not buying Tuesday or Monday at the lows and BUY. Sooner or later you have to take a risk, and the odds just don’t get [any] better than this.

Sanders then said this about other referenda that passed yesterday:

Colorado and Washington voted to legalize marijuana. I find that enlightening. Neither these states nor any others will challenge the federal tyranny on the police state or unconstitutional money or foreign wars or interference in the economy or the liberties of the citizen, or assassinations or torturing prisoners, but that smoking dope, now that’s another matter. We’ll fight the feds down to our last roach, Buddy! We believe in freedom, after all. Got to get that head right! Wonder what they do when the feds flex their muscles and withhold their highway funds and other subsidies? That’ll be fascinating.

Actually, what’s fascinating (because it defies common sense) is the dollar rising against other countries’ monies. That won’t last. Nor will it matter.

Why should gold and silver rise?

Gold and silver are commodities, things people can use. The usual use for gold is in jewelry. Silver finds many other uses, especially in electronics.

And gold and silver have usually risen, or fallen, with the price of another commodity: oil.

Gold and silver have always been good stores of value. (So has copper, but copper is far more common.) And in Hebrew and the Romance languages, the word for silver (Latin argentum) is the same as the word for money.

Judgment came even before Barack Obama won yesterday’s election. And in the judgment of those in the business of value, Barack Obama will destroy it. They won’t say so out loud. But their actions, and their trades, speak louder than their words. Now they’re saying that commerce and industry will stagnate, or even collapse.

And the merchants of the earth weep and mourn over her, because no one buys their cargoes any more – cargoes of gold and silver and precious stones and pearls and [other luxury goods] [Revelation 18:11-12 and following]

Related Topics:biblegoldsilverstore of value
Up Next