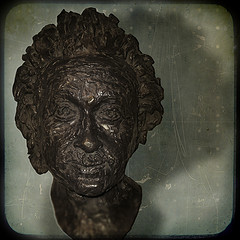 As the holidays and families draw near, so does the fiscal cliff. The term is as ominous as the numerous predictions that accompany it. The debt ceiling is expected to arrive by the end of February. This will have a deleterious effect on a host of indicators – from unemployment rates to an economically ravaged military.

Fiscal Cliff 2011 and the S&P downgrade

How do you define insanity?

Albert Einstein, in a portrait bust he sculpted himself. Photo: User “Caroline”) (“The hills are alive”)/Flickr, CC BY 2.0 Generic License.

Albert Einstein once defined insanity as:

doing the same thing over and over again and expecting different results.

Sure, it is easy to blame the incompetence of the legislature for the economic debacles we are experiencing in America. But the electorate is every bit as responsible for keeping the same people in office as our legislators are for putting us in this untenable situation. Worse – the electorate looks to the same men and women who created this crisis to fix the crisis they created. It seems to me that Einstein was right – we are a bit insane – or at least naïve to a fault.

Our naïveté and the blarney of well-funded political cabals have nearly destroyed one of the most prosperous and free nations the world has ever known. It’s often been said that the road to hell is paved with good intentions. Utopian ideas and stealing the fruits of the labor of others in the name of social justice are the good intentions that have paved the road America is currently traversing. We have been forewarned that this road ends with a cliff (And not merely a fiscal cliff, but a more general, and deeper, cliff.) Unless God Himself steps in to save us from ourselves, I fear we will march lockstep together over the cliff of no return – all the while singing Kumbaya and telling ourselves how great we are. Unfortunately, I don’t believe God will intervene unless our nation repents of its many sins of indulgence and immorality. And more unfortunately, the vast majority of Americans think these sins are virtues, which makes repentance highly unlikely.

A call to repent

Blame who you will for the impending doom – surely there is enough blame to go around. But while you’re at it, take a look in the mirror and ask the person looking back if they stood on the sidelines while others sounded the alarm. If the answer is “yes”, then stop your complaining and start doing some old-fashioned repentance. If you don’t know what you need to repent of, I suggest you take a look at the 10 Commandments. And who knows, maybe God will once again have mercy on America. I can only hope.

Editor’s note: the ancient Greek word for repent is metanoeo. Which means: I change my mind. Good advice when Paul of Tarsus gave it; better advice today.

Gold and silver: thumbs down on Obama

Which is the lesser of two evils? Open blatant presentation, or stealthy devious clever presentation??

Which is the lessor of two evils? Open blatant presentation, or stealthy devious clever presentation??