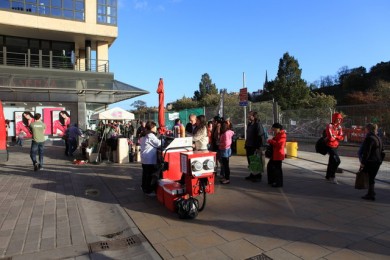 A local hot dog guy in Lansing, MI is the new face of innocence in the Michigan labor riots. When goons took down a tent with people in it, he was inside. Not only that, but they wrecked his equipment and spilled all his hot dogs and toppings. But that one act made the city, or at least those who worked downtown, feel shame.

The hot dog guy and the goons

His name is Clinton Tarver. He has served hot dogs to hungry workers in downtown Lansing for five years. He seems to have stayed away from politics, so he wouldn’t give offense. But that wouldn’t stop him from booking events with other political people. Americans for Prosperity booked him to serve hot dogs in their tent on Tuesday. Naturally he accepted.

And for a few frightening minutes on that day, he might have thought he shouldn’t have.

He told his story to local radio hostess Dana Loesch later that day. Two men came into the tent and showed him tickets to get hot dogs. So he gave them their hot dogs. Ten minutes later, those two were back, overturning coffee urns at the table next to him. One man wore a ski mask, the other a mask Tarver thought was a devil’s mask. (By another account, the mask was the well-known cartoon image of Gunpowder Plotter Guy Fawkes.)And within an hour, the tent was down around him.

I was trying to salvage some of my stuff but my friend, he works at the Capitol, he said, “Don’t worry about that. You gotta get out of there.” So, I crawled out of the tent as they cut it. My tables were being spilled and stepped on. It was all just destroyed. I just couldn’t believe what I was hearing and seeing.

He came back later to salvage what he could. That’s when some goons told him he was on the wrong side. They even called him “Uncle Tom,” and worse.

After it was over… 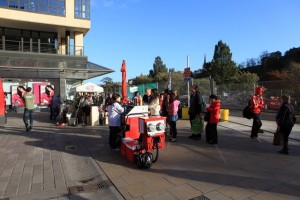 Clint Tarver lost $500 worth of equipment that day, in addition to the spilled hot dogs, ketchup, mustard, relish, and so on. As of 5:00 that afternoon (Lansing time), Tarver did not swear out any complaints with the police. (He probably wouldn’t have known whom to complain against. The Speaker of the Michigan House told Fox News that half the goons rode in on buses from out-of-State.)

But the local people in Lansing did not let the matter rest. An employee of a Republican State House member set up a fund-raising site. She said this about the events, after talking to “Mrs. Hot Dog Guy”:

I have spoken with Linda Lee, Clint’s wife. She says he is absolutely overwhelmed with our support, even more so than by the events of yesterday. I would like to clarify the events, however. Clint hired as a caterer for the AFP tent which was torn down. He was much more concerned about the others, and particularly helped to get the women out of the tent. It was when he returned to gather his equipment that the taunts and racial slurs began. He says the working people did not respect the working man. He was not there to be political; he was just there to serve. This is the Clint we know and love. Please, let’s respect him and leave our political opinions out of this. This is about our support for Clint.

She first sought to raise $2000 to recover the hot dog guy’s losses. Within hours, the site had already raised double that. So she raised her goal to $5000. At the time of this writing, her site has raised more than $27,000.  Money has come in, in amounts varying from $5 to $100. Gifts are still flowing in, though everyone knows that by now the hot dog guy can easily buy a full-sized hot dog truck, or even buy a fleet of them, hire drivers, and cater to many more events. (Some donors urge him to do exactly that!) The Lansing State Journal says people on both sides of the right-to-work debate have given money to Mr. Tarver.

There isn’t much the two sides of the right-to-work debate agree on today, but they may have found at least one common bond.

You don’t mess with the hot dog guy.

The comments on the site, and the notes that donors have left, bear this out.

It was one matter when people thought the only ones to get hurt were (as they supposed) the hired underlings of two rich activists with, according to their detractors, more money than compassion. It was quite another when the local hot dog guy turned out to be another target. (For the record, Clint Tarver did not bill Americans for Prosperity for the event. He said later they had enough to worry about, including replacing their tent. The goons literally cut it up for trophies.)

And if this episode makes more people think before they lash out and hurt innocent people, then it will help more than just one humble hot dog guy.

Obama 2013 Inaugural Speech – The Violable Vision of the Un-vetted