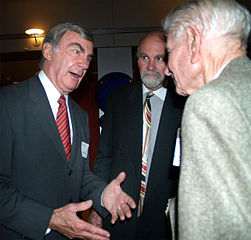 The rogues’ gallery of bloody leftist revolutionaries is a long one. It begins with Maximilien Robespierre and goes on with Vladimir I. Lenin, Josef Stalin, and Mao Zedong (or Mao Tse-tung). Last weekend it gained a new member: Sam Donaldson of ABC-TV. But Sam Donaldson made a mistake. He said out loud what the leftists knew they must keep quiet until literally nothing can stop them: they have taken America over.

The minorities re-elected president Obama, but I’m going with Katty. It’s the Tea Party and thinking of the Tea Party and people like that that are driving the Republicans out of contention as a national party. You cannot win nationally if you don’t know something about the way the country’s changed, and the Tea Party seems to think the country can go back 25 or 30 years. The greatest slogan that I hated during this last campaign was “We want to take back our country.” Guys, it’s not your country anymore – it’s our country and you’re part of it, but that thinking is going to defeat Republicans nationally if they don’t get rid of it.

It’s not your country anymore – it’s our country.

What exactly does that mean?

By you and your, Sam Donaldson obviously means the Tea Party and all who support it. But who is we and our? He might claim that we and our mean everybody, left and right together. But left and right can no more mix than can oil and water. Anyone with any sense knows that.

So we and our mean the left. And they mean those who

believe that they can vote for prosperity by wealth confiscation and believe that it’s their moral right to do so.

Sam Donaldson has always believed that the “have-nots” have the moral right to vote to confiscate the wealth of others.

He has a tiger by the tail.

Leftist revolutions almost always eat their own. Maximilien Robespierre found that out the hard way. Stalin and Mao would not live to see it happen to them, but it did. The problem: many innocent people had to suffer for it. DeMar suggested the culture is still civil (I don’t agree with that), but that won’t last. When that goes, the revolution will eat Sam Donaldson, too.

Related Topics:electionmediapoliticiansTea Party
Up Next