Has Officer Barbrady taken over the White House press corps, as well as the Press Office? So it seems, as the modern American press looks the other way while a de facto President moves to make himself Emperor right under their noses.

Who is Officer Barbrady? 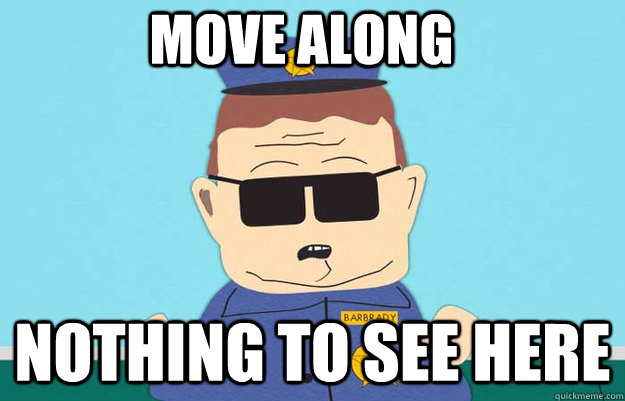 First, let me introduce Officer Barbrady. Most readers here probably do not watch South Park. If they did, they might know that Officer Barbrady is the only police officer in South Park. As strange as it might seem, when he retired, the city nearly fell apart. But what did Officer Barbrady do to keep the city together? Nothing, except to make a lot of dumb show. The “dumb show” convinced the people that he really kept order in South Park. But mostly he would strut about a crime scene, look important, and say,

All right, people! Nothing to see here! Move on!

At least, that’s how Officer Barbrady started out. But Trey Parker and Matt Stone never imagined how life would imitate their art. (Or did they?)

Barack Obama wants to be an emperor. And he is doing everything he can to make sure of it. That should be the kind of story a reporter would kill for. (It certainly was when Richard M. Nixon was President.) But the press has nothing to say, except:

Obama proposes universal pre-school for all. Fox News at least tries to find something to say about that plan, and focuses on how much it will cost. Even that is not the real story. The real story is what this program will be. It will take every child in the country away from home for eight hours a day, starting even earlier in their young lives. Maybe another teacher will lead them in song:

And all the press can do is behave like Officer Barbrady:

If you need any further proof, watch as Attorney General Eric Holder tells people they have “no fundamental right to home-school.” He even tried to stop a German family from refugee-ing to America to home-school. And from the mainstream press? Not a word, except:

Of course, Eric Holder is too busy to look closely when a school district blatantly discriminates. It’s all right to do that, so long as the target is white. And in this case, a member of the mainstream media puts the rest to shame: the CBS station in Denver, Colorado picked up on it when a principal in Aurora, Colorado kept white students out of an after-school program. But from the rest of the press?

Actually, this same Eric Holder ran guns into Mexico, from north and south, to game the statistics on “gringo guns spilling Mexican blood.” And the mainstream press has never said a word, other than

Do we now execute without trial?

Overseas, President Obama summarily executes Americans (and their minor sons) abroad, far removed from anything that even looks like a battlefield. His fellow partisans in the Senate pretend to object. But they then propose a secret Star Chamber to sign such death warrants. As if that will satisfy any of the requirements of Article III, Section 3, or Amendments V and VI. In case anyone has forgotten, those passages guarantee that even the worst kind of traitor deserves a fair, speedy, and public trial. A trial, not an instant warrant for execution without trial. Judge Andrew Napolitano explains here, far more eloquently than can I. But the rest of the press? Officer Barbrady, as “Cub Reporter Chris Barbrady,” says:

Not everyone is “moving on.” Companies that make guns now say that if ordinary citizens can’t buy their product in any particular place, those companies won’t sell to the cops, either. Olympic Arms says so on its Facebook page. (And very eloquently, too, not only to New York State but to the Fraternal Order of Police, too.) Does the press cover that? No. And the organization whose very name is

(Nothing to see here) Move on(.org)

puts out someone who says he defends the Second Amendment, but then proceeds to trash one of its more consistent defenders. And the rest of the press, like Officer Barbrady, says

When even Barack Obama’s most ardent supporters now hear the hollow crack of broken promises, while the mainstream media keep silent, you know something is wrong. FireDogLake is one of many outfits that helped elect Barack Obama. Now at least one man there wants to take his skin off over the drone warfare program. Especially when Barack Obama dares tell the world,

This is the most transparent administration in history and I can document how that is the case. Everything from every visitor that comes into the White House is now part of the public record – that’s something that we changed. Just about every law that we pass, every law that we implement, we put online for everybody to see.

Beside the point, Officer Barbrady – excuse me, President Barbrady. You have just told the people,

We’re not interested, just now, in visitor logs to the White House. (And if we were, we could show that’s a lie, too, as Kevin Gosztola said once before.) We’re interested in why you execute people without trial. And

won’t cut it anymore. Worse than that: has Obama any idea how chilling that sounds? It sounds very much like a scene from a 1984 miniseries (V: The Final Battle). In it, a combined human/extraterrestrial Special Weapons and Tactical team spirits away two “suspects” after gunning them down. A bullhorn-carrying officer shouts,

Stand back! Clear the area! This is police business!

Or as Officer Barbrady would say:

Sorry, Officer Barbrady. There very much is something to see here, there, and everywhere. And we will not move on. Not this time. And maybe never again.

Editor’s note: neither Trey Parker nor Matt Stone conversed with CNAV at all. Neither they nor their production company has ever endorsed this site. But if they value their liberty to go on producing, maybe they should.

Bullies in the Newsroom

Drone warfare and the media

[…] someone to do a perp walk. And…nothing happened. Nothing, that is, except for the Officers Barbrady to come out say, in […]

[…] the globalists tell us the UN is. Nothing more than that, they say. Or in the immortal words of Officer Barbrady of South Park […]