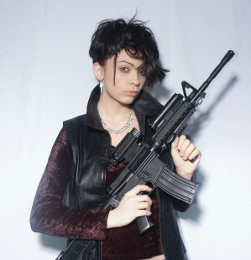 Liberal legislators are getting desperate in pushing the gun control argument. Now they are flying their true colors, and showing how little regard they have for a key constituent group: women.

Gun control and its poor substitutes

State Representative Joe Salazar (D-Thornton, Colorado) introduced a bill to forbid anyone having a permit to carry a concealed weapon to carry that weapon on a college campus. This, of course, is a key gun control step: declare a spot where you might spend most of your time throughout the year a “gun-free zone.”

Salazar understands one thing. If you tell people to turn in their guns, or leave them behind, you have to tell them what to do instead. The problem: Joe Salazar’s substitutes for guns are worse than absurd. WND published this quote:

Rep. Salazar says women may not know when they’re being raped.

Today Salazar left this lame apology, according to Politico.com:

I’m sorry if I offended anyone. That was absolutely not my intention. We were having a public policy debate on whether or not guns makes people safer on campus. I don’t believe they do. That was the point I was trying to make. If anyone thinks I’m not sensitive to the dangers women face, they’re wrong. I am a husband and father of two beautiful girls, and I’ve spent the last decade defending women’s rights as a civil rights attorney. Again, I’m deeply sorry if I offended anyone with my comments.

Well, I’m sorry, too, Señor Salazar. But plumping for affirmative action in hiring, promotion, admissions, and so on, is beside the point. Because it is not worth a Continental to a distraught woman having to tell a horrible story to a police officer.

Needless to say, the Republican caucus in the Colorado State House did not accept that apology.

A woman cradles a Bushmaster AR-15. Law enforcement might be a lot easier if would-be criminals had to wonder whether their targets were as well-armed as this. Photo: Cyber-Stock Deviant Art, CC BY 3.0 Unported License.

The real attitude is even more extreme: no person ever has the right to defend himself, or anyone else, with a deadly weapon. Gun control is only the start. It’s an easy start, because guns can act at long range. You don’t always get up close and personal with an enemy in a gunfight, as you would in a knife fight, or hand-to-hand.

But those who call for gun control, only pretend to care about safety. The best thing about the gun control debate today is that now we are having a straight, true talk about how best to stay safe from crime. (Or from enemy invasion, or domestic tyranny.) Salazar should know, and wants to hide, that police have no affirmative duty to protect you. If a woman reaches a call box, the best that might happen is that a police dispatcher will hear dwindling moans as a man seizes a woman, clamps a hand over her mouth, and carries her off. The police then drive up to the call box and find only a dangling telephone.

But suppose the woman has a gun. Then, chances are, nothing will happen. She will not “pop a round at somebody.” She might brandish the gun, and anyone stalking her will probably slink away. Or if he comes out and threatens her, she’ll pull the gun and order him away. Chances are he will obey.

And if he does not? Well, then, what happens next will be his loss, not hers.

But you won’t hear that from the gun control crew. Instead they conjure up lurid visions of innocent men lying dead on the quadrangle, victims of the ultimate feminist fury – or of simple carelessness. Nor do they face this hard reality: criminals never obey gun control laws.

I lived four years on a college campus. I saw first hand the cold war of the sexes that rages, especially on undergraduate campuses. When women can’t protect themselves, they start to feel that all men, from fellow students to professors and administrators, conspire to keep them in fear. During a postgraduate experience, I got close enough to the undergraduate community to learn that, if anything, that cold war raged even more fiercely. (Once I took the part of a “student adviser” in a discipline hearing.)

Now suppose the women on the campus had guns, or something more substantial than call boxes and whistles. No bloodbath would result. Instead, peace would reign. The women would be supremely confident that they could “handle” any man who got out of line. The men would learn respect, and show it. Relations between the sexes would be very cordial – as they tend to be within the “gun culture.”

Of ordinary citizens and governments

Robert A. Heinlein said it best:

An armed society is a polite society. Manners are good when one may have to back up his acts with his life.

And they already are. Lame apologies for gun control are not the worst we see today. Infowars now reports that a favorite supplier of practice targets for police now produces a “no more hesitation” line. These targets look for all the world like ordinary citizens reaching for a gun to defend themselves – against the police. (The article has links to the sites, to back up what they say. Sometimes those sites are too busy to load.)

Now we can explain a Joe Salazar. He does not care about women’s safety on campus. He’s afraid of anyone out of government. So instead of a cold war of the sexes on campus, we are in a cold war between the government and the governed. Where might that lead?

On a more serious note, it’s clear that you really haven’t thought through the implications of the “polite armed society” you imagine would be the cure for many acts of violence. Women would carry guns, but so would potential attackers, all completely legal as long as they’re not caught in the act. So it doesn’t matter if you have your gun in your bag or even a holster – if someone is able to pull a loaded gun on you first, safety off, your gun isn’t going to deter anything.

When everyone has a gun it’s not the ones with a gun who are safe – it’s the fastest ones to draw. A gun in this world is only useful if you walk around holding it, safety off, ready to use it preemptively on anyone you think might be a threat. This encourages paranoia, not peace of mind, and it only provides security theater, not security.

Don’t get me wrong – if someone is absolutely convinced that they need to carry a gun to be safe, they should have the right to do so if they’re properly trained and the gun is registered. Likewise, public and private institutions have the right to declare their properties to be gun-free zones, and no one is forced to go there if they consider that an unreasonable restriction.

There are less extreme ways to increase safety for women in a real sense – here are just three as an example:

– Legalize the concealed carry of pepper spray & tasers. They have much of the deterrent effect you get from guns, but are less likely to lead to accidental deaths. If they’re lost or stolen they aren’t putting lethal force in to the hands of anyone else, either.

– Provide free, mandatory self-defense training for all incoming students. One of my karate teachers holds classes like this, and the key benefit is that it teaches a true self-defense mindset – the awareness and observation skills to avoid being caught by surprise, and how to stay composed & effective if you are. Carrying a gun is no substitute for this kind of training – if anything, it provides a false sense of confidence, and in an actual attack an untrained gun owner is as much a threat to themselves & others as the attacker.

– Pass a law that carries severe, mandatory jail sentences for anyone using a gun in a crime. I’ve always been amazed that “three strikes” laws can send people to jail for years over non-violent offenses, but if you pull a gun in an attempted robbery as your first-time offense you can be out on parole in a relatively short time. The best way to support lawful gun use is to establish that unlawful gun use will put you away for a decade or more, with no chance of parole.

Finally, you seem pretty fixated on the idea that the police, military and other government forms of law enforcement are enemies of freedom-loving Americans. I’ve always thought of them as freedom-loving Americans who happened to choose those careers. I don’t expect you to stop seeing nefarious intent in everything our governments do, but at least I can offer an alternate take on your speculation. Buying targets for a shooting range that represent different types of people is sensible when you may come up against a wide range of people trying to shoot you. School shootings like Columbine were done by kids, and you have to be able to identify the kids with the guns from the kids being assaulted in a split second. I saw the picture of the older white man with a rifle on the website you linked to, and I thought of Jimmy Lee Dykes, the loner who shot a bus driver last month and held a child hostage in a bunker for days, until he was shot in a raid when he became too unstable.

I could come up with other examples, but there’s one other basic point to be made. Sometimes the purpose of flipping up a target like a pregnant woman or a child with a gun on a shooting range is to train shooters when NOT to fire – to see the person, not the gun, and act accordingly. If your only targets are bad guys in ski masks, you can never learn this skill. The point is that reasonable people can find sensible reasons to buy these targets, but your distrust of authority is so strong that you only consider the sinister. That does a lot of good men and women in uniform a disservice.