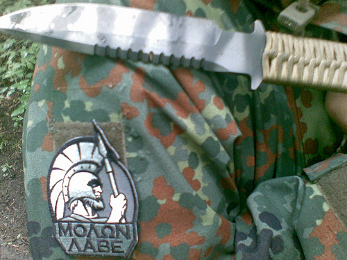 The federal government, with several State governments to help them, want more than gun control. They want to confiscate all guns. Inside information, and what they say publicly, prove this.

The inside information comes from the National Institute of Justice. That is the research arm of the US Department of Justice. So it is the federal government’s think tank on all things law-enforcement.

A few days into the new year, the NIJ studied the problem of gun control. Greg Ridgeway, PhD, the deputy director, signed his name to this white paper. Notice the Web address for that white paper: http://nraila.org/. That’s the National Rifle Association’s Institute for Legislative Action. They are a think tank for those who want to protect their right to keep and bear arms. Someone at NRA-ILA found out about the white paper and linked to it.

The paper, “Summary of Select Firearm Violence Prevention Strategies,” admits that many gun control measures that the left touts as “reasonable” would never work. Among other things, Dr. Ridgeway admits that gun buybacks don’t work, not the way most authorities run them. They’re too small, typically don’t gather in the kind of gun one uses to murder someone, and don’t stop a determined killer from getting another gun. Dr. Ridgeway discussed the Australian Gun Buyback of 1997. His finding: it removed the risk of another Aurora, or another Newtown. But it did not make murder in general any less likely. This part that Ridgeway admitted, really hurts the gun control case:

One study (Leigh & Neill 2010) has proven confusing in that its abstract suggests that Australia’s gun buyback reduced firearm homicide rates by 80%, but the body of the report finds no effect. Others (Reuter & Mouzas 2003) have used the same data and also found no effect on crime although they also noted that mass shootings appear to have disappeared in Australia. A third study (Chapman et al 2006) using Australian data from 1979 to 2003 shows that the firearm homicide rate was already declining prior to the firearm reforms and that there is no evidence that the new legislation accelerated the declines. This remains true when data through 2007 are added to the analysis (conducted by G. Ridgeway on 1/3/2013 at NIJ).

Zounds! Did Leigh & Neill lie in their abstract? But of course. That’s hardly new. After all, consider this line:

I’ve just completed Mike’s Nature trick of adding in the real temps to each series for the last 20 years (ie from 1981 onwards) and from 1961 for Keith’s to hide the decline.

But Ridgeway admits much more than this. He admits also:

The most stunning thing Ridgeway admits: an assault weapons ban would not work at all, unless the government also laid on a massive and mandatory buyback to which no one would be exempt. That means only one thing: make people turn in their guns.

Chris Cox of NRA-ILA explains this in Clip One (see below)..

Gun control – what they say and do 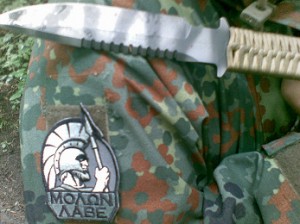 “Self-portrait with Strider and patch.” The Strider is a brand of knife that survivalists favor. Photo credit: Thomas Widhalm, CC BY-SA 2.0 Generic License

A good-hearted government might ask someone to study the issue as Dr. Ridgeway did. But it would then decide that gun control made zero sense. It would tell people simply to arm themselves to protect themselves from mayhem. (Like Dean Winters in the Allstate ads; see Clip Two.) And it certainly wouldn’t put in place the kinds of gun control policies that Dr. Ridgeway said wouldn’t work.

Then why did Senator Diane Feinstein (D-CA) introduce S. 150, the renewal of the “assault weapons” ban? Why did legislators in Missouri introduce a bill giving some gun owners ninety days to turn in their guns or somehow get them out of Missouri? (How, legally?) Why did Colorado’s State House pass several measures like the ones Ridgeway condemns? (Play Clip Three.)

For answer, look at what those politicians have said over about twenty years. Read this article from Anthony Martin at examiner.com. It indirectly quotes de facto President Barack Obama:

I don’t believe anybody should own guns.

Play Clips Four, Five, Six, and Seven below. Hear Governor Andrew Cuomo (D-NY), Senator Feinstein, Mayor Ed Koch (D-NY), and Attorney General Eric Holder, say what they think of the Second Amendment. Hint: not much. In fact, they mention it only to condemn it! To them, gun control means that only LEO’s or active-duty military should carry guns. (And sometimes with their bolts taken out, as David Codrea first showed.)

And then read these two articles that quote Garry McCarthy, Chief of the Chicago Police Department. What does he say? That gun owners who call their Congress members and legislators, or give money to Second Amendment advocates, are guilty of corruption. No, he didn’t say he was investigating any gun owners for corrupt dealings in other contexts. He said those gun owners were doing a corrupt thing even to reach out to their representatives.

And this shows how a gun control advocate really thinks. No one can reasonably argue against him. Anyone who disagrees with him, is asking the government for a favor the government should never grant to anyone. Unless that someone is a member of the government, or a special friend.

Stop the presses! David Codrea published this a few minutes ago. A gun control advocate named Lee Coleman, who once ran for the Oregon State House, lost his temper and stormed out of an interview. Play Clip Eight. (WARNING: Mr. Coleman uses language that, to paraphrase Rex Harrison, would make a sailor blush. Parental judgment and discretion are advised.)

The leaders of the gun control movement want your guns. They don’t believe you, or anyone else but them, should have guns. Follow the links. Play the clips. Ask yourself whether you want to be free, or instead be both slave and slave driver.

And if you want to be free, take my advice. Arm yourself to protect yourself better from mayhem.

Elena Kagan, The Fox in the Chicken Coop

There’s a tired, ineffective argument underpinning this whole essay – “laws that restrict anything are pointless, because criminals ignore the law”.

Then why have laws like that in the first place? We could free up a lot of the criminal justice system’s resources and let people keep the peace through street justice.

If that were the case, we might as well let Iran and North Korea build as many nukes as they want, and sell them to anyone who wants them, Al Qaeda included. After all, we have more nukes and ours are more deadly, so an armed world will be a polite world, right?

What we need is to find a middle-ground of reason where responsible people can have guns as long as they get trained to use them and register them, but this is accompanied by a limit on how much killing power is appropriate for civilians to walk around with. We don’t let people walk around with grenades, pipe bombs or vials of sarin for self-defense, and we can find a way to draw a red line on personal killing power that applies to guns too. Otherwise you just wind up with a civilian arms race – a handgun is useless when the other guy has an assault rifle, so are we all supposed to walk around with assault rifles to restore balance?

The sensible answer is to define three limits – the number of rounds per minute a gun can shoot, the capacity before reloading is necessary, and the nature of the bullets fired (hollow point, armor piercing, etc.). Reasonable people can find common ground on acceptable limits for each, and then citizens could buy, make or own anything imaginable as long as it stays within those limits.

That’s not an “infringement” on a right – it’s a circuit-breaker to keep one person from killing dozens or more in the seconds it would take for bystanders to respond, even if they were armed. It’s the difference between weapons of self-defense, and weapons of mass destruction.

This even addresses the individuals who want to fabricate guns and gun parts to do things they can find in the marketplace. You can’t pretend to control innovation, but we can define the punishment for innovating illegal capabilities.

In this scenario, there isn’t even a need to take away anyone’s guns. If you bought a Bushmaster and it’s declared illegal, you can turn it in under amnesty and get any number of legal firearms to replace it, or you can keep it hidden in your home and take your chances. Just like a batch of crystal meth you bought or brewed, though, there will be consequences if this illegal weapon is found, and they should be severe. The problem in Newtown wasn’t that a Bushmaster was kept in the house where Nancy Lanza lived; it was that it also happened to be kept in the house where Adam Lanza lived. If she had only been allowed to keep pistols, rifles and shotguns in her home, the death toll at Sandy Hook may have been much lower.

So if you and people of like mind want to walk around wearing “Molon Labe” patches while you hide your stash of now-illegal firearms, feel free – just be prepared to face the consequences of the law if you’re caught.

And don’t counter by saying that you don’t have to obey gun-control laws if you decide they’re unjust. The Supreme Court has never ruled restrictions on certain types of firearms to be unconstitutional, just restrictions on being able to have a gun at all. If you cannot accept the right of Congress to make a law and the Supreme Court to determine its constitutionality, then it’s time to find a different country because there is no “taking America back” to a time that didn’t apply.

Correct; it’s that it was unsecured. I personally have no problem with keeping a military rifle locked up in a combination-lock cabinet rag bolted to a load bearing wall. If Nancy Lanza had had the wit to do the same she (and a whole bunch of kids) would still be alive.

[…] a bad guy with a gun, is you with a gun. She also understands that gun control is the first step to confiscation. And finally, she understands what Benjamin Franklin said about trading liberty for safety. And […]