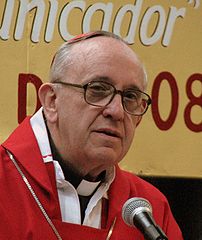 We have a Pope: Pope Francis I, a/k/a Jorge Mario Cardinal Bergoglio, former Archbishop of Buenos Aires. The white smoke billowed forth from the Sistine Chapel about four hours ago at time of posting. The new Pope Francis could be the last. Whether he is or not, he is probably the best that the College of Cardinals could have chosen.

Who is Pope Francis?

Jorge Mario Bergoglio was born on 17 December 1936, in Buenos Aires. (See his ever-changing bio on Wikipedia.) His father was an Italian immigrant who came to Argentina to work on its railroads. He has four brothers and sisters.

He joined the Society of Jesus in 1958 and became a priest 11 years later. On 28 February 1998 he became Archbishop of Argentina. Pope John Paul II made him a cardinal three years later.

Humility seems to be Jorge Bergoglio’s middle name. He refused to live in the official archbishop’s residence, and instead lived in a simple “flat” in downtown Buenos Aires. He refused the chauffeured limousine the Church normally gives to men of his rank, and took the city bus to his job. He is also one of the few men of his executive rank who knows how to cook.

Now that he’s the Pope (see here, here, here, and here), he’ll have to take on the privileged – and some might say imprisoning – lifestyle of his predecessors. But this evening, as he stood on the ceremonial balcony overlooking St. Peter’s Square, he showed he has lost none of his “common touch.” He asked the Cardinals to call him Pope Francis, after Francis of Assisi, the name that means humility (and love of animals). He asked the throngs of well-wishers to pray for him. In this he recalled another world leader who asked the same favor:

Boys, if you ever pray, pray for me now. I don’t know whether you fellows ever had a load of hay fall on you. But when they told me yesterday what had happened, I felt like the moon, the stars and all the planets had fallen on me. I’ve got the most terribly responsible job a man ever had.

One can speculate, but rarely does that do any good. But Pope Francis has left some interesting material to speculate on:

This last should surprise no one. If you believe, as Pope Francis does, that sin is a losing game, of course you will protest against it. But when a man is already suffering the consequences of sin, the time for judgment is past. Now’s the time to show compassion, and to say in effect:

I warned you this would happen to you. Now that it has, I’ll help any way I can.

Two more things from Scripture might explain the attitude of Pope Francis toward those patients, and anyone else who might suffer as they do. First, Jesus Christ did not hesitate to wash the feet of His closest companions, the Apostles. Peter of Galilee protested, but Jesus insisted upon it:

If I do not wash you, you have no part with Me.

Second, The Law never saves anybody. The Law tells you only how far you fall short – and everyone falls short. Pope Francis seems to understand that.

What about the Malachy prophecy?

Malachy of Armagh, so legend has it, received a private vision while in Rome on an errand to Pope Innocent II. (The Roman Catholic Church does not accept Malachy’s vision as authentic.) He wrote down 111 pithy Latin phrases that seem to describe every Pope, and even every Antipope, beginning with Innocent’s immediate successor and ending with the now-resigned Benedict XVI.

He finishes with this:

In extreme persecution (or “the last persecution”?), in the seat of the Roman Church shall sit Peter the Roman [or simply “The Roman Rock”], who will feed the sheep through many tribulations. After this, the city of seven hills will be destroyed, and the formidable Judge will judge his people. The End.

That sentence does not say the last Pope needs to call himself Peter, after Peter of Galilee. (No Pope or Antipope ever did that.) It does not even say the Rock of Rome necessarily follows directly the “Glory of the Olive” that precedes him. It does suggest the last Pope will need to be “a rock” to cope with the most severe crisis the Catholic Church will ever face.

Is Pope Francis the man to do it? He could be. He could also be putting on an act, as the so-called “antichrist” will do. But if he’s acting, he’s been “acting” all his life. So he is most likely genuine.

The world will soon see how genuine Pope Francis truly is.

[…] ~ "We have a Pope: Pope Francis, who took the name of Francis of Assissi. He is probably just the Pope the Church needs in this trying time" ~ `Who is Pope Francis?…….read on…. Pope Francis takes office | Conservative News and Views […]

Letter from God – Popes and Protestants | Conservative News and Views