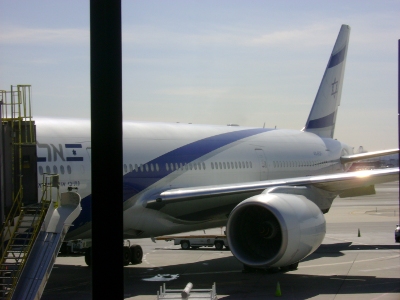 The Transportation Security Administration (TSA) is America’s first line of defense against another Nine-eleven Incident, or worse. At least, that’s what they want you to think. But an ex-TSA screener at Newark Liberty Airport now says that his job is a joke, and the TSA makes almost no difference in airline flight safety.

A TSA screener speaks out

The ex-TSA screener at Newark Liberty won’t give his name. But he gave his story to The New York Post last night. He leads with the worst indictment of all:

A lot of what we do is make-believe.

Then he gives an example: a “pat down” that lasts all of ten seconds, just to satisfy the cameras.

That, he says, is typical. Of course, the non-typical incident that makes the news, involves embarrassing or humiliating a child or adult woman passenger. Or stealing their valuables right off the security line.

But this TSA screener says the typical screening is fearfully lax. And why?

Most TSA supervisors are too daft to actually supervise.

You don’t need a high-school diploma or GED to work as a security screener.

These are the employees who could never keep a job in the private sector. I wouldn’t trust them to walk my dog.

The anonymous TSA screener then mentioned this incident. (The report comes from KLTV-7, which cites The New York Post.) A TSA inspector carrying a phony bomb in his pants got through two checkpoints, and no one found out about the fake bomb until he was at the gate. And this happened at Newark Liberty Airport. Says the TSA screener to the Post:

That’s not even news to anyone who works there. It happens all the time.

So why haven’t we lost a plane yet?

Our feeling is nothing’s happened because they haven’t wanted it to happen. We’re not any big deterrent. It’s all for show.

So what are the TSA screeners doing there?

Most TSA screeners know their job is a complete joke. Their goal is to use this as a stepping stone to another government agency.

Most, but not all. The TSA screener goes on:

A small number of screeners are delusional zealots who believe they’re keeping America safe by taking your snow globe, your 2-inch pocket knife, your 4-ounce bottle of shampoo and performing invasive pat-downs on your kids.

Those are the ones we have to thank for the atrocities that make the national news.

The Israelis know how to do things right 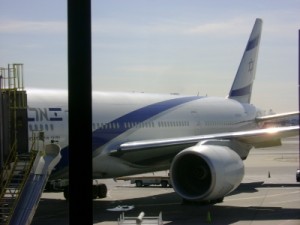 An El Al Boeing 777 waits to load before take-off. El Al Israel airlines handles its own security. The TSA now wants to copy that model. Do they even know how?. Photo: CNAV

Two years ago your Examiner traveled to Israel – from Newark Liberty to David Ben-Gurion Airport in Lod, the one serving Tel Aviv and Jaffa. Naturally, I flew El Al. Nattily dressed, scrupulously polite officers “grilled” every passenger, including this one. (Those officers dress as civilians, but they are all veterans of the Israel Defense Forces.)

The routine was new to me, and that confused me. Worse yet, I came to the airport separately from my tour group. They were to drive in from Pittsburgh, Pennsylvania and meet me there. But I didn’t wait. So the story I told must have sounded weird. The El Al people went over my story with me – twice – to make sure I could keep it straight. But in the end, they decided I was on the level and let me through.

I felt a lot safer on that El Al flight than I’d ever felt in the air before. The El Al people were looking for a guilty conscience, or someone nervously trying to fool them. They look at the person, and how he behaves, and not so much at what he carries. In contrast, the TSA screeners treated me in a perfunctory way. The only reason I had to feel safe was the flight I was getting on. Because someone took the trouble to look at how we all behaved, but did not offend my dignity or anyone else’s.

Coming back to Newark Liberty from Ben-Gurion was much the same. They did one thing more, though: they searched my checked bag. They had to – because in the ten days I spent in Israel I bought a lot of souvenirs, mostly books. They checked each one for explosive chemicals, then said they were done. The whole process took five minutes.

But David Ben-Gurion Airport is a safe airport to leave from, for one reason: El Al handle security for the whole airport. Nothing gets past them. But they don’t put you through a whole-body scanner and produce a semi-nude outline for anyone to laugh at. They decided long ago that they would not do anything undignified, for them or for you.

And El Al hasn’t lost a flight. Ever. The one time they came close was during the Dawson’s Field affair. The captain on that flight foiled them: he threw his plane into a steep, straight dive. (See this account on Wikipedia.) More to the point: terrorists always want something to happen on an El Al flight. They also know now that it’s useless.

What can we learn from that TSA screener?

For one thing: the TSA is a waste of time at best, and a symbol of tyranny at worst. This TSA screener is not the first to point to TSA’s failures. (This Google search proves it.) Nor to say that the TSA can make no claim to have stopped a terrorist incident.

For another: the “sequester” gives us a chance to argue for the obvious thing. Abolish the TSA, and let the airlines handle their own security. The airlines have every incentive to keep their passengers, and their equipment, safe. The TSA is not doing that for them. And hasn’t done it since Congress chartered it.

The airlines could better serve themselves, and their passengers, by hiring El Al to handle their security for them, or at least show them how. Ironically, nearly two years ago the head of the TSA said so to Atlantic on-line.

There’s a lot — under that Israeli model — a lot that is done that is obviously very effective.

So why wait for the TSA? Why not adopt that model now?

The TSA is an absolute joke, providing security theater versus true security for the most part. Like TARP, it was a case of the Bush administration throwing shovels of money at a problem instead of doing the serious work of actually trying to come up with meaningful policies & actions.

Leaving security in the hands of for-profit airlines isn’t an effective alternative, however. That was the scenario that 9/11 happened under, and none of those airlines went out of business because the free market penalized them for it.

El Al provides excellent security in a meaningful way, and their approach is what needs to be adopted here. They also hold a special place in being identified with the Israeli national identity that the multitude of major and regional carriers in the US do not. Putting blind trust in the government is careless, but so is putting blind trust in corporations obligated to drive shareholder profits while treating security as an actuarial cost/benefit case.

I’d prefer to see US airport security treated as the national defense matter that it is, with screening the responsibility of an entity like the National Guard. That doesn’t mean militarizing it, but approaching screening and security with the same balance of discipline and efficiency used to protect military assets. Military experience should also be a prerequisite. Our veterans need meaningful work, and we need screeners who understand what that means while being able to respect peoples rights and dignity.

That’s why I suggested the airlines hire El Al to show them how to do security effectively, yet with dignity.

Profit is one thing. But if the airlines put their most valuable assets, which are their equipment, at risk, that’s hardly profitable. Not for them, nor for the flying public. And any airline exec who does not know this, should resign and give place to someone who does.

Riggght, because we’ve never seen companies allow tragic accidents to happen because corners were cut, with few if any of the leaders at the top being replaced over it. At most a scapegoat or two takes the fall, and gets a package on the way out to go quietly.