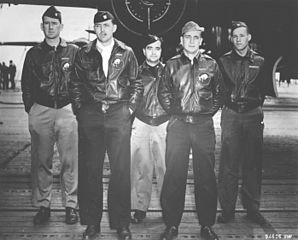 Looking around the auditorium, legends fill the room. A Tuskegee Airman subtly takes his seat in the crowd, and Medal of Honor recipient George “Bud” Day arrives in his wheelchair. Hundreds have come to honor three men standing onstage – the Doolittle Raiders.

During this handful of days, thousands of people, young and old, came out to show their support.

Doolittle Raiders – what they did

From right, retired Lt. Col. Dick Cole, Staff Sgt. David Thatcher and Lt. Col. Ed Saylor, Doolittle Raiders, stand before the aircraft they used in World War II’s Doolittle Raid, April 20, 2013 at the Destin Airport. The men were attending their final reunion together, as they are only three of the four living Raiders. (U.S. Air Force photo by Staff Sgt. David Salanitri)

The Doolittle Raiders started with 80 Airmen in their unit, but 71 years later, only four remain, the youngest being in his early 90s.

These Raiders did something extraordinary April 18, 1942 – they delivered the first blow to Japan after the attack on Pearl Harbor.

Who won the World Series 71 years ago? For that matter, who won the Super Bowl a few years ago? Seventy-one years is a long time. Things that seem important in the moment, but are forgotten easily, rarely make for impactful moments to be written in the history books of our children and our children’s children. But an event whose impact can be lived today through a country’s freedom is something few can say they’ve been part of.

The Doolittle Raiders can say this. All 80 of them. And America hasn’t forgotten it.

I can say this with confidence. For four days, the Raiders were treated like the heroes they are. People lined walls by the hundreds, waiting in line up to two hours just to shake a Raider’s hand and to get an autograph. Hurlburt Field and Eglin Air Force Base Airmen filled auditoriums in hopes to ask these Raiders a question.

The same question was asked throughout the week:

What was going through your mind knowing you’re going to take off on a mission you may not return from?

Though the responses varied slightly, the message was consistent – their only thought the mission. The feeling of fright fell to the wayside, and they focused on their task at hand – send a message to Japan that we can hurt them at home.

And that’s exactly what they did.

Under the command of then Lt. Col. Jimmy Doolittle, 80 men flew 16 aircraft off a carrier in the Pacific, dropping bombs on oil storage facilities, factory areas and military installations.

When news of the raid reached Americans, spirits rose through the roof. The raid was considered a huge psychological win.

Many things have changed during the past 71 years. Our freedom is not one of those things.

Watching folks interact with the Raiders reminds me of how folks would react to meeting Superman. Children jump at the chance to take a picture with a Raider, prodding at Mom and Dad until they get their face time with one of the heroes.

World War II veterans don their old but pristine uniforms. Cut in front of a lady who’s in line to get an autograph from a Raider, and your health is at risk – I learned this while maneuvering through the line to interview folks. Not good.

As an Airman, it’s heartwarming to see how those before me are treated. It hasn’t always been this way for those who have served. Pull aside any person wearing a “Vietnam” ball cap, and they’ll tell you that firsthand. However, first they will thank you for your service, since few have done the same to them.

Knowing that because of men like Cole, Saylor and Thatcher, I have an Air Force to serve in and freedom to enjoy … well to me … hero doesn’t do them justice. All 80 of them.

Soul of a Nation

NJGOP: when will they get it?