I do not know how many of you have been following the Obama administration’s systematic removal of religion, primarily Christianity, from the military but it is something that you should be aware of and concerned about. It is one more means by which they intend to deconstruct our society’s foundations. Religious values are what make our soldiers who they are. If you think I am wrong on this, if you think that removing God from the military will make no difference to our great society, I offer the following evidence substantiated by history to change your mind.

We are constantly told that this is no longer a Judeo-Christian nation. The progressives try to convince us that the Founders were deists and that we are now a secular society so God no longer has a place in our civil government or military.

This line of reasoning works well if the listener has no historical knowledge of the founding, the Bible or American History in general. This is, of course, the reason these subjects have been slowly removed from the government school curriculum over the last 50 or so years.

Prayer Guided Washington, His Soldiers and our Nation

The truth is that the American Revolution was fueled by biblical principles, not the least of which was prayer. I offer this famous painting of George Washington praying at Valley Forge in December as my first exhibit. 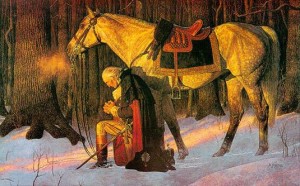 There are a couple of stories explaining the events surrounding this painting.

One such story was recounted by a Quaker named Potts. From www.USHistory.org we learn: The nearest to an authentication of the Potts story of Washington’s prayer in the woods seems to be supplied by the “Diary and Remembrances” of the Rev. Nathaniel Randolph Snowden, an ordained Presbyterian minister, graduate of Princeton with a degree from Dickinson College. The original is owned by the Historical Society of Pennsylvania. Mr. Snowden was born in Philadelphia January 17, 1770 and died November 12, 1851. His writings cover a period from youth to 1846. In his records may be found these observations, in Mr. Snowden’s own handwriting:

I knew personally the celebrated Quaker Potts who saw Gen’l Washington alone in the woods at prayer. I got it from himself, myself. Weems mentioned it in his history of Washington, but I got it from the man myself, as follows:
“I was riding with him (Mr. Potts) in Montgomery County, Penn’a near to the Valley Forge, where the army lay during the war of ye Revolution. Mr. Potts was a Senator in our State & a Whig. I told him I was agreeably surprised to find him a friend to his country as the Quakers were mostly Tories. He said, ‘It was so and I was a rank Tory once, for I never believed that America c’d proceed against Great Britain whose fleets and armies covered the land and ocean, but something very extraordinary converted me to the Good Faith!” “What was that,” I inquired? ‘Do you see that woods, & that plain. It was about a quarter of a mile off from the place we were riding, as it happened.’ ‘There,’ said he, ‘laid the army of Washington. It was a most distressing time of ye war, and all were for giving up the Ship but that great and good man. In that woods pointing to a close in view, I heard a plaintive sound as, of a man at prayer. I tied my horse to a sapling & went quietly into the woods & to my astonishment I saw the great George Washington on his knees alone, with his sword on one side and his cocked hat on the other. He was at Prayer to the God of the Armies, beseeching to interpose with his Divine aid, as it was ye Crisis, & the cause of the country, of humanity & of the world.

‘Such a prayer I never heard from the lips of man. I left him alone praying.

‘I went home & told my wife. I saw a sight and heard today what I never saw or heard before, and just related to her what I had seen & heard & observed. We never thought a man c’d be a soldier & a Christian, but if there is one in the world, it is Washington. She also was astonished. We thought it was the cause of God, & America could prevail.’ “He then to me put out his right hand & said ‘I turned right about and became a Whig.'”

It was faith that sustained General Washington, converted Mr. Potts and empowered the troops at Valley Forge to do what few men thought possible. By the time that war was over a small army of poorly trained and equipped, half starved “soldiers” defeated the largest military power on earth in order to defend, what they said were their God given inalienable rights.

Through Our Darkest Days, Prayer and the Bible Gave Soldiers the Strength to Overcome

It is faith that guided millions of fighting men and their officers through the darkest days of World War II. Though there are many examples from this era, I like this one best:

General George Patton’s Third Army led the Allied break-out of Normandy in late July 1944. By the end of September, Patton stood poised to enter Germany after liberating much of France. The weather brought the advance to a halt as an unusually wet fall bogged down Patton and the rest of the Allied forces for the next two months, while they waited for the countryside and roads to dry out.

This miserable situation drug on into early December at which time Patton was inspired to ask his Army chaplain, James O’Neill, for a weather prayer. By O’Neill’s account, the general said the weather would need to change if they were going to win the war. The chaplain composed this prayer: 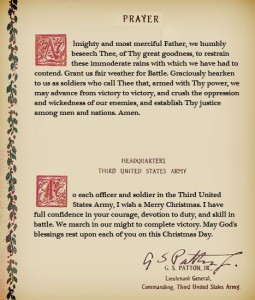 George S. Patton’s weather prayer and Christmas greeting, offered before he relieved the siege of Bastogne.

The prayer and Christmas greeting from Patton’s official website.

Patton liked it and ordered O’Neill to print 250,000 copies on prayer cards to distribute to the entire Third Army. On the reverse side of the cards was a Christmas greeting from the General. Patton then asked the chaplain how much praying the Army was doing. O’Neill said not much; when there’s fighting, everybody prays but when it’s quiet, everyone just sits around and waits for things to happen. The General responded, “Chaplain, I am a strong believer in prayer. There are three ways that men get what they want; by planning, by working, and by praying. Any great military operation takes careful planning, or thinking. Then you must have well-trained troops to carry it out; that’s working. But between the plan and the operation there is always the unknown. That unknown spells defeat or victory, success or failure. It is the reaction of the actors to the ordeal when it actually comes. Some people call it getting the breaks; I call it God. God has His part, or margin in everything. That’s where prayer comes in.”  Patton added, “A good soldier is not made merely by making him think and work. There is something in every soldier that goes deeper than thinking or working—it’s his ‘guts.’ It is something that he has built in there: it is a world of truth and power that is higher than himself.”

Patton referred to the account of Gideon in the Bible who, despite being greatly outnumbered, fought bravely and prevailed because the Lord was with him. (See Judges, Chapters 6-8). The General said that his men should be praying, wherever they were—or eventually they would “crack up.” Patton instructed O’Neill to put out a training letter for all the chaplains in the Third Army on the importance of prayer. It was circulated to the Third Army’s 486 chaplains and to every organizational commander down to the regimental level—3,200 letters. Recounting how God aided an army in the story of Gideon, O’Neill exhorted his fellow chaplains, “We must urge, instruct, and indoctrinate every fighting man to pray as well as fight. In Gideon’s day, and in our own, spiritually alert minorities carry the burdens and bring the victories.” O’Neill’s training letters and prayer cards went into the Third Army’s ranks starting 12 December 1944. Events on the battlefield turned dramatically on 16 December.

Throughout US Military History Judeo-Christian Principles Have Guided Our Soldiers

There are many stories from Korea, Vietnam and other conflicts that display the same sense of moral code demonstrated by Washington, Patton and our fighting men and women.

During the attack on Bagdad in 2003 the video below went viral. Why? Because it showed, in an inspiring way, the difference between the army of a Dictator and the Military of the United States of America. I watch this video occasionally to remind me who we are as a nation and invite you to do so now as I offer it as evidence that the Christian spirit still exists in our soldiers today.

This video, the crosses at Arlington and around the World where Americans are buried having given their lives to preserve the freedom of people, who most of them had never met, attest to the moral code under which our soldiers are expected to conduct themselves. We liberated those people and returned those countries to their rightful owners retaining no more of the land than was required to bury our dead. This is the behavior that President Obama and his cronies call “colonialism.”

The Obama administration has done everything it can to let us know that they do not understand the greatness of this country or the people who made it that way. They do not understand our Constitution and the bill of rights which guarantees our right to religion, to bear arms and to be self sustaining.

Now They Want to Make Spreading the Good Word a Court-Martial Offense!

Today the Obama Administration announced the appointment of Mikey Weinstein, founder of the Military Religious Freedom Foundation (MRFF), consultant to the Pentagon to develop new policies on religious tolerance, including a policy for court-martialing military chaplains who share the Christian Gospel during spiritual counseling of American troops. Mr. Weinstein recently explained in a column he wrote for the Huffington Post:

Today, we face incredibly well-funded gangs of fundamentalist Christian monsters who terrorize their fellow Americans by forcing their weaponized and twisted version of Christianity upon their helpless subordinates in our nation’s armed forces.

Lack of Understanding or a Campaign to Destroy Our Society?

Why is it that our esteemed President, a self proclaimed Christian and Professor of Constitutional Studies, does not seem to understand or like Christianity or our Constitution? Why is it that our President will not enforce our immigrations laws, obey court orders, adhere to the Constitutional restrictions on his office, honor his Oath of Office to protect and defend the Constitution from enemies foreign and domestic, and why does his appointee Mr. Weinstein regard Christians as “monsters” while the administration refuses to acknowledge the existence of Islamic terrorism? Why does Mr. Weinstein want our soldiers to be like those of a dictator?

Dare we ask the question that is on many peoples’ minds; is it possible that Barack Obama is not who he says he is and that rather than wishing to protect Americans, actually wants to do them harm. Is the soul of our nation in mortal jeopardy?