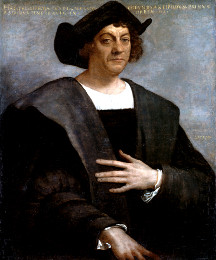 Point to Consider and Remember:

The Bible tells us to be equally yoked. While this verse is traditionally used to dissuade believers from marrying unbelievers, a reading of the verse says that it applies to more situations than marriage. It reads:

Do not be unequally yoked together with unbelievers. For what fellowship has righteousness with lawlessness? And what communion has light with darkness? (2 Cor. 6:14, NKJV)

As we go through this study, we will see that Columbus had many personality flaws but he was also negatively influenced by those around him. Had he made himself accountable to those with high moral and spiritual standards, he may have avoided many of the pitfalls that he is about to encounter. This is a point to remember as we proceed.

The tension between Columbus and everyone else on the expedition created great stress. The Pinzon brothers begged Columbus to abandon the mission. Columbus managed to bargain for another three days – bringing them to the historic October 12th, which we celebrate as Columbus Day.

During those three days, Columbus’ ships covered 59 leagues per day – a very fast speed, which frightened the crew more. In order to pacify them, Columbus promised them they would share in the wealth, as well as a prize of 10,000 maravedis for the first person to spot land. He also reminded them that complaining at this point in time was useless.

On October 11th, signs of land in the form of a reed, a small piece of carved wood, and a small twig with a rose on it were spotted. This changed the mood of the crew dramatically and on the 12th, history was made when the Pinta spotted a white cliff shining in the moonlight at 2:00 PM in the morning.

As would be expected, Columbus was the first to set foot on land. He carried the royal standard. The Pinzons carried a banner with the crown initials, but it was the sailors who planted and 8-foot oak cross on the beach. Columbus christened the land San Salvador, meaning Holy Savior. Then they all prayed. The expedition went on to discover the islands of Cuba, Española, and La Navidad. Weather prohibited them from traveling northward and discovering Florida.

Columbus and the natives

When they discovered the natives, Columbus was still thinking “Christianly,” at least according to his journal, which recorded:

…I believe that they (the natives) would easily be made Christians, for it seemed to me that they had no religion of their own.

After these discoveries, Columbus made the decision to leave men behind on La Navidad and bring back six natives to Spain to learn the language so that they would become interpreters.

However, there is no indication that either Columbus or the men he left behind ever made an attempt to convert the natives to Christianity. And unfortunately, Columbus took the natives forcibly from their homes, which was a decision that has been viciously maligned in history books.

Point to Consider: Often in life we make decisions without counting the cost. I have complained many times that our legislators make decisions that seem right but don’t turn out right. I say they didn’t count the cost. Given that hindsight is 20/20 and I’m telling you that this decision set a poor precedent, do you think that you would have agreed or disagreed with Columbus’ decision at that time?

Point to Consider: I have seen many times in many well-intended ministries that growth and inspiration is eventually thwarted by the person in charge taking charge. There seems to be a fine line between working for God on a mission and then protecting the mission to the point where God is no longer considered. Columbus seems to have done just that. He followed his calling but once he reached his destination; it’s almost as if he told God, “It’s okay. I’ve got it from here.” Unfortunately, that attitude left him open to more humanistic than spiritual guidance.

Columbus and the lure of gold

Then, the worst thing possible happens to Columbus: he discovers that some of the natives are wearing gold. The authors tell us that although Satan was unable to discourage Columbus from persevering to accomplish this mission, Satan was able to undermine him using his lust for riches – more specifically – gold.

After Columbus notices the gold, he spends much time with the natives. Nowhere is there any accounting of Columbus introducing them to Christianity. The focus of the mission becomes the search for gold.

Luke 16:13 tells us that you cannot serve two masters. Columbus tried but may have been lying to himself.

Read Jer. 17:9-10. Once again, had Columbus surrounded himself with like-minded people, perhaps they would have been able to draw him back to his original calling.

God is faithful even when we are not. Toward the end of Columbus’ voyage back to Spain, his crew experienced life-threatening storms. It was truly a miracle that they survived.

Columbus rightfully understood that God was speaking to them through the storms. His journals recorded that he knew God had a reason for allowing the storms. Columbus resolved to come up with an earthly way to satisfy God. He believed and convinced his crew that they could make atonement to the Lord on their terms. Never once did he look to his own heart as the culprit. After four drawings to determine who would personally make the atonement, in which Columbus’ name was drawn three times (the authors calculated the odds of that to be 60,880 to 1), still Columbus didn’t turn to his own heart and behavior but thought that God was somehow favoring him because he was the leader of the expedition. Lust for gold distracted him from his mission, and pride closed his ears to what God was trying to tell him.

IMPORTANT QUESTION: Do you have a friend or if you are blessed, friends, who can help turn you back onto the right path if you are going astray? If we are honest, we will admit that we all stray at times. Having godly people around can make all the difference in our lives. All the riches and fame in the world will mean very little if you end this race on your terms instead of God’s.

Did Columbus lose his first love?

Columbus made a common theological mistake. He offered God deeds but God wanted his heart. He may have praised God but his heart was far from him. His heart was not after God, it was after gold.

Rev. 2:1-5 is a message to the Church of Ephesus, which had lost its first love. In a very significant way, this is what happened to Columbus. He convinced the world (and himself) that the purpose of his mission was to spread Christianity. As soon as he first tasted success, the purpose of the mission changed dramatically. In the Book of Revelation, the works of the Church of Ephesus are acknowledged. Columbus displayed many of these wonderful traits. Unfortunately, he also lost his first love. In verse 5, the Ephesians are admonished to remember where they came from, to repent, and return to their early works.

The size of the mission is not important – perhaps you should even consider your marriage or a relationship that has gone awry. Every marriage begins with hope but statistics tell us that over half end in divorce. Something goes wrong somewhere along the line.

Looking at things is easy. Looking at deeds is also easy. Looking at one’s inner heart, is not easy. It should be the first place we look but often it is the last. We can see it in the life of Columbus. We may even be able to see it in the lives of church leaders, friends, neighbors, or family members, but do we see our own heart or do we lie to ourselves as Columbus often did?

In today’s “me” generation, where self-gratification is king, it is easy to attribute everything that is wrong in the world to someone else – especially our politicians. The truth of the matter is that these people would not represent us if we aspired to a higher standard. But that standard must first be established in our own hearts. Perhaps that’s America’s biggest problem. We don’t look inward. We look outward. It may be time we stop looking at the spec in the eyes of our representatives and start dealing with the planks in our own eyes.

Light and the Glory: Nehemiah, Columbus

First Spanish Settlements in America - History for My Kids