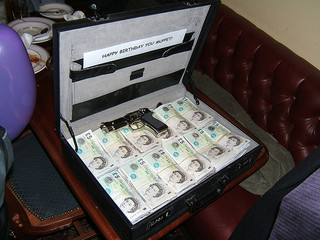 A dear friend of mine who is somewhat interlinked with the Republican Party in New Jersey, after a few cocktails, to my surprise blurted out words to this effect.

Wow, did that come from left field! Shocked, I retorted:

Like hell I’ll leave! If you can accept having your pocket picked, fine. I’m sick and tired of paying higher taxes every year and seeing the unnecessary waste of my tax dollars. If you have a problem being in my company, no problem, enjoy your friends. I couldn’t care less. But in truth I cared for this individual and still do.

So let’s take a look at what brought on the confrontation. I and others reviewed the legal fees being expended on attorneys being retained by Wall Township, New Jersey, and what I considered political payoffs under the “color of law”. I’m going to address what’s taking place in just two townships and you will understand the old expression, “All zoos are the same.”

Wall, for example, from 2002 to 2006 had one attorney on retainer. He alone raked in two (2) million dollars, to include health coverage for his entire family. Let’s move the clock up to the last 28 months ending April 2013. Wall Township retained none other than the former GOP Chairman for Monmouth County, New Jersey, one Joe Oxley, one of many on retainer. He received approximately $530,000.00 and his firm is still billing Wall even when Assemblyman Seam Kean is now the Township Attorney.

Keep in mind he’s just one of many. Another is our so-called expert COAH [Council On Affordable Housing] attorney. He has raked in close to $2-million over the years. You would think someone would have noticed. We still haven’t computed the total cost to the taxpayers of Wall on all attorneys on record.

After reviewing the monies expended on legal fees we demanded the township remove Mr. Oxley, this after he refused to make public the FBI report concerning his involvement with Solomon Dwek, a convicted felon. The township should then retain an in-house attorney.

We repeatedly reminded the Committee that an in-house attorney would save the Township 100’s of thousands of dollars. This was proven, when to his credit Mayor Walsh of Howell removed all retained attorneys and hired an in-house legal adviser.

The only member of the Township Committee to agree was Todd Luttman, now the Mayor. Instead of doing so, the Township Committee decided to retain an outside attorney: none other than Assemblymen Sean Kean, at $275,000.00 a year. Again mind you, Assemblymen Kean is one of many on Wall’s legal payroll. As if Wall needs to expend monies for an attorney to sit in on every township meeting, even when no legal matter is pending.

Just for your general information, since 2007 we here in Wall have seen a 40% increase in just our municipal taxes. They claim they are doing more with less. Yeah and I’m Superman. Unbeknownst to the residents of Wall, while we were arguing that outside attorneys are costing us dearly, the residents of Jackson Township were arguing the same issue.

All Zoos are the same

Jackson, New Jersey, and their saga of retained attorneys

To their credit, the residents of Jackson are fed up with ridiculous legal costs being paid to retained legal counsels by the municipal government and the Jackson School District Board of Education. Not only suggested an in house legal team and the benefits to the taxpayers; They submitted a comprehensive study titled “Jackson Township Feasibility Study In-sourcing Legal Department” produced by Raymond Cattonar with assistance from Jackson resident Catherine Giancola.

“We are trying to persuade the council to put [the issue] on as an ordinance,” said Cattonar, who concluded that “the intangible benefits can far outweigh the cost savings by significantly improving efficiency for both the municipality and K-12 school district.”

According to the study produced by Cattonar, Gilmore and Monahan Associates, the firm that currently provides legal representation for the municipal government, has been paid an average of $333,000 a year since 2008. Initial estimates put this year’s total legal fees at more than $400,000, and average annual legal expenses for the school district, at more than $300,000 a year since 2008 by another retained legal firm.

As usual the legal shysters and the Township Committee gave the residents the same song and tap dance we at Wall received, claiming a legal department that would serve the municipal government and the school district could cause a conflict of interest. Mr. Cattonar has researched this fallacy, just another lie each township committee and their shyster spews out.

To his credit, Mr. Cattonar, who devoted more than two decades researching companies, believes that if the township adopts the guidelines outlined in the study, Jackson would be “the standard model for other townships to follow.”

It’s about time our town started focusing on issues to reduce costs, instead of spending,

Mr. Cattonar and the residents of Jackson’s taxpayers, not to be deterred, demanded the township reprobates place a referendum on the ballot to let the citizens decide the matter if the governing body declines to act on their proposal. As is the modus operandi in almost every municipality, the governing body believes they know what’s best for the citizens, and the taxpayers be damned. Why consolidate and save the taxpayers money? How can we pay off our friends?

The Township’s reply that the initiative for consolidation of the legal counsels for the township and the Jackson School District is inappropriate and the wrong focus. So, to stop any initiative, these demagogues have instituted a legal action against the taxpayers, in short, to cease and desist.

Other lowlights of corruption in Jackson

These are not the only issues concerning waste in Jackson. There are two other issues that the demagogues are ignoring (they have to keep the cronies employed and paid off). I’ll quote from the Tri-Town News.

We here in Wall are watching. It’s time these reprobate politicians realize we are tired of their “Public be damned” attitude and using our tax dollars to support their friends and political contributors and cronies.

Wall is with you Jackson, prayerfully other townships will wake up and start reviewing their township books and thereafter throw every one of the bums out. Most importantly, every township should have an independent forensic audit. New Jersey didn’t get the title of the “Most corrupt State in the Union” for nothing. It’s time for every group to unify and support the citizens of their sister municipalities.

It’s time to throw the bums out. A special thanks goes out to two true patriots Ray Cottonar, Catherine Giancola and thanks to Tri-Town News for reporting the story.

Related Topics:corruptioncrimepoliticiansTea Party
Up Next

Obamacare, web sites, and a web of lies