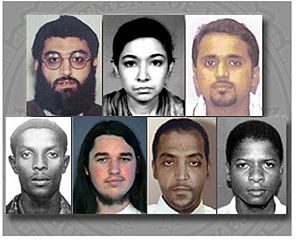 This week we are hearing much about Al Qaeda’s increased activity, as well as the Ft. Hood trial. Although most would never say that terrorism is dead (except for Mr. Obama), many misidentify the full breadth of terrorist organizations working against the American way of life.

How the government defines terrorism

In a report issued on January 31, 2012, that was requested by Homeland Security 1” terrorism is defined as:

…The threatened or actual use of illegal force by non-state actors, in order to attain a political, economic, religious or social goal, through fear, coercion or intimidation (emphasis added). It is important to note that the classification of an event as terrorism depends as much on threats as the actual use of violence. For example, instances in which individuals seize an aircraft and threaten to blow it up unless their demands are met are defined as terrorist events. Note also that by specifying the threatened or actual use of force the definition of terrorism used by the GTD excludes hoaxes. The requirement that these events be limited to the actions of “non-state actors” means that considerable violence and terrorism that is directly attributable to states or their militaries is also excluded. And the requirement that the act have a direct political, economic, religious or social goal means that ordinary criminal violence is excluded…(Emphasis added.)

The terrorism categories in the report are listed below 2 with emphasis added:

Composite of the terrorists most wanted by the United States, 2004-2005. Photo: Federal Bureau of Investigation

Extreme Right-Wing: groups that subscribe to aspects of the following ideals: they are fiercely nationalistic (as opposed to universal and international in orientation), anti-global, suspicious of centralized federal authority, reverent of individual liberty (especially their right to own guns, be free of taxes), believe in conspiracy theories that involve grave threat to national sovereignty and/or personal liberty and a belief that one’s personal and/or national “way of life” is under attack and is either already lost or that the threat is imminent (sometimes such beliefs are amorphous and vague, but for some the threat is from a specific ethnic, racial, or religious group), and a belief in the need to be prepared for an attack either by participating in paramilitary preparations and training or survivalism. (2011: 26)

Extreme Left-Wing: groups that want to bring about change through violent revolution rather than through established political processes. This category also includes secular left-wing groups that rely heavily on terrorism to overthrow the capitalist system and either establish “a dictatorship of the proletariat” (Marxist-Leninists) or, much more rarely, a decentralized, non-hierarchical political system (anarchists). (2011: 24)

Religious: groups that seek to smite the purported enemies of God and other evildoers, impose strict religious tenets or laws on society (fundamentalists), forcibly insert religion into the political sphere (e.g., those who seek to politicize religion, such as Christian Reconstructionists and Islamists), and/or bring about Armageddon (apocalyptic millenarian cults; 2010: 17) For example, Jewish Direct Action, Mormon extremist, Jamaat-al-Fuqra, and Covenant, Sword and the Arm of the Lord (CSA) are included in this category (2011: 18).

Ethno-Nationalist/Separatist: regionally concentrated groups with a history of organized political autonomy with their own state, traditional ruler, or regional government, who have supported political movements for autonomy at some time since 1945 (2011: 18).

And who cannot be a terrorist?

The report casts a wide net that can be stretched to include anyone with strong convictions or anyone challenging the government in any way, shape or form. It would almost be easier to ask: Who does not qualify as a terrorist? The answer is simple: the government!

Since “government” will not define government terrorism, the job is left to We the People.

How We, the People should define terrorism

Before doing so, you must consider if you believe that terrorists can and should include people who threaten the liberties and the “general welfare” of this nation. If so, then many of this country’s most fearsome terrorists live in Washington DC and are supported by our tax-payer dollars.

In short, they have assaulted our liberty of conscience, our health, our children, our finances, our system of law, our ability to earn an honest day’s pay, and have threatened all we own and our right to defend ourselves, as well as our national sovereignty and national security. In my opinion, no Al Qaeda operative can do more to harm this country than our judges, this current Administration, and the super majority of congressional representatives currently residing in Washington DC.

In light of all of the above, I suggest the proper definition of a terrorist be revised as follows:

The threatened or actual use of illegal or unconstitutional force by any individual, group or association, or any government entity, actor, or representative, in order to attain a political, economic, religious or social goal, through fear, coercion, intimidation, or through the use of unconstitutional legislation, judicial unrestraint, or executive orders.

The Light and the Glory study, will resume next week with Lesson 5, which will be based on Chapter 5. Also, credit given to John Silveira for inspiring this article.

“This report is part of a series sponsored by the Human Factors/Behavioral Sciences Division, Science and Technology Directorate, U.S. Department of Homeland Security, in support of the Counter-IED Prevent/Deter program. The goal of this program is to sponsor research that will aid the intelligence and law enforcement communities in identifying potential terrorist threats and support policymakers in developing prevention efforts.”

2 Detailed information on each category of ideological motivation can be found in the Profiles of Perpetrators of Terrorism-United States report compiled by the National Consortium for the Study of Terrorism and Responses to Terrorism (Miller, Smarick, and Simone, 2011).