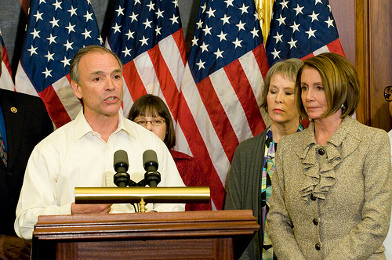 Kathleen Sebelius delayed the individual mandate for some (not all) who buy insurance for one person or one family. She might have thought she’d calmed the fears of her co-factionalists in the Senate. She didn’t. One Democratic Senator on Sunday forecast an Obamacare meltdown. He said it to Candy Crowley, she of the Obama-Romney foreign-policy debate. And the Democrats have good reason to fear an Obamacare meltdown.

Manchin introduced a bill to delay all Minimum Coverage Mandates under Obamacare for one year, that is, to 1 January 2015. Yesterday (22 December), on CNN’s State of the Union program, he explained his reasoning to hostess Candy Crowley:

If it’s so much more expensive than what we anticipated and if the coverage is not as good as what we had, you’ve got a complete meltdown at that time.

Meltdown. Yes, he said it. Robert Menendez must still cringe at that.

And how might the Obamacare meltdown come about? Clearly the senator fears the Death Spiral. Young people are not signing up. He knows it. If they don’t, premiums and/or deductibles will rise further., And fewer people will sign up. Eventually only the old and the sick will sign up. And in that event:

It falls of its own weight, if basically the cost becomes more than we can absorb. absolutely.

He also suggested the Obamacare meltdown might cost the Democrats control of the Senate. He seemed reluctant to say it out loud:

I’m not going to say that I think we will lose it (the Senate). It’s going to be extremely challenging. We have some very good people who are truly there, I believe, for the right reason. They’re going to be challenged for the wrong reason.

Mark Horne of Political Outcast pointed out one thing neither Crowley nor Manchin dared talk about. The Obamacare meltdown will collapse the liberal system of entitlements. Why? Because America is not prosperous enough to carry on in spite of it. Two weeks ago he offered some dire statistics, and quoted Michael Tanner at The New York Post:

The good news, if you want to call it that, is that roughly 1.6 million Americans have enrolled in ObamaCare so far.

The not-so-good news is that 1.46 million of them actually signed up for Medicaid. If that trend continues, it could bankrupt both federal and state governments.

Today Horne discussed just how close an Obamacare meltdown now is: closer even than he expected.

While I never expected Obamacare to be great, it never needed to be this bad.

No one did. Least of all Barack Obama and his administration. Horne blames Obama and his officers for believing their own hype about what they and their system could do. But he also said the country is broke, which it wasn’t twenty or even fifty years ago.

We have an economy weakened by years of over-spending and insolvent entitlements.  Perhaps there was a time when America was prosperous enough to absorb the damage of Obamacare and allow propagandists to get away with focusing on its alleged benefits. But because of past government programs and central-bank machinations, we are no longer that prosperous.

That’s why the Obamacare meltdown will happen. And that’s why it will also “melt down” the rest of the entitlement system.