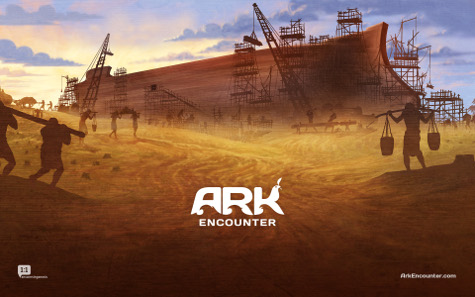 The Bill Nye-Ken Ham debate had a side effect Bill Nye did not look for. Ken Ham secured the last funding he needed for his Ark Encounter project. And Ken Ham credits his debate with Bill Nye with that success.

Ken Ham announced his funding breakthrough last night on a live Internet stream. (YouTube has the archive here.) In addition, the Associated Press ran this report from interviews with Ken Ham, Bill Nye, and Mark Looy, director of communications for Answers in Genesis. 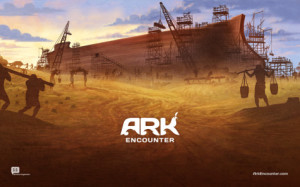 Artist’s concept of Noah’s Ark under construction. The construction crew could have come from a civilization equal to that of ancient Egypt. Graphic: Answers in Genesis

Ark Encounter began in 2010 as a concept for a theme park built around a replica of Noah’s Ark, a concept of an antediluvian city, several animal exhibits, and theaters offering various presentations. But donations did not keep up with the proposed building schedule. So officials split the project into several phases. Phase One will include the Noah’s Ark replica, the project’s reason for being.

In December of 2013, Ark Encounter LLC started negotiating with the city of Williamstown, Kentucky, for a municipal bond issue. That bond issue suffered several setbacks. Ken Ham vaguely blamed these on “misleading media reports and attempts by opponents to disrupt the bond offering,” according to the AP.

Ken Ham also gave these details of the “obstacles” to the bond issue:

Many challenges and road blocks came up as we worked through the stages of the bond offering leading up to the final bond delivery. From atheists registering for the bond offering and attempting to disrupt it, to secular bloggers and some reporters writing misleading and inaccurate articles about the bonds—the obstacles were numerous and disruptive.

Answers in Genesis officials could not be reached for comment today. But in addition to their news release, they also released this rebuttal to many of Bill Nye’s arguments that Noah’s Ark was not feasible.

Bill Nye reacted in anger and anguish to the news. The AP described his reaction:

Nye said he was “heartbroken and sickened for the Commonwealth of Kentucky” after learning that the project would move forward. He said the ark would eventually draw more attention to the beliefs of Ham’s ministry, which preaches that the Bible’s creation story is a true account, and as a result, “voters and taxpayers in Kentucky will eventually see that this is not in their best interest.”

Tyler Francke, author of the “God of Evolution” blog, said this:

No passage in scripture…could be construed as a command for anyone to build a theme park centered around a useless boat that is about as capable of braving the high seas as the Taj Mahal, or to spend a fortune reinforcing the demonstrably false scientific beliefs of conservative Christians in Appalachia, while billions the world over go to bed hungry every single night.

Francke offered twenty-eight illustrations of what $70 million could buy “for the poor.” Of what he would have said, had he been present when an unnamed woman washed Jesus’ feet with expensive perfume, he gave no hint in the main body of his piece.

A reader called him out on this very question:

After reading Matthew 25 we find Matthew 26:9, where someone who sounds a lot like you insisted the woman with the alabaster vial of precious ointment should have sold it and given the money to the poor. I am so saddened by your self-righteous indignation.

Francke made this reply:

Your comment is a little muddled, but are you seriously arguing that it is biblically defensible to spend millions reaffirming beliefs that some Christians already hold, rather than using it to save lives, serve the needy and spread the gospel, as all of the real ministries I mention here do? If that’s the case, then you’re right that one of us is very far afield from the teachings of scripture, but it’s certainly not me.

Jesus responded to a question about divorce with a theological teaching from Genesis 1. It is quite an enormous leap to extrapolate from this that “He believed the Genesis record of history” – by which, I take it you mean, “he would have agreed with all of the fanciful and unbiblical fairy tales perpetuated by the likes of Ken Ham.”

Even if Jesus, while he was in the flesh, did believe the earth was only a few thousand years old – rather than billions – he certainly never said or did anything that would imply that he thought the gospel depended on that belief. And if the belief in a young earth is not necessary for anyone’s salvation, then why do you think this $70 million is being well spent?

(Mr. Francke protested in writing, to another forum where this article also appeared, that he could have been reached for comment after all. In fact he does sign his article with a hyperlink to his e-mail address. This correspondent regrets not contacting him through that link to begin with.)

Walt Brown, of the Center for Scientific Creation, wished Ken Ham and Ark Encounter well. He also confirmed that the Bill Nye-Ken Ham debate “moved the creation and evolution issue from the back burner to the middle burner” of American thought. To support this, he cited sales figures and rankings from Amazon.com of three creation-oriented titles. They included his own work, In the Beginning: Compelling Evidence for Creation and the Flood. Sales and rankings jumped in the weeks following the debate, he said. He also noted that, for one week, the YouTube archive of the Nye-Ham debate temporarily eclipsed his own work in the Google rankings in a search on the keywords “creation,” “evolution,” and “flood.” (Today such a search lists his Web site at the top.)

Brown hoped the Ark Encounter project would change at least some minds. But he admitted only those without a firm opinion on creation v. evolution (that is, stronger than mere leanings) were likely to change their minds. But those same persons were far more likely to embrace or lean to creation than evolution.

Related Topics:biblecreationevolutionscientific theory
Up Next

War on humans? A review